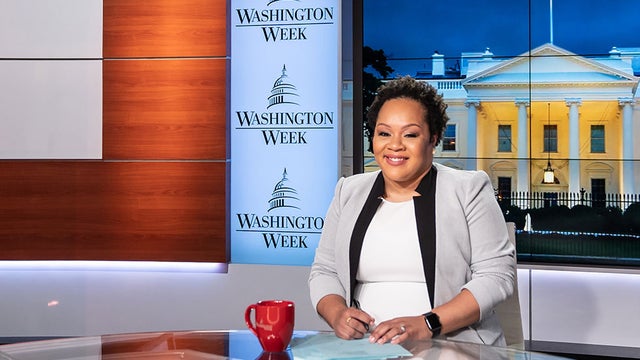 It’s shaping up to be a hectic day for Yamiche Alcindor, the “PBS NewsHour” White House correspondent. It’s 9:30 a.m. on this Tuesday in June, “and I’m literally ordering lunch right now,” she said.

On this day, the Senate was to vote on an election overhaul bill called the For the People Act. (The bill reportedly needed 60 votes to open floor debate but ultimately only received 50.)

It has been a whirlwind few months for Alcindor. In early May, PBS announced her promotion to serve as moderator for the award-winning “Washington Week” news series, a Friday evening staple since 1967.

She is now just the ninth host for the longest-running prime-time news and public affairs program on television. “I’m excited about meshing the legacy of the show and my ideas,” she told PRsay in a phone interview.

Alcindor, who’s also an NBC News and MSNBC contributor, will deliver a keynote address at ICON 2021 on Oct. 18. Ahead of that, the highly regarded journalist discussed her role as moderator of “Washington Week,” the elements of a compelling story and the challenges of achieving work-life balance.

As moderator of “Washington Week,” what is your mission statement?

To center the show on being relevant to people’s lives and to illuminate the dynamics at play in Washington between power and politics. I want people watching at home to see that we are asking the questions they want to be answered as everyday people who are just trying to survive and thrive. I also want people to learn a little bit about how politics actually happen and the behind-the-scenes things that we sometimes don’t get to report on.

How have you balanced putting your own stamp on the show with maintaining its legacy?

I’m finding it easy to balance what I want to do for the show and the legacy of “Washington Week.” The legacy of this 54-year-old establishment show — that always did more than just sit around a table and talk to reporters — is that it has brought together the best minds. “Washington Week” has always been about discussing the most important topics of the day. It was about having specials, not just a 30-minute show on Friday. You could do other things with the format.

We recently did a special on George Floyd where we talked about the anniversary of his death and what it meant to American politics and American life. I was able to put my mark on the show with this special.

From your perspective, what elements make a compelling story?

Emotion, illuminating the human experience and allowing the audience to be empathetic with the people’s stories they’re learning about. A great story connects to a person’s everyday life.

In early June, Naomi Osaka withdrew from the French Open after its organizers threatened to expel her for not honoring media commitments. She later cited mental health issues. Her decision prompted discussion on the usefulness of press conferences, especially in the sports world. Do you have any ideas about how press conferences might be rethought?

Naomi Osaka is one of my heroes. She’s an amazing young woman. She should be allowed the mental space to be as healthy as possible to be at the top of her game. Especially after a year like 2020, when we saw so much death and sorrow, we should be even more concerned with how people are able to function.

The press conferences that I attend are usually with elected officials who are beholden to the people who put them in power. For that, press conferences are very useful. We should regularly be able to question the President of the United States and elected officials. We should have conversations about the laws in our country, why politics are happening the way they are, what the agenda items are in the middle of a pandemic. We need to regularly be asking what society and the government are doing to help people.

As a journalist, what’s your role in helping stop the spread of misinformation and disinformation?

We have to try our best to put out truthful information. Our role is to tell the truth and to hope people will hear it. We are living in a politically polarized society. People come, at times, to the news with their own political agendas that influence how they take in information. But as reporters, the No. 1 thing we should do is try to be as fair and accurate as possible.

You’re active on Twitter, an environment that can be toxic. How do you avoid taking pointed replies and comments about you personally?

I try to do my job as best as possible. A mentor gave me great advice when I was starting out: Be too busy to be distracted by what people think about you. That has served me well. I don’t worry about what people think of me.

Twitter replies can be helpful. Sometimes reporters make mistakes, or there’s a better way to explain something. It’s still useful to hear from people. But I don’t take meanness to heart, because you can’t.

How do you try to maintain a healthy work-life balance?

I’m married to a journalist. We’re each other’s editors, constantly talking about stories. We find it exciting. But as someone who’s been married for a couple of years now, I’m still in the early stages. I want to spend time with my husband, to go on vacation, to watch movies. I skip home into my husband’s arms. I’m so in love with my husband. I also have great friends, who I want to talk to and spend time with. I try to make time for that.

I’m not sure that I have a healthy work-life balance. I don’t know what that looks like. But I take care of myself and take days off when I need to. Especially last year — I would not have survived without my family and my friends and my husband. I cherish that.

Where do you see yourself in five years?

I hope to continue living my purpose and telling stories that illuminate the human condition and the influence of power in politics. I hope “Washington Week” will still be thriving, that I will be helming that chair, and that it will get better and better. I hope people will feel that I’m doing them a service by having that show.

And I hope that I’ve leaned into the idea that I’m an anchor now and that I deserve and have earned everything I’ve gotten. I hope that I have leaned into being as ambitious as I want to be — while also, of course, being healthy and happy.