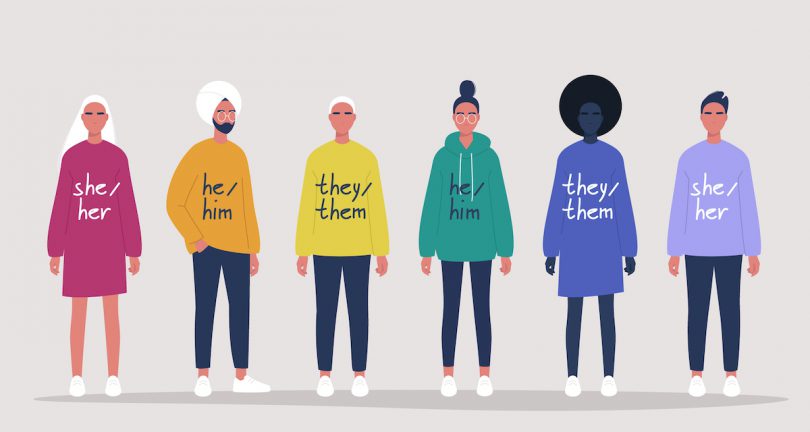 On a recent Zoom call, you probably saw a few attendees with a display name followed by their preferred pronouns in parentheses. Or perhaps you attended a gathering where you were invited to introduce yourself and include your preferred pronouns in your introduction. Instagram provided a new option for preferred pronouns to be added to your display profile. For some, talking about pronouns may be new or unfamiliar and, if the individual prefers “they/them” in the singular, some may see this as grammatically incorrect.

However, for many in transgender, gender non-conforming and intersex communities, being able to represent their gender identity through the use of their preferred pronouns is a way to be seen and respected for who they are, and reduce experiences of being misgendered and misidentified by incorrect gendering.

I’m a cisgender — my gender identity corresponds with my birth sex — Black woman who uses the pronouns she, her and hers. While I have not personally experienced misgendering, I can imagine what it might feel like to be misidentified in public spaces. Recently, my race/ethnicity identity was publicly misidentified in a meeting with colleagues.

Immediately, I felt unseen and minimized and had difficulty participating in the rest of the meeting. I felt publicly humiliated and othered. It was an awful feeling that lingered for many days afterward. When we do not use the appropriate pronoun or ask people their pronoun preferences, we make them feel unseen, unwelcome, excluded, and often unsafe and threatened.

Preferred pronouns: Which ones should I use?

Here’s a quick primer on personal pronouns via CNN and Upworthy:

• They are the words used in place of specific people, places or things. “Me, myself and I” are how people talk about themselves. “You, she, he and they” are pronouns people use to talk about others.

• The most common third-person singular pronouns — pronouns for people to use when speaking about someone — are “she/her/hers” and “he/him/his.” “They/them” can be used to refer to a single person, while some use gender-neutral or gender-inclusive pronouns like “ze/hir” instead.

• In 2019, Merriam-Webster updated its entry for “they” to include the nonbinary pronoun among its definitions. It also named “they” as its word of the year.

We represent people and their identities in our communication through the words we use to paint a portrait or perspective of a person. Asking for and then using individuals’ preferred pronouns is a way of accurately and respectfully representing an individual in the messages and content we create. Including an option for preferred pronouns on event name tags or introduction scripts at small and large meetings and events can help you and other people make informed word choices when conversing and facilitating dialogues.

Misgendering is more than using the wrong pronouns. It can also be the words and phrases that communicate gender, often casually. As a former Californian, I’ve had to work hard to eliminate male gendering terms such as “dude(s)” and “guys” from my conversation when referring to a group of people — especially a mixed-gender group of people.

As we evolve and expand our language, there are going to be missteps that intentionally or unintentionally cause harm. Many. When that happens, it’s important to acknowledge and apologize directly and privately for your word choices creating harm to the individual and to minimize additional harm, embarrassment or othering.

After talking with the individual, find a way to share your lesson learned with peers, clients and audiences. We’re all learning and sharing that knowledge, and your willingness to acknowledge the harm caused and sharing how you resolve it will demonstrate your commitment to being an inclusive, respectful communicator.

Maya Angelou said, “I did then what I knew how to do. Now that I know better, I do better.”

We need to examine and address the gender-specific policies, procedures and systems that foster bias, discrimination and exclusion of transgender, gender non-conforming and intersex communities. That systemic change will take time.

However, as communicators, we have the opportunity right now to change the way our language and content represents and includes LGBTQ+ identity communities by simply asking for and using preferred pronouns. That adjustment alone will help us do better and support more people feeling seen, valued and respected.

PRSA member Crystal Borde is a vice president and the diversity, equity and inclusion practice lead at Vanguard Communications in Washington, D.C. She is a member of PRSA’s National Capital Chapter’s DEI Committee.