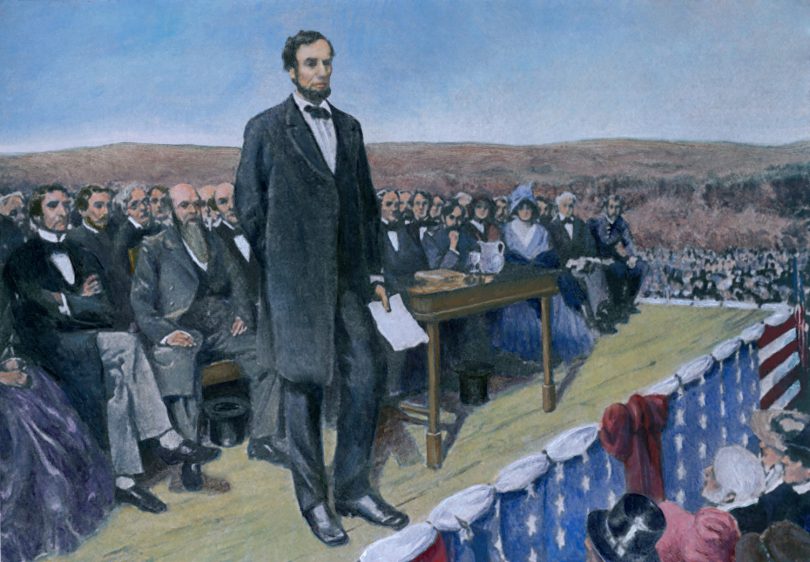 “I’m sorry there’s nothing going on in the world to talk about. There’s a very quiet, uninteresting election… and the country seems so unified and pulled together that you have to search for division and conflict,” deadpanned the presidential historian and Pulitzer Prize-winning author. 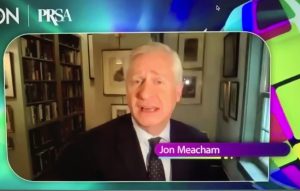 “I’m a historian. I’m not a partisan. I’ve voted for Republicans. I’ve voted for Democrats. I plan to continue to going forward. I’m George H.W. Bush’s biographer and I’m on MSNBC,” he said. “So you try to figure out exactly where I can be pigeonholed.”

According to Meacham, there are many people who believe that the country has never been more divided than we are now — with the possible exception of the 1850s.

However, in his view, our country has been through similar struggles in the past and can once again emerge stronger than before. During these contentious times in America today, he said there are two things worth avoiding in our public conversations.

“One is nostalgia, which is the sense that things were always easier in the past. The other is the narcissism of the present, the notion that our problems, our challenges are insuperable and uniquely oppressive,” Meacham said during a thoughtful 45-minute talk. “Avoiding nostalgia is important because, if everything in the past was easier, that forecloses the possibility of learning from it.”

He said that history is not necessarily a GPS, but a diagnostic guide.

“There are certain forces and conditions that present themselves anew and suggest a certain diagnosis, and we know from experience what steps can be taken to ameliorate conditions of the present and truly create that more perfect Union,” said Meacham, who won the 2009 Pulitzer Prize for his book “American Lion: Andrew Jackson in the White House.”

Meacham went on to discuss characteristics that have marked American generations — both of leadership and of followership.

During his speech, which amplified the themes of his 2018 book, “The Soul of America: The Battle for Our Better Angels,” Meacham noted that divisive politics and political acrimony have been near-constant in the United States, and the lessons of the past can lead us into the future.

The common denominator is not a party label of the past or loyalty to whatever conservatism or liberalism means in a given moment, he said.

“The common denominator is adherence to the very American tradition, the enlightenment project that, in fact, we are created equal and that everybody should have what [President Abraham] Lincoln called an open field and a fair chance to rise as far as their industry, intelligence and enterprise could take them.”

“And if that’s the test, then, every day, we have the ability to see whether we are being true to those better angels or whether those darker impulses of selfishness are being predominant,” he said. “This is incredibly empowering because it means that every problem we confront in our public or private life has a pretty clear test. We can decide if we are being generous or if we are being selfish, and sometimes we’re going to choose the selfish path — that’s human nature.”

Three characteristics have emerged from American history to help us meet this test: courage, honesty and empathy.

Courage is essential, he said. “Hope is always, ultimately, more strengthening and vital than fear.” Of honesty, he said: “When in doubt, tell the truth.” And empathy? “Without it, the republic falls.”

As election day nears and as we confront daily life moving forward, Meacham said to think about the decisions that we make.

“Do they fit on a spectrum where we’re all in this together, or are they more likely to fit in the spectrum where people have automatic authority over all of us?” he said. “I think America is at its best when we’re in this together. We can think for ourselves, we can make the best decisions we can and press forward.”

[Illustration via the everett collection]