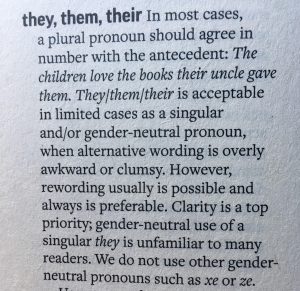 As PR practitioners, we’re called upon to be creative and clear in our writing, and to follow rules of spelling, punctuation, grammar and style. Therefore, it’s logical for us to regard The Associated Press Stylebook as “the bible” for all things written.

With this in mind, it was a relief for me — the vice president of the board for PFLAG Columbus, a local chapter of the national organization that promotes dignity and respect for LGBTQ people — when AP announced new guidance on the use of “they” as a singular, gender-neutral pronoun in stories about people who identify as neither male nor female or ask not to be referred to as he, she, him or her.

“People have long thought that gender is a binary — that a person is either a man or a woman — when in reality gender is a spectrum,” said trans activist and consultant Jacob Nash, a panelist on gender at the 2017 PRSA Health Academy Conference in April and at the PRSA 2016 International Conference in Indianapolis.

Nash said that some transgender individuals (who do not identify with the biological sex they were assigned at birth) eschew the gender binary altogether and refer to themselves as “gender-nonconforming,” meaning their gender expression differs from conventional expectations of masculinity and femininity.

“For all these persons, having a gender non-specific pronoun is important not only for spiritual and mental health, but in some cases for physical safety as well,” said Nash, founder of Margie’s Hope, an Akron, Ohio-based organization that helps transgender people.

The 2017 AP Stylebook has an entry on gender that includes descriptions such as “cisgender” (people whose gender identity matches their biological sex at birth) and “intersex” (people born with genitalia or chromosomes that don’t fit typical definitions for males or females). According to The AP Stylebook, “Gender refers to a person’s social identity while sex refers to biological characteristics. Not all people fall under one of two categories for sex or gender, according to leading medical organizations.” The Stylebook advises writers to “avoid references to both, either or opposite sexes or genders as a way to encompass all people.”

“We offer the new advice for two reasons,” said AP Stylebook editor Paula Froke. [As] recognition that spoken language uses ‘they’ as a singular, and [because] we also recognize the need for a pronoun for people who don’t identify as a he or a she.”

According to a first-of-its-kind Harris Poll conducted for GLAAD (formerly the Gay & Lesbian Alliance Against Defamation), a media-monitoring organization, “Young people today are more accepting of LGBTQ people than ever before. And as acceptance has grown in this country, so too has the number of young people who describe themselves as LGBTQ.”

According to the survey, 63 percent of cisgender, heterosexual millennials consider themselves allies of LGBTQ (Lesbian, Gay, Bisexual, Transgender, Queer or Questioning) people, and another 23 percent describe themselves as “detached supporters.” Of millennials surveyed, 20 percent identify themselves as LGBTQ and 12 percent of those say they are not cisgender. Regardless of why young people report higher numbers of gender nonconformity, the need for a singular, non-gender-specific pronoun is clear.

Although people often use “they,” “them,” or “their” as singular pronouns when speaking, writing still tends to treat these words as plural. AP now suggests using a person’s name in place of a pronoun or rewording sentences to avoid pronoun use altogether.

Singular use of “they” still takes a plural verb, which I find easier on the ear, as in “they walk” (as opposed to “they walks”). For me, using “they,” “them” and “theirs” as singular pronouns sounds better than other gender-neutral alternatives that have been proposed, such as “xe, xem, xyrs” or “ze, hir, hirs.” In my opinion, “they,” “them” and “theirs” as singular pronouns will become more commonplace over time, so that eventually writers will no longer have to explain that the person being referred to prefers a gender-neutral pronoun, as AP currently suggests.

Froke said the 2016 Stylebook team had considered making the pronoun change, but because alternative proposals for gender-neutral pronouns existed, they felt more time was needed.

“This year’s team resumed the discussions at the outset of our work,” she said. “Over several months we crafted language intended to address the need for these usages in some cases while being mindful of the need for clarity for all readers.”

As someone who champions writing and speaking for LGBTQ inclusion, I applaud AP for its forward momentum. Writers can also look to the free, online “GLAAD Media Reference Guide,” which provides more extensive guidance on covering the transgender and gender-nonconforming community. It also includes a comprehensive glossary of terms.

“GLAAD has championed the use of LGBTQ-supportive language in media since our founding in 1985, and we welcome The AP Stylebook including new rules for citing gender that are in accord with those we have long advocated,” said Rich Ferraro, GLAAD’s chief communications officer.

Jaron Terry, MS, APR, Fellow PRSA, is president of Jaron Terry Communications, Ltd. She teaches crisis communications at Franklin University, serves on the volunteer board of PFLAG Columbus (Ohio) and is a member of the national-level PRSA Diversity & Inclusion committee. She is past president of the Central Ohio Chapter and provides strategic consulting as well as writing services. Find her at JaronTerryCommunications.com or jaronterry@columbus.rr.com @JaronTerry