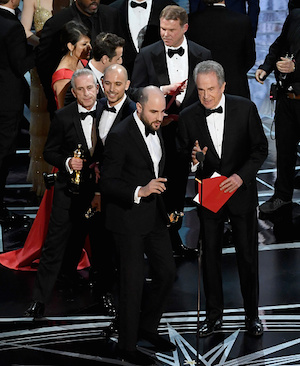 Presenters sometimes make mistakes at awards shows, but this year’s Best Picture mix up at the Oscars on Feb. 26 was unforgettable. I barely remember the three hours of entertainment that preceded Warren Beatty and Faye Dunaway incorrectly giving the trophy to La La Land instead of actual winner Moonlight.

I watched interviews after the show to hear more about the mistake, and to my amazement, there weren’t any concrete answers — just confusion and several conspiracy theories. A rep for Oscar vote-counters PricewaterhouseCoopers (PwC) apparently gave Beatty the Best Actress card, which had winner Emma Stone’s printed name on it. But Stone said she kept her card. How could everyone let this happen?

I woke up the next day hoping for an explanation, yet it took until the afternoon for PwC to acknowledge the mistake and declare an investigation. Then, they released a second statement taking full ownership.

In an article published on March 1, PwC’s Brian Cullinan and Martha Ruiz admitted to The Hollywood Reporter that the company didn’t have a concrete procedure in case the wrong winner card ended up in a presenter’s hands. The protocol was just to stop the snowball effect, whether that meant walking onstage or signaling to the stage manager.

In other words: saving the Oscars is a spur-of-the-moment operation for PwC and the Academy, and the event badly needs a crisis playbook. Here’s how they should start:

Scott Pansky is co-founder/partner of Allison + Partners in Los Angeles. He also serves as an executive committee member of PRSA’s Entertainment and Sports Professional Interest Section.