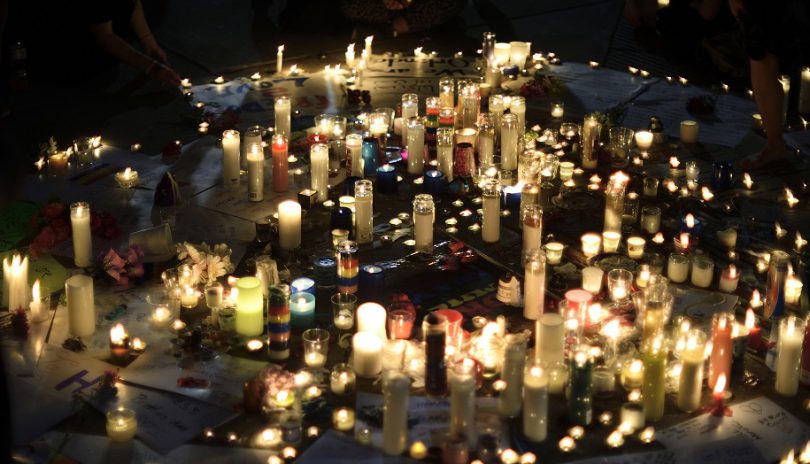 I don’t think I’ll ever forget where I was or when I heard about the Pulse nightclub shooting. Living less than a mile from where a talented singer from The Voice had been shot and killed less than 24 hours prior, I recall thinking it was a mistake when I scanned Facebook on my phone around 4 a.m. and saw rumblings of another shooting in Orlando.

Orlando. The City Beautiful. The city I’ve called home for more than 30 years. Things like this don’t happen in Orlando. Sure, sometimes passengers get sick on a nearby cruise ship. Or a theme park attraction needs to close for repairs for a few hours. But not mass shootings. Not THE largest mass shooting on U.S. soil. Not here.

As the morning of June 12 unfolded, I struggled with the decision – as a parent – to switch on the television. Ultimately, my public relations/”news junkie” persona won, and I did. In addition to the baffling number of casualties that awaited me there, I also saw something strangely comforting. Friends. Colleagues. Fellow PRSA members.

And that’s when the tragedy personally hit me. I cried not only for the victims, not only for their families, not only for my son who would have to re-live this someday when he reads about it in a history book, but also for my friends and colleagues who had the daunting task of communicating such heart-wrenching news to a variety of publics. PR professionals from the local hospital systems, spokespersons for local municipalities and emergency management agencies, representatives from the local blood bank, and PR representation of the nightclub, among others, stepped up to perform the critical function of communicating at a time of extreme uncertainty.

As the days and weeks unfolded, I couldn’t shake the feeling that I needed to personally do something. I visited the memorials. I donated money. I eventually drove by the site and mourned those who lost their lives there. But I still wanted to do something more. In discussing with the president of the local Florida Public Relations Association chapter, we decided that we could do something for our friends, and I set out to plan that special event.

On September 20, 2016, members of the local public relations community joined together to honor those communicators for all they did in the immediate aftermath of the Pulse nightclub shooting during an event entitled “Heroes Among Us.” Held exactly 100 days after the shooting, more than 80 local professionals met at Gator’s Dockside – SODO to honor and support those who did a tremendous job – often with very little sleep and putting their other responsibilities on hold – to keep the world informed after the deadliest mass shooting on U.S. soil. They helped tell the stories of the victims, the heroes and the impact on the community as a whole. The restaurant was specifically selected because it was impacted by the loss of traffic in the weeks following the shooting. Located less than one mile from the nightclub, roads were closed to the public for several weeks as the scene was investigated and processed.

Through sponsorships and attendance, the “Heroes Among Us” event raised $600.00, which was donated to the OneOrlando Fund. Sponsors covered the costs of all honored attendees. Event sponsors included Big Shoes South, Consensus Communications, the Florida Fruit & Vegetable Association, HuntonBrady Architects, Kissimmee Utility Authority, the North American Veterinary Community, On the Same Page LLC, and Reis Corporate Public Relations. In addition, Lee Forrest Design donated white roses for each of the heroes among us.

At the end of the day, it seems like such a small gesture, but I do think it was meaningful to those we honored. One of the honored guests – a Public Information Officer for a local government agency – pulled me aside at one point during the event to let me know it’s the first time he had been thanked for all he did in the aftermath of the shooting. Imagine that… the first time anyone had said ‘thank you’ to him. I hate that the shooting happened in Orlando, and I hate that my friends and colleagues had to respond on behalf of their organizations and agencies. But I love that these professionals stepped up without any hesitation, and I love the way that the PR community came together to show our support to those who were on the front lines. It’s just one more representation of what it means to be #OrlandoStrong.