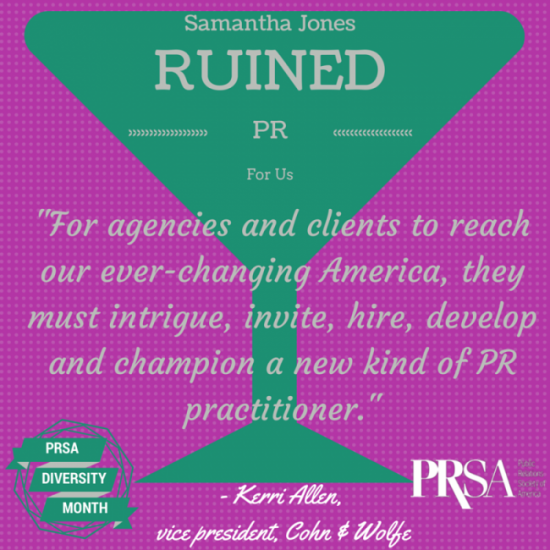 I have no scientific backing, but I suspect that the “Sex and the City” image of that popular Kim Cattrall character—a cosmopolitan, self-centered blonde—is still the pervasive stereotype of the public relations professional.

It might not be fair, but it’s not entirely inaccurate.  According to data from the U.S. Bureau of Labor Statistics and PRSA, public relations specialists are overwhelmingly white and female (84% and 73%, respectively). Most firms are located in trendy urban centers and our daily activity may seem frivolous and frothy: celebrity management, hobnobbing with magazine editors, and event planning. As to hair color—we don’t have the data for that.

But as the American public we serve becomes its most diverse in history, how do we break that stereotype and attract a new slate of smart young minds into the industry?

According to GlassDoor.com, a senior software engineer at Google earns $153,000 on average. Meanwhile, the average salary for an SVP at one global PR firm was listed 14% higher at $174,000. If it’s not the money—what’s the problem? Why aren’t more men, Hispanics, African Americans or Asian Americans drawn to or kept in this industry? I think the barriers include a lack of industry cachet, clear paths to and diverse cultural inclusiveness.

Insiders know it’s not all about high heels and happy hour, but the industry does not evoke the gravitas of medicine, engineering or even advertising. And it consistently fails to attract certain groups for that very reason.

Asian-Americans have the highest rates of educational achievement across any ethnic group in the U.S. and are “given three career choices from their parents,” as one South Asian PR professional told me. “You can be doctor, lawyer or engineer,” she deadpanned. “I’m not kidding.” Naturally, those are respected and lucrative careers that are projected to provide stability. If those are your goals, Samantha Jones is not your poster woman.

For the assistant account executives out there, it may feel like tedious twitter copywriting will never end. It does. And a senior-level PR role can evolve to becoming client counsel to a Fortune 500 client, a market strategist gleaning insights from cutting-edge data analytics, or a content creator at the level of any major publisher. But that ascend isn’t created equal according to the numbers.

In this overwhelmingly female industry, more men rise to managerial positions. (We fill the cubes, but not the corner offices.) For African American practitioners, something derails on the ascent up the ladder. According to the Bureau of Labor Statistics[1], as PR professionals rise in the ranks from specialist to management, African American representation drops by 50 percent. Cross-cultural mentoring is vital to make a path towards upward mobility inclusive and achievable.

I’ve worked in multicultural communications for nearly 15 years and my personal experience has found that there’s a thin line between an unwitting privilege of place (never thinking twice about belonging in a chic agency environment of mostly white women) and pretending that you fit in just fine.

I manage a team of professionals from many backgrounds—foreign-born, first-generation, bilingual, bicultural—and I hope they feel fully “seen” and understood. Beyond traditional lures of any career like salary and stability, the little things add up. It matters if no one at your agency listens to the music you do. It feels isolating to be the only person with an accent, speaking in your second language all day. Why choose a career—your day-to-daylife—where pop culture says you’ll be the outsider?

Ethnic PR shops are populated with people of the communities they serve, and larger “general market” firms rarely reflect the working population in the U.S. Having been the director of PR at a certified minority-owned Hispanic agency, I’d venture that niche shops offer the comfort of known culture and shared experience. The catch is that they can lack opportunities that multinational firms offer and even hinder the career trajectory young professionals. So it’s a double-bind.

For agencies and clients to reach our ever-changing America, they must intrigue, invite, hire, develop and champion a new kind of PR practitioner. And she might be a very different Ms. Jones.

Kerri Allen is vice president at Cohn & Wolfe, where she leads the INFUSE cross-cultural division. She is past chair of PRSA’s Multicultural Communications Section and VP of the Hispanic Public Relations Association-New York. Kerri serves on the selection committee for The LAGRANT Foundation’s scholarship program, supporting ethnic minority undergraduate and graduate students pursuing careers in public relations, marketing or advertising. Follow Kerri on Twitter @Kerrita.