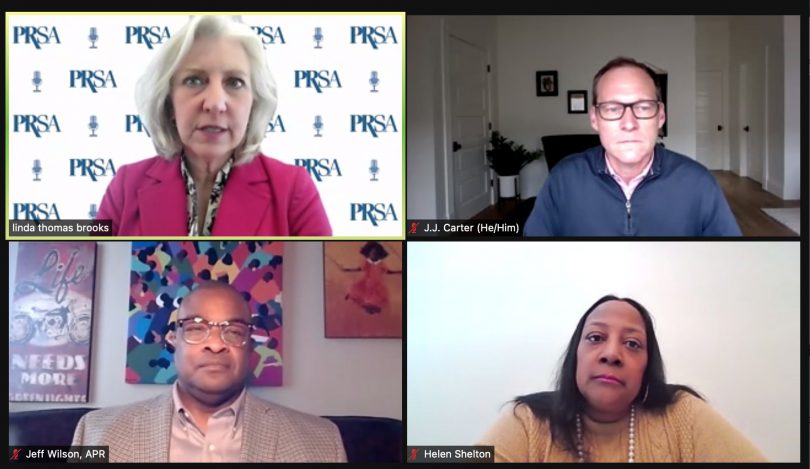 According to the U.S. Bureau of Labor Statistics, as of 2018 (the most recent year for which data is available), the PR profession was 87.9 percent white, 8.3 percent African American, 5.7 percent Hispanic and 2.6 percent Asian. (By comparison, the overall U.S. population is 76.3 white, 18.5 percent Hispanic, 13.4 percent Black or African American, and 5.9 percent Asian, according to the U.S. Census Bureau.)

“We all recognize the need to continuously improve DE&I representation” in all professions, said PRSA CEO Linda Thomas Brooks, who moderated an Oct. 20 ICON 2021 panel titled “The State of Diversity, Equity and Inclusion in PR and Communications.

“But how can we help diversify the talent pipeline and bring more people into this industry? How can PR agencies and organizations improve those metrics?” she asked.

“No amount of diversity-speak is going to impact change,” she said. “People pat themselves on the back because they can point to numbers,” but DE&I “is not a numbers game,” she said. While numbers matter (FINN’s goal is to exceed 30 percent ethnic diversity in its ranks by 2023), “I want to see some more action,” she said. The industry needs to “go out there and recruit” and to “create environments that are inclusive.”

To attract and mentor diverse talent to the communications field, “the white man that’s in charge of everything needs to be a part of it,” Shelton said. “But the reality is that we all have the power and the capacity, regardless of our backgrounds, to make a difference and drive DE&I in our industry.”

Such goals will only be achieved “when we address the underlying and systemic challenges that make [the PR profession] a less hospitable place for talent of color to be their best selves at work,” said panelist J.J. Carter, chief operating officer and U.S. president of the Americas for FleishmanHillard International Communications in San Francisco.

“We need to be able to improve the composition of the workforce for the industry at large,” he said. “It takes a sustained commitment and an openness for agency leaders at all levels.”

To that end, Carter said, organizations must overcome their “institutional narcissism and thinking we have all the right answers,” he said. “Are we being as inclusive in consideration of hiring and promotions and performance as we should be?”

Making the profession more diverse requires a change in mindset among people who screen and hire job applicants, said Jeff Wilson, APR, Richmond, Va.-based vice president of workplace culture at Padilla and a PRSA Board member.

However, “If you bring in diverse talent, but you’re not able to keep them because they do not have that sense of belonging, you’re going to be in a vicious cycle,” he said. He said that Padilla trains its hiring managers and staff to create a more inclusive work environment and audits its contractors and vendors for diversity.

Carter said FleishmanHillard is prioritizing diverse talent in its hiring processes, with such candidates representing 40 percent of its new hires in the first half of 2021. The company has set aggressive diverse-hiring targets for 2022 and beyond, knowing those goals might not be met. The firm decided it would still achieve better outcomes by setting goals that are just out of reach “because it would focus the organization’s energy on that action.” Company leaders are evaluated on the progress they make toward the firm’s diversity goals, he said.

“We are probing for inclusivity attributes with candidates who are diverse and not diverse,” Carter said. In addition, the company tries “to be proactive in staffing our accounts with truly inclusive teams” and to be “open and honest where we lack the ability to do that.”

Shelton said FINN has a program to educate and recruit young, diverse talent through student scholarships and internships. She said that every student who has completed the program has then gone on to work at the firm. “But once you have them in the door, don’t let the ball drop. Create opportunities for them to grow and feel welcome,” and give diverse employees “a platform where they can voice concerns or issues.”

Shelton said that FINN Partners has also formed hobby groups for its employees so that “people can come together based on the things they have in common.”