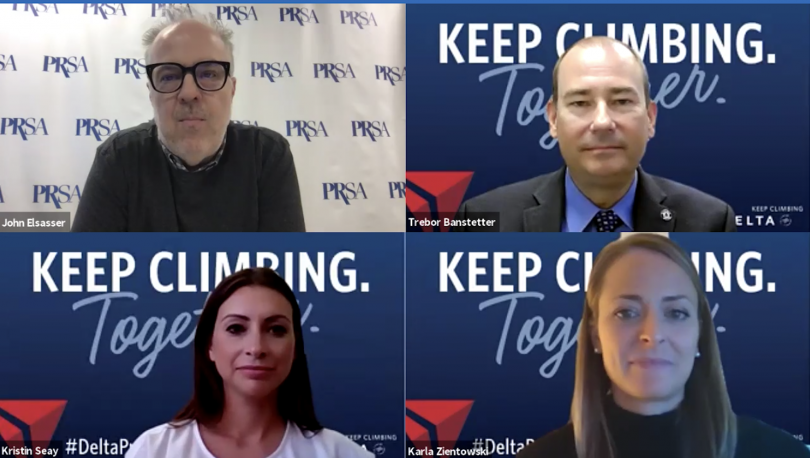 In February 2020, as the coronavirus raced toward pandemic proportions, Delta Air Lines made the difficult decision to suspend its flights to China, where the outbreak had originated. The company’s communications team found itself pivoting into crisis mode.

“Things began to continually get worse,” said Kristin Seay, Delta’s director of employee communications. As the virus spread around the world, “The information was coming so quickly and changing so quickly,” she said. “Our communications strategies and ways of working were based on whatever had happened the day before.”

Seay was one of three Delta panelists on PRSA’s Oct. 20 workshop, “Inside Delta’s First-Class Response to the Pandemic,” the last session ICON 2021.

When the World Health Organization declared COVID-19 a global pandemic in March 2020 and the United States suspended air travel from Europe, “that was the tipping point,” said panelist Karla Zientowski, Delta’s director of customer experience and regional marketing. “People were starting to panic about their travel plans and were seeking reassurance.”

“This was a scenario that was unimaginable,” said panelist Trebor Banstetter, director of corporate communications for Atlanta-based Delta Air Lines. “I don’t know how many companies will actively plan for an event that will take their revenues down by 95 percent within a two-week period, which is what happened to Delta,” he said. “We were making up the playbook at the time. It was new territory, not only for comms but across our entire industry.”

Even as Delta’s communications people adapted to rapidly changing information, they also had to determine which of their existing messages no longer applied and would have to come down. To perform both of those tasks simultaneously, “collaboration between the teams was 24/7,” Zientowski said.

They produced videos for customers that explained Delta’s longstanding health measures and new protocols to clean its airplanes that had been implemented since the outbreak began. Visuals were the best way to explain those abstract concepts, Zientowski said.

Videos that the company created about its enhanced cleaning practices led to media coverage as Delta shared that content outside the company, Banstetter said.

“There were very few communications items that we produced that did not have an internal component as well as an external,” Shea said. “All of this information was just as relevant to one audience as it was to the other.”

Delta’s communicators also had to reach employees who don’t work in front of computer screens. “We hosted 43 town halls between March 2020 and the end of the year,” Shea said. Company leaders, including Delta CEO Ed Bastian, took part in those events and provided weekly updates.

Because information about the virus was constantly evolving, the team pumped out frequent updates. Internal communications had to be vetted swiftly, since those messages could end up in news headlines and affect stock prices, among other consequences.

Communications were written, approved and issued within a matter of hours — “a faster pace than we were used to,” especially as employees worked remotely, Banstetter said. But throughout the pandemic, he said, the airline got its messages across to key audiences of customers, employees and the public at large by erring “on the side of over-communicating rather than under-communicating.”