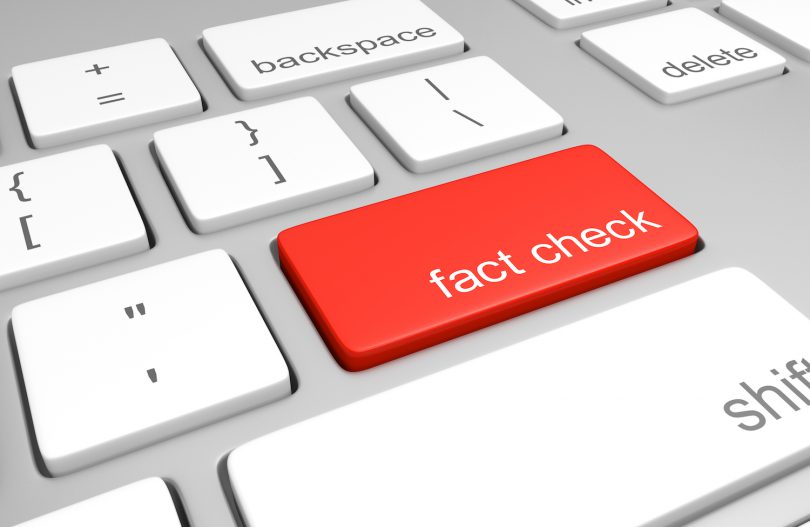 After her keynote speech at PRSA’s ICON 2020 virtual conference today, author Nina Jankowicz, disinformation fellow at the Wilson Center in Washington, D.C., moderated a panel discussion on how communicators can help counter misinformation and disinformation.

Joining her were Marianna Spring, a reporter who covers disinformation and social media for BBC News in London; Neil Brown, president of the Poynter Institute for Media Studies in St. Petersburg, Fla.; and Dr. Sander van der Linden, associate professor of social psychology at the University of Cambridge, England, and director of its Social Decision-Making Lab. What follows are edited highlights from the panel: 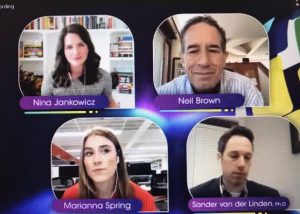 What are the limits of fact-checking?

Neil Brown: [The Poynter Institute is] the home of PolitiFact, the largest political fact-checking website in the country, and the International Fact-Checking Network, which supports fact-checkers around the globe. What we’re trying to do, from the standpoint of good old-fashioned journalism, is to report on what’s true, what’s not true, and to be a check on speech [and] manipulation. We believe in attacking at a local level, one story, one individual audience member at a time. It may seem like an uphill climb, but we’re optimistic.

Fact-checking has exploded over the last decade, and in the last four to six years. PolitiFact’s traffic and number of fact-checks rises enormously every year. The International Fact-Checking Network has created a code of principles for fact-checking. And we’ve gone from 22 fact-checking organizations around the globe to 86 in more than 50 countries in the last four years alone.

[In the future], I think we will have to directly engage consumers in this fight, [so they will] be smarter and understand that they have some obligation to do a little work — to empower them to not suffer under this deluge of misinformation. Through media-literacy programs, which started in middle and high schools to arm students to be better consumers of information and are now expanding to college campuses through Poynter, as well as to seniors, 50 and older, [we are] asking folks to understand what they’re up against and to not necessarily believe everything they hear or see on their phones.

Dr. van der Linden, can you talk about your idea of “vaccinating” people against disinformation?

Sander van der Linden: The idea is that prevention is better than a cure, or what we call “preemptively debunking” or “pre-bunking.” What we know about the human brain and how memories work is that, once someone has been exposed to a falsehood or a myth, it’s very difficult to correct it because people continue to retrieve incorrect information from their memories. The idea of “pre-bunking” is that we try to preemptively give people the tools they need to spot manipulation techniques in media and to be relatively immune to fake news. We’re finding that, once people understand the technique, they’re more likely to resist [media manipulation and fake news].

Marianna, as a reporter, how do you decide what disinformation stories are worth covering?

Marianna Spring: There is a lot of disinformation that we could tackle all the time. Unfortunately, I’m only one human being. But I try to humanize the impact of misinformation, [which] is the best way of reaching audiences and helping them understand the danger that online disinformation poses. There’s such an appetite from people to hear about disinformation. They want to understand it, to know how it affects their lives and why it’s important.

How can PR professionals incorporate “pre-bunking” into their own work?

Sander van der Linden: The key ingredient is to preemptively vaccinate people against falsehoods or train [them] on how to recognize disinformation. For example, with WhatsApp, we tried to find out what [kinds of disinformation] techniques are prevalent there. The ones we distilled included the use of fake experts — a lot of health misinformation is on WhatsApp — but also something we termed “escalation,” which is the forwarding of what seem to be urgent events.

We then try to tailor interventions and tools to help people recognize those situations in advance. Any professional communicator can figure out how to best implement this technique within their own sphere. The idea is to not only debunk, but also to prepare your audience to recognize impending misinformation.