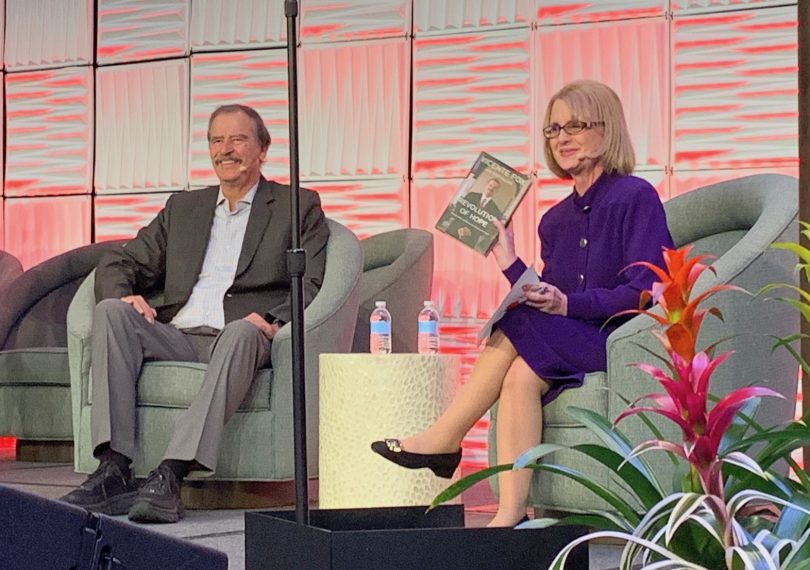 Fox’s grandfather, Joseph L. Fox, was born and raised in the Ohio city where he worked as a butcher’s assistant. But when the job became too violent for him — Fox’s grandfather was traumatized by the sound of squealing hogs — he decided to move south to Mexico in the hopes of starting a new, better life.

Fox’s grandfather’s resilience and bravery made a lasting impact, teaching the aspiring politician and businessman that every individual has the capacity to change their situation in life — as long as they’re driven by a strong sense of purpose.

“When you discover the leadership that you have within, you can do so many things,” said Fox, who was interviewed by Conference Chair Rhoda Weiss, APR, Fellow PRSA, at today’s General Session at the PRSA 2019 International Conference in San Diego. “We are all leaders, each and every one of us.”

Fox first discovered his sense of purpose while at Coca-Cola.

He started working at the company in 1964 as a truck driver and salesperson, delivering soda to mom-and-pop stores across Mexico. However, he didn’t think that the job properly utilized his talents and capabilities. He wanted to make a difference on a more corporate level, and by 1975, just nine years later, he became CEO of Coca-Cola Mexico.

As president of Mexico from 2000 to 2006, Fox made industrialization and global trade top priorities.

During his interview, he touted the fact that Mexico is now the “most competitive manufacturing place in the world,” housing top-producing automobile plants from companies such as GM, Ford and Mazda. He also talked about his strong relationships and collaborations with other leaders from that time — including former President George W. Bush.

But for Fox, making globalization a political focus wasn’t just about opening up Mexico to foreign business. It was also about diplomacy and kindness. Supporting the hard work and industrial efforts of your neighbors and allies, said Fox, is a potent way to fight isolation and nationalism.

“You gain the capacity to lead by love, by democratic dialogue,” he said.

Though Fox left the presidency in late 2006, he remains committed to the causes that defined his time in office.

When Fox speaks with these young, aspiring leaders, he makes sure to imbue them with the same sense of hope and self-determination that has been part of the Fox family for generations.

“In school, they tell you leaders are a select class, a few people,” said Fox. “But it’s not true. We are all leaders.”