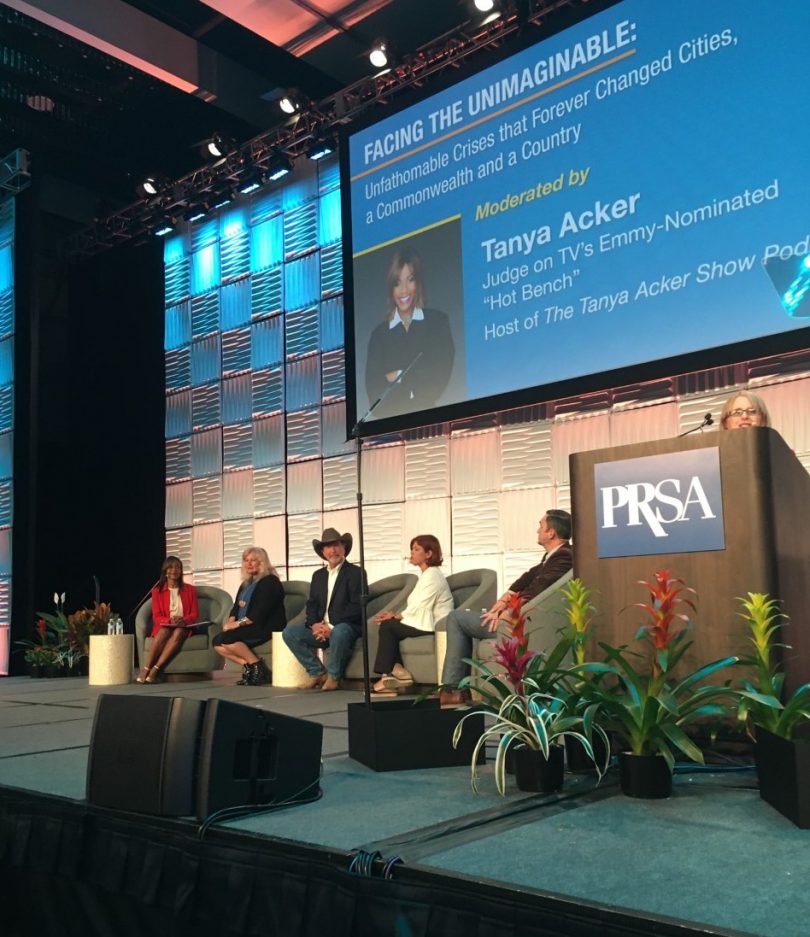 “Before dispelling a myth about a tragedy, you have to first understand how it affects you, and what it means to be in the middle of a tragedy while you’re living through it,” said Tanya Acker, judge on the Emmy-nominated TV show “Hot Bench” and host of “The Tanya Acker Show” podcast.

“There’s a real ripple effect in communications and how you tell a story,” said Acker, who moderated the crisis keynote panel on Sunday afternoon at the PRSA 2019 International Conference in San Diego.

The panelists all stressed the idea of remaining honest and transparent, while also maintaining hope and optimism. They agreed that communicators need to remain relevant and break through to the public in this era of the 24/7 news cycle; and calling a crisis what it is better empowers people to respond to it and heal from it.

Here are some highlights and takeaways from their conversation:

Fiona Cassidy, APR, spoke about the two consecutive shooting attacks at mosques in Christchurch, New Zealand, when a terrorist act killed 51 people and injured 49 people during Friday prayer in March of this year.

She mentioned the hashtag campaign #theyareus that helped tell the story, as there was an effort to talk about, and center on, the people, rather than the act of hate.

“Communities were at the center of everything we did,” she said. “And there continue to be activities that are human-based and community-based.”

Cassidy said it’s important to “empower the people to get back to being people to help make us — and the country of New Zealand — better and stronger.”

“When communicating a narrative of a hate-based incident during a crisis, you tell the story of the people, not of the incident,” she said. “It’s not just a story — there are real people at the end of the story. Be kind and be authentic.”

Steve Vaus discussed the events following the tragedy of the synagogue shooting in Poway, Calif., this past April, when a man opened fire on the last day of Passover, on the Sabbath, inside a house of worship.

Vaus said that someone asked him if it was a hate crime, and he said yes. “I felt that it was important to do that: Call it what it is,” he said. “The key in our situation was being honest.”

He received calls from around the world with people asking what happened. “People need to know when to stop talking to the media,” he said. “They were trying to create a political narrative, not trying to find out what was best for Poway.”

But then you move on from that, he said. “You can’t control when hate crosses your threshold but you can control how you respond to it. Once you know what you’re dealing with it, you can better deal with it.”

Vaus gave out his cellphone number to the public and told people to call him with any concerns or questions.

“Be accessible to your people because there’s going to be a time when you have to be their rock,” he said. “Keep it real and commit to using words that unite and lift people.”

Raquel del Carmen Rivera Torres, APR, weighed in on the devastation of Puerto Rico in the aftermath of Hurricane Maria in September 2017 when it made landfall as a Category 5 hurricane.

“We needed as much data as we can so we can craft the right message,” she said. “We also need to tell the truth so we can heal.”

As all the communities were in the same circumstances, they had to put together solutions, Torres said. “We had to make sure we were prepared as much as we could.”

The important things to remember, she said, are sharing the truth and sharing opportunities. “We are in this together. And there is power in community and there are alliances to form,” Torres said. “We were not only saying what we needed to say, but also saying what they needed to hear.”

In Puerto Rico, 100 percent of the residents were without power after the hurricane, she noted. Being able to communicate with the public was difficult, and managing the new normal was difficult. “In our case, we had to make it political, because we needed funding from the government,” she said. “They took fear from us, so we are fearless.”

“Never underestimate the power of people and what communities that are united can do,” she said. “Put people first. We’re focused on making relationships mutually beneficial.”

Matt Plotkin spoke about the recovery process following the Camp Fire in Butte County, Calif., the most destructive and deadliest wildfire in California history. The entire community of Paradise was devastated in the fall of 2018.

“It’s innate in people to want to come back,” he said, adding that some have already secured permits to rebuild. “They knew that no matter the circumstances, they were planning to return.”

Plotkin spoke of having optimism and hope in the face of adversity. “People want to grab onto the little puzzle pieces of hope that they will build together — and start sharing that story, attaching their word or home to that.”

Have volunteers come in in a way that is smart and strategic, he said.

“There has to be a rallying cry — home in on this, get out of the initial response of the crisis and find glimmers of hope for the future,” Plotkin said. “It gets your people through that crisis and you start to develop more of that hope and glimpse of a positive future.”

He noted the importance of finding resilience and sustainability when you’re in the middle of a crisis of any magnitude.

“It comes down to how you take care of yourself and those around you,” Plotkin said. Figure out a way to sustain the work you’re doing.

“In these crisis situations, we sometimes have 18-to-24-hour days and minimal sleep, with lots of people asking us questions — focus on finding those nook-and-cranny moments to catch a breath, those sustainable moments.”