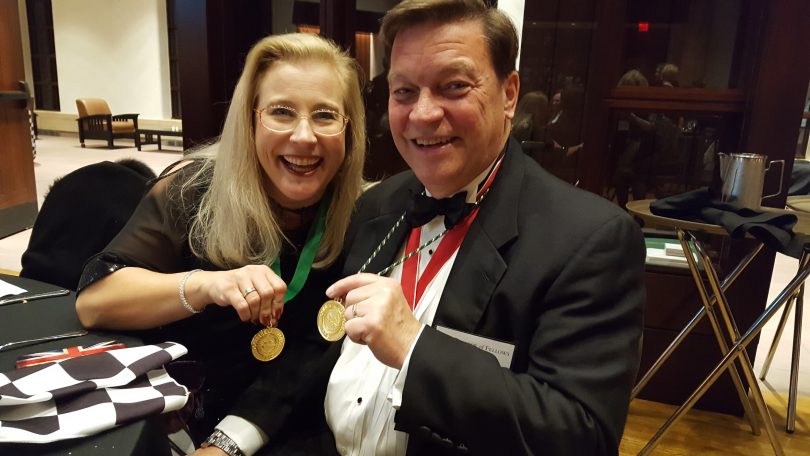 Byrum served as PRSA’s president and CEO in 2003.

A distinguished corporate executive, Byrum traveled throughout the country living and working in California, Texas, Washington, D.C., and South Carolina before settling in Lewisburg, Pa., with his wife, Kristie Byrum, APR, Fellow PRSA (pictured above), an associate professor at Bloomsburg University of Pennsylvania, and children, James Byrum, Caroline Bohm, and Bradley Bohm.

He began his career with the Gannett Co., Inc., before serving in progressively advanced roles at four Silicon Valley companies. He then moved to Texas, where he held corporate leadership roles for EDS Corp. in Plano and Trilogy in Austin.

Skilled in mergers and acquisitions, Byrum counseled companies on financial structures and market positioning. A former journalist and editor, he worked for numerous newspapers and a wire service, earning numerous accolades and journalism awards.

Together with Kristie Byrum, he co-founded the Byrum Innovation Group in Greenville, S.C., counseling high-tech companies and financial institutions.

After arriving in Lewisburg, Byrum brought his nationally recognized talents to the local economy and worked as a business advisor at the Small Business Development Center at Bucknell University, counseling local businesses and helping area entrepreneurs achieve their dreams.

Throughout his life, Byrum generously gave back to his profession. Aside from his role as PRSA’s president and CEO, he served as president of PRSA’s South Carolina and Silicon Valley chapters, and was the founding board member of the West Coast Strategic Communications Institute.

Byrum also served as guest lecturer at more than 40 universities, and was an adjunct professor at the University of Texas. He delivered the keynote addresses at the prestigious Donald W. Davis Symposium on Ethics at  Pennsylvania State University, and at Washington and Lee University’s Institute on Media Ethics.

He grew up in Wheeling, W.V., and earned a Bachelor of Arts in History at Washington and Lee University.

Relatives and friends are invited to attend a celebration of life on Oct. 26 at 11 a.m. in Rooke Chapel, Bucknell University, Lewisburg, Pa.