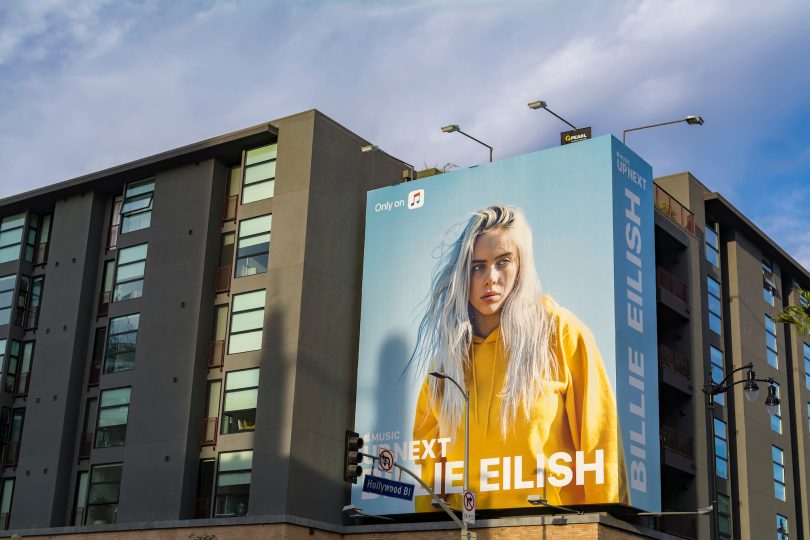 Billie Eilish, a 17-year-old pop singer, managed to earn a No.1 slot on the Billboard album chart for her debut record “When We All Fall Asleep, Where Do We Go?” without any radio hits by doing individual promotional campaigns with top steaming services.

For example, Spotify users had exclusive access to a version of her album supplemented with visuals and videos interspersed among the songs, while Amazon curated a video in which Eilish picked out items for purchase to pair with each of her songs.

Writes The Wall Street Journal’s Anne Steele, “For Ms. Eilish’s album, Interscope enlisted every major streaming service as an ally, doling out secondary promotional content that each could claim as ‘exclusive.’”

In addition to these individual campaigns with streaming services, Eilish and Interscope chose to release her debut record’s songs one-by-one, eschewing the usual pre-album cycle of dropping a single, sharing an accompanying music video and hoping the excitement translates into record sales.

This strategy gave listeners ample time with Eilish’s songs, creating a slow-building but lasting interest in her work that carried through to the album’s full release.

“With radio, things go and then they get pulled and it’s on to the next single and an artist’s shelf-life gets cut down,” her manager Danny Rukasin told the Journal. “With Billie this is a much longer-term project and radio’s not going to make or break her long-term career.”

Even if you can’t work directly with Spotify or Amazon, though, there are still ways of getting heard. In the case of Lil Nas X, the 19-year-old rapper behind recent crossover hit “Old Town Road,” a No.1 single and a collaboration with Billy Ray Cyrus came to fruition when he uploaded his song to the Vine-like app TikTok.

Whereas only a handful of artists find their way onto a record label roster or radio station song rotation, TikTok offered Lil Nas X an accessible platform to get his music heard. But it wasn’t the only reason “Old Town Road” became an unlikely hit.

In an article for The Verge, writer Julia Alexander says that Lil Nas X found an audience because his song touches on certain, of-the-moment internet infatuations, such as cowboy culture.

She writes, “[The] song, released in December 2018, arrived at the perfect time. A cowboy resurgence was happening online — Red Dead Redemption 2 was still one of the most popular games, and cowboy culture was popular among the hiphop community. This moment in time was referred to as the ‘Yee Haw Agenda’ and, by February 2019, it became a popular trending hashtag on TikTok.”

Alexander stops shorting of attributing all of Lil Nas X’s fame to his savvy social media skills and knowledge of online trends. However, there is a clear lesson in the phenomenon of “Old Town Road”: If you market something via the right channels at the right time, then anything can happen.

“The success of ‘Old Town Road’ proves that TikTok isn’t just a place for lip syncing or choreographed dances; it’s a new platform for a song to find an audience,” she writes. “Internet savvy artists like [Lil Nas X] know that. He’s a savant, who used a song with a catchy hook that could be used as snippet to garner attention it wouldn’t find anywhere else.”

This is an expanded version of a piece that first appeared in May 2019’s Strategies & Tactics.