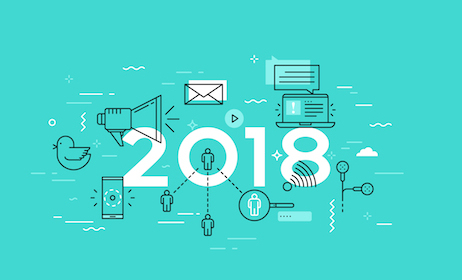 Throughout January, PRsay will feature posts by a variety of thought leaders on the year ahead for communicators and the PR profession.

For much of the past decade, authors of articles such as this one predicted changes in how content would be created and disseminated given the continued emergence of social and other digital-media platforms. We’ve watched traditional media such as newspapers, magazines, radio and television decrease in importance thanks to Twitter, Facebook, Snapchat and other social platforms.

In 2018, discussions about the future for PR and communications pros will likely include the topic of robots. Such conversations emphasize and express concern about AI (artificial intelligence), AR (augmented reality) and ephemeral content (e.g., the blink-and-you-miss-it nature of Snapchat). Tech companies have made huge financial bets on all of these innovations.

However, Sean Czarnecki of PRWeek wrote in October that most reactions to AI fall at the polar extremes of “a tesseract of manifold wonder, or a black box of dread.” Whether the effect is positive or negative, AI will likely impact PR and communications. Artificial intelligence also has the potential to revolutionize journalism.

The magic of AI will not be the only major change affecting the PR profession. Digital storytelling, social listening and native advertising will all dramatically increase in significance as well, even as blogs maintain an important role in disseminating information.

The knowledge, skills and abilities of the brightest and best PR people will continue to evolve. Writing and presentation development will still be strongly emphasized, but successful PR practitioners of the future must also be adept at business, content creation, environmental scanning, managing people, ethics, purpose-driven corporate social responsibility, stakeholder engagement and interpreting data and analytics.

Social media will continue to create opportunities for dialogue between brands and consumers, making public relations much more valuable than when it was stuck with press agents and publicists in the dark ages of one-way communication. This digital dialogue will also give more PR and communications pros seats and influence at the decision-making table. Despite these new opportunities, however, only about half of chief communications officers will report directly to CEOs — a figure that unfortunately is not expected to change much in the immediate future.

Tools to measure and evaluate public relations might continue their march away from simplistic and output-based methods toward more valuable outcome-based measures. The most successful PR people will monitor communication results in real time and revise messages when necessary. Knowing how to work with big data will also become more important for PR pros. New ways to measure the combined impact of public relations and marketing will likely emerge. Look for more PR shops to say they’re “data driven.”

Diversity and inclusion will continue to be important in the PR profession, but the current emphasis on gender and race will slowly branch out to include sexuality, age, geography — and given the realities of the global economy, possibly even national origin and political thought.

The ability to speak other languages in addition to English will continue to increase in value. Also expect a greater emphasis on influencers and micro-influencers in the effort to make messages appear more valid and authentic. Also watch for a greater use of social media news releases (SMNRs), which will still largely be directed at opinion leaders and other influencers rather than traditional news media outlets.

Every indication suggests the PR and communications function will become more aligned with marketing, making it crucial that PR practitioners know as much about the science and art of communication as our marketing colleagues do about their field.

Holding companies — especially WPP, Omnicom, Interpublic and Publicis — will continue to play important roles in the PR industry. Most expect these groups to still allow their participating PR firms to function somewhat independently, as long as profits continue to rise, if only minimally. Meanwhile, Edelman, the world’s most successful PR firm, continues to enjoy impressive growth and shows no indication that it intends to alter its independent status.

Look for these and other changes to become part of the PR and communications process during 2018 and beyond.