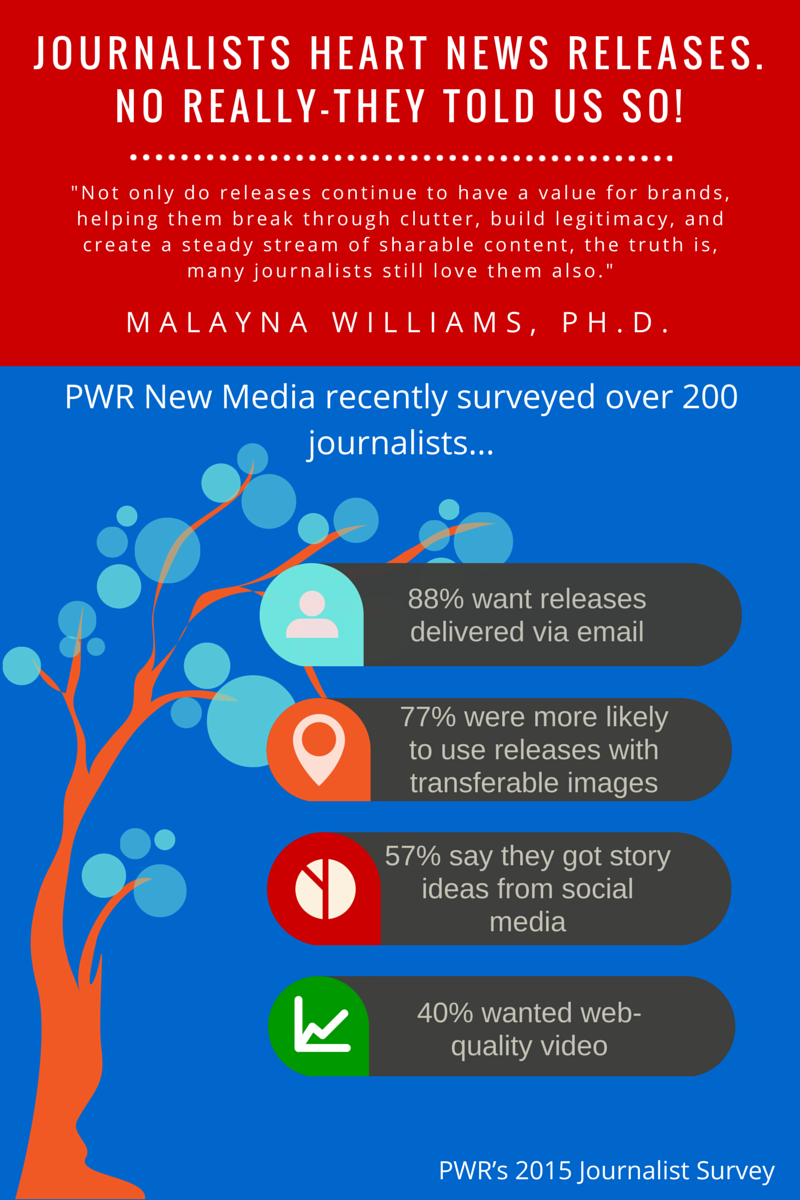 No Really—They Told Us So!

To borrow a well-known phrase (thanks Mr. Twain), the reports of News Releases’ death have been greatly exaggerated.  Not only do releases continue to have a value for brands, helping them break through clutter, build legitimacy, and create a steady stream of sharable content, the truth is, many journalists still love them also.

Here at PWR New Media, we recently surveyed over 200 journalists, asking them about their news release preferences. Not surprisingly, we found that journalists now have fewer resources but more responsibilities than ever before.  Sixty-eight percent of our participants reported that they’re responsible for creating online content in addition to their more traditional duties.  This means they need story ideas and digital content… constantly!

News Releases, done right, can be a terrific resource for journalists, making it easy for them to find new story ideas and giving them easy access to web-friendly content.

Did you catch that “done right”? I’ll confess: I have a strong opinion regarding exactly what that means. In today’s digital world, news releases should be loaded with easily transferable multi-media assets and be social-media friendly. And, they should reach journalists where they organize, archive and research story ideas: their own inboxes. Eighty-eight percent of journalists told us they want releases delivered via email. (Conversely, 5% said they want release via snail mail, 1% said via online newsrooms or RSS, and 0% said via wire service or social media.) And asked how they research stories, search (83%) and their own inboxes (70%) topped the list. (Social did well also, with 57% of journalists saying they’ve got story ideas from social media… just one more reason for brands to share releases on their social platforms.)

Images are a key asset. Not only did a vast majority (78%) of journalists tell us they want high-res images in their releases, 77% told us they were actually more likely to pick up a release and run with it if it included transferable images. (If you’re reading this and thinking about attaching big images to your next email, just stop. I can’t tell you how often—usually in our open-ended question about what they want PR professionals to know about their release preferences—we hear “no attachments.”)

Other web content is also useful for journalists. For example, infographics were cited as (very) important by 40% and links to relevant blog topics by 46%.

And, making them social-media friendly is also a must.  Forty-one percent of our respondents told us they want information on a brand’s social platforms so they can visit or follow and 26% said they want social media bookmarks so they can easily share and archive the release.

But here’s one final surprise about journalists: turns out, they’re people. Oh, you already knew that? Okay, but did you also know that people—a category which, as we’ve established, includes journalists—experience the world around them through their eyes above all and process visual information faster and better. What does this have to do with news releases? Traditionally nothing, but with the value of visual storytelling, news releases can truly benefit from a design overhaul. There is no reason to send an email that is not highly branded to convey the brand identity at a glance. (Why spend your brand’s money to send out a release branded with the sender’s logo and color scheme?) And with the amount of clutter in most inboxes, a good looking release can really stand out and grab attention.

So 680 words later, what’s my point? Sending well-targeted, highly-branded releases as HTML emails, loaded with the multi-media assets and social friendly functionality (tweetable quotes are our fav of the moment) not only elevates a brand, but can make journalists lives easier. And one thing I’ve learned having worked with PR folks for over ten years, is that good PR professionals heart  journalists.

Leave a Reply to Amy X