Although many of us had Monday off to celebrate Martin Luther King, Jr.’s life and inspiration, this week somehow felt like the longest one of the year so far. As they say “perception is reality” and the

reality is that this week has been a mixed bag for public relations professionals. Where many have settled comfortably into their 2015 routine, some are making the same old mistakes and others are already feeling the pain.

In this week’s Friday Five – PRSA’s  analysis of the week’s biggest public relations news and commentary – we take a look at the professions hits and misses. We provide another example of a brand failing to appropriately recognize a national holiday, see one more person directing their organization’s Twitter followers to graphic pornography, go back to Crisis Comms 101 and check in on the latest Uber issues. We also take a look at Dove’s newest inspirational film.

Like most people, many brands take national holidays as an opportunity to recognize the people being honored and the events being remembered. Unlike “Joe Public,” brands are usually seen as nameless, faceless, entities normally trying to sell you something. So it can be a little awkward (at best) when brands use their sales resources to project emotion and it can seem opportunistic (at best) or downright exploitive when done poorly.

This week the Seattle Seahawks were the latest to do it poorly with a tweet on the Martin Luther King, Jr.  holiday.

The reaction was less than positive and some Twitter users reminded us of what we already know; these things almost never work out well.

In the end, the organization issued the standard tweetpology.

We apologize for poor judgment shown in a tweet sent earlier. We did not intend to compare football to the civil rights legacy of Dr. King. 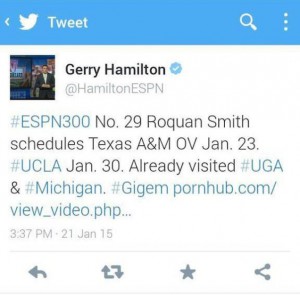 Hamilton has taken the interesting tactic of acting as if the tweet never happened. While he has continued to tweet since deleting the link, he has not addressed the mistake or made an apology.

Josh Kurp puts our thoughts to text in his UPROXX article:

“As someone who spends most of his day checking and double-checking hyperlinks, out of fear that I’ll accidentally link to something I didn’t mean to (I don’t need you guys to know that I’m an active commenter on the Work It! subreddit), I can sympathize with Gerry Hamilton.”

I concur; you can officially add this to my list of worst career fears.

While some may consider #DeflateGate overblown and others are piling on Tom Brady and the New England Patriots, there’s one aspect to the entire debacle that’s hard to challenge; this is a public relations crisis that has been fumbled.

“By going full on Lance Armstrong in his press conference, Bill Belichick has ensured that the crisis and news stories are distracting from the big game. Despite the crisis, the Patriots’ dynasty will go on and the corrosive brand damage will continue.”

Read his full opinion piece for his analysis of his issue and a reminder of the core tenets of effective crisis PR management.

Is it better to ask for permission or forgiveness? Uber, known for moving quickly into new markets before they’ve received the proper permission, may want to really consider that question. The company has consistently made headlines – often for the wrong reason. This week they can add another notch to the loss column as Seoul, South Korea considers a ban on the ride-hailing company for failing to “report its business and receive official permission before providing location tracking services on its ride-sharing application.”

As stated in the article by Rose Kim, “Uber’s services have also been suspended in countries from India to Germany, as well as in several U.S. states. Uber was banned in Spain last month, while the European Union’s top court denied non-traditional cabs the use of London bus lanes.” Although Uber has seen success in the markets where they do have permission to operate, we wonder how much more bad press they can overcome before their upward trend changes direction.

The silver lining on the week might have come from Dove. The company continues its winning strategy of promoting positive self-image and being happy with whom you are.

Dove’s newest project, spearheaded by Ogilvy & Mather, Paris, focuses on young girls and women and prompts them to love their curly hair.

Read Roo Ciambriello’s interview with Rob Candelino, vice president of marketing for haircare at Unilever (owner of the Dove brand) regarding why the company decided to tackle this particular subject.