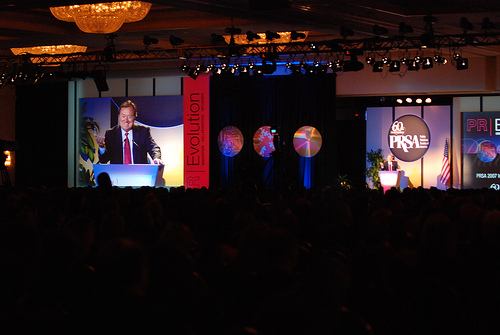 I posted a quick recap of Tim Russert’s General Session speech here at Tactics and The Strategist Online.
In addition to his discussion on the current state of politics in the United States, Russert shared several amusing anecdotes. He’s an entertaining speaker who knows how to deliver a punchline.
For instance, Russert recalled a time when he asked legendary newsman David Brinkley about the challenges of fitting everything going on in the world into a one-hour news show such as “Meet the Press.” Brinkley pointed out that an hour is an oasis because most interviews are three to four minutes fleeting by on cable or the Internet. “Take full advantage of that hour and understand the limits,” Brinkley told him. Russert said he asked him for an example. “If Moses came down from the mountaintop with the 10 Commandments,” Brinkley said, “how would television news cover that in 2007?”
“So tell me,” Russert said.
Said Brinkley: “Moses came down from the mountaintop today with the 10 Commandments, and here’s Sam Donaldson with the three most important.”
After the laughter from the audience subsided, Russert didn’t miss a beat: “I have a friend of mine who worked for President Clinton who said, “Which three?'”