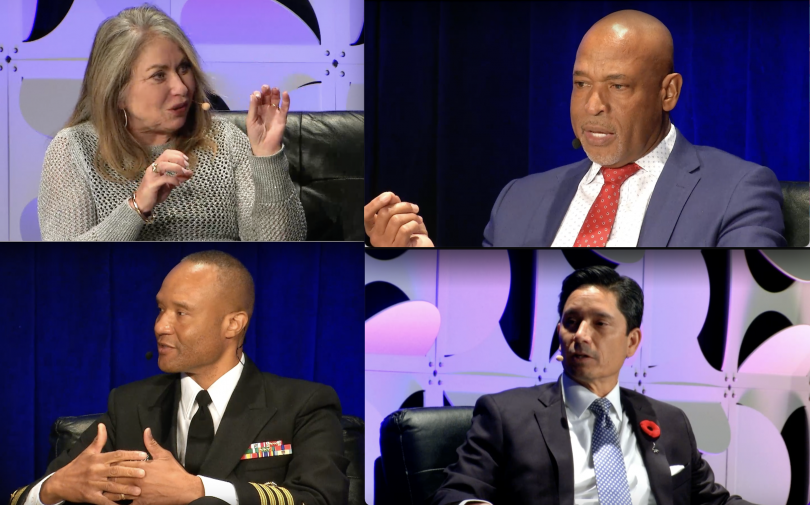 As a young man from the small Caribbean island of Saint Vincent who moved to the United States, Anselm A. Beach saw a TV commercial that inspired him to join the U.S. Army. He was drawn by the importance of defending the country, he said.

Beach was one of four participants in the Military and Veteran DE&I Keynote Panel, the closing General Session on Nov. 15 at PRSA’s ICON 2022 conference in Grapevine, Texas.

Panelist John Quintas’s father was born in the Philippines in November of 1941, a few weeks before Pearl Harbor and the Japanese invasion of the Philippines. His grandfather was killed during the war. His father came to the United States by joining the U.S. Coast Guard at 19 years old. John Quintas himself later became a Brigadier General with the U.S. Air Force (retired) and is now director of inclusive communities for Amazon.

Quintas’s father had instilled in John and his five siblings “a sense of gratitude for the opportunity that America gave to him.” Veterans exit the service with deep values, he said. “You live and breathe integrity first.”

Panelist Capt. Patrick Evans, APR, deputy chief of information for the United States Navy, said he had also felt a call a service. He left a career in radio and TV to help fight the war in Iraq.

Paula Pedene, APR, Fellow PRSA, owner of the consultancy Paula Pedene and Associates and executive director of the nonprofit Honoring America’s Veterans, moderated the panel. She asked how the U.S. military approaches diversity, equity and inclusion and about the importance of storytelling to communicate an organization’s messages.

Stories the Navy tells should convey that “Americans of all types and backgrounds will make us successful,” Evans said. But existing systems sometimes keep other people out, he said. “We need to bring in people from different backgrounds and embrace every opportunity to widen that pool.”

In the Army, “We need all these different types of people, doing different tasks to get the job done,” Beach said. At the same time, “Your life depends on the person next to you. You’ve got to be competent and part of a team.”

From ‘representation to full participation’

Beach said that DE&I is not a set thing, but “a framework by which we optimize talent and build teams.” It should help people move from “representation to full participation.”

Quintas said the value of diversity “doesn’t emerge unless you have an inclusive environment, where people can say, ‘This is where I belong; I feel valued.’” Leveraging peoples’ differences requires sharing perspectives, he said. “It’s about creating teams that look different and think different to drive innovation.”

But within diverse teams, “cohesion becomes that very important thing,” Beach said. Part of the storytelling challenge, Evans said, is that “it’s more about the organization than about individuals themselves. You have to tell stories about a culture of excellence, without stressing differences and making people uncomfortable.”