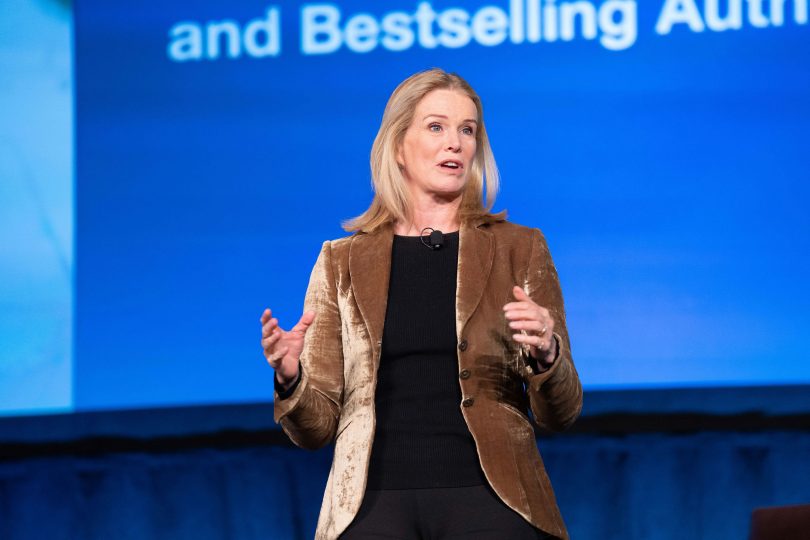 Katty Kay is an award-winning journalist who has reported on the biggest stories of the day from around the globe for the BBC.

She’s also — as she admitted during her ICON 2022 General Session today at the Gaylord Texan Resort & Convention Center in Grapevine, Texas — a work-in-progress regarding a subject of great interest to her: helping women turn thoughts into action and master a more confident mindset.

Kay, a regular contributor and substitute host of “Morning Joe” on MSNBC, recounted a recent email that she sent to Jamie, her editor in London. “It was about a show we planned to do, and I didn’t hear back. I thought, ‘That’s weird. He’s usually very responsive,’” she said.

By the following day, she thought he might be annoyed with her for working so much on a book assignment and not with BBC pieces. “Maybe the whole BBC in London is just mad at me,” Kay said. “Maybe they’re actually all sitting there mad at me. And then, by the next day, I still haven’t heard back, and I was thinking, ‘I better call my agent and see if I need to get a new job.’”

It turned out that Jamie was in India for work and out of contact for several days.

“It had nothing to do with me. You are not everybody else’s headline,” Kay said. “I mean, how often do you think about everybody else every day? So ruminate less; think less.”

That was one of her takeaways from her research on the frontiers of neuroscience as the co-author of four New York Times bestselling books about the importance of confidence for women and girls. With Claire Shipman, Kay wrote “Womenomics: Write Your Own Rules for Success,” “The Confidence Code: The Science and Art of Self-Assurance — What Women Should Know,” and “The Confidence Code for Girls: Taking Risks, Messing Up, & Becoming Your Amazingly Imperfect, Totally Powerful Self.”

Kay spent most of her thoughtful and entertaining 40-minute talk on confidence instead of reporting for the BBC, where she just covered the midterm elections. (“I think we all have to get used to not having an Election Night but having an Election Week in the United States,” she said regarding the delay in some of the close races.) She said she was taking a day off from politics, though she did offer her take on the role of journalists today.

The search for confidence

Kay and Shipman interviewed hundreds of business and military leaders, psychologists and neurologists to learn about confidence — what it is and how important is it to the work that we all do.

Cameron Anderson, a professor at the Walter A. Haas School of Business at the University of California, Berkeley, provided them with eye-opening student research: When it comes to success, confidence matters as much, if not more, than competence, he found. Hearing that deflated them.

“For us, the reason that we found that so depressing… particularly [for] a woman, is that the idea that competence isn’t the most important thing is kind of anathema,” Kay said. “We think if we color in the lines and dot every I and cross every T and play by the rules and keep our heads down, then someday, somebody will come along and tap us on the shoulder and give us the keys to the corner office.

“And we find that doesn’t happen,” she continued. “Perhaps it doesn’t happen because of this issue of confidence. We did end up putting Professor Anderson’s research in the book because I think there is a learning opportunity here. When it comes to talent, we need to expand our definition of talent to include confidence.”

“It’s what psychologists call volatile confidence. But the confidence that lasts that you can hang on to and that no one can take from you is the confidence that comes from overcoming hurdles from doing those difficult things,” Kay said. “And yes, from failing. Failing is just part of taking risks. You have to act more, which is why you have to drop the perfectionism.”

In addition, Kay said that people have to be themselves to have confidence.

“It doesn’t work to put on somebody else’s suit of armor and go to work every day and pretend to be somebody else,” she said. “You have to be yourself.”

Kay recounted a conversation with Christine Lagarde, the first woman to serve as managing director of the International Monetary Fund.

“She said this to us: ‘The key to confidence is authenticity.’ Or, as Oscar Wilde said, ‘Be yourself because everybody else is taken,’” Kay said. “So confidence comes from acting more, thinking less and being authentic.”