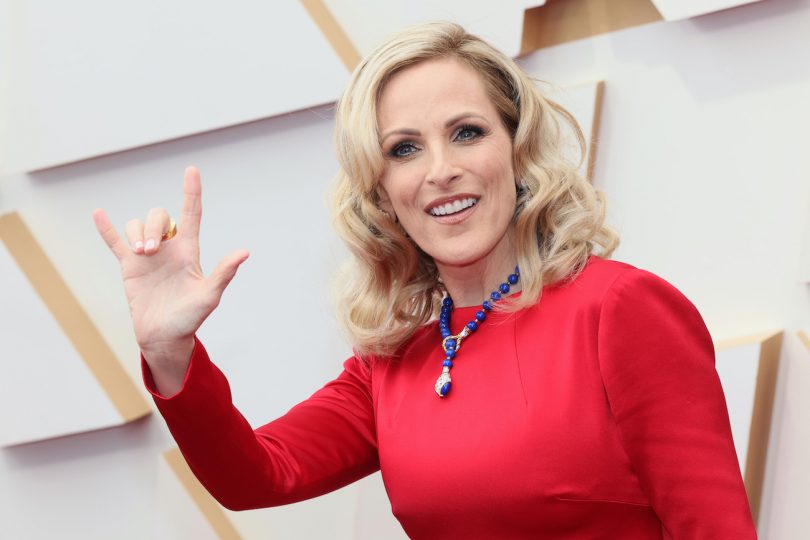 Marlee Matlin lost her hearing when she was 18 months old. As a deaf child growing up in the Chicago suburb of Morton Grove in the 1970s, she was inspired by Linda Bove, a deaf actress who played Fonzie’s love interest on the hit TV show “Happy Days.”

Since then, Matlin has gone on to have her own successful career in movies and TV, winning an Academy Award for her role in the 1986 film “Children of a Lesser God” at age 21. To this day, Matlin is the only deaf performer to win the Academy Award for Best Actress. Her many TV appearances have included “The West Wing,” “Desperate Housewives,” “Seinfeld” and “Family Guy.”

Over the course of her career, Matlin has seen changes for the better for deaf actors. She co-starred in the 2021 film “CODA,” the story of a deaf family with one child who hears. The movie earned three Academy Awards, including Best Picture. “CODA” also garnered the Screen Actors Guild Award for “Outstanding Performance by a Cast in a Motion Picture.”

An acronym for “Child of Deaf Adults,” the movie is a coming-of-age story about Ruby (Emilia Jones), a young woman who is the only hearing member of a deaf family in Gloucester, Mass. When the family’s fishing business is threatened, Ruby is torn whether to pursue an opportunity to study at a prestigious music school, which would mean leaving her parents. Matlin plays Ruby’s mother, Jackie. “CODA” has been hailed for bringing the experience of deaf Americans to a mainstream film.

Along with her successful Hollywood career, Matlin has been an activist, raising awareness for humanitarian causes. In 1995, she testified at a congressional hearing to help pass a law requiring that television sets 13 inches and larger provide closed captioning. Matlin has also championed diversity, equity, inclusion and access, along with LGBTQ rights.

Matlin is the keynote speaker on Nov. 14 during PRSA’s ICON 2022 in Grapevine, Texas. During a recent phone interview with PRsay, Matlin talked about the legacy of “CODA,” the impact of the Fonz and the importance of advocacy. Jack Jason, who has been Matlin’s  “voice” for the past 35 years, interpreted the interview for her.

What were your earliest thoughts about “CODA”?

It was the role that I had been waiting for since “Children of a Lesser God.” This script stood out so strongly to me for several reasons. One, because it was authentically written and it represented our community in a very positive light, something you don’t see very often.

It also had the distinction of being a script with three deaf characters carrying the film. Usually — especially in feature films — you’ll see one deaf character. They might be part of an ensemble, but you don’t see three deaf characters like this. I was really, really excited. And the fact that they were all in the same family, [acting in the film] was just something that I had to do.

The first day on the set, when I saw interpreters and crew members who could sign, they did it right. I knew this was going to be something unique and special. And the fact that audiences embraced it so wholeheartedly and it won the Oscar, was just icing on the cake.

You almost left the film when a big-name actor was considered for the part of Frank, eventually played by Troy Kotsur. What happened?

In the case of Frank, apparently they needed a box-office name who had a track record of earning a lot of money. And the only persons they could think of were hearing actors. They thought, “Well, let’s just get a hearing actor, teach him sign language, and he’ll play deaf.”

Well, I had been around long enough to finally get to the end of my rope and say, “Deafness is not a costume. It’s not like putting on makeup. You can’t do that any longer.”

First of all, it’s not authentic. Second, those of us in the deaf community would never believe it. If you’re going to tell our story, you need to have members of our community tell it. And who better than probably the best actor that I know of in our community, who comes from theater, Troy Kotsur.

Fortunately for us,”CODA” became an independent film, so we had more control. It was half the budget, but look at the end result.

It did pretty well!

These days, with the diversity mandate and inclusivity, to not cast a deaf person in a deaf role doesn’t make sense. I was accused, way back during the “Children of a Lesser God” award season, of not deserving the Oscar because I was a deaf person playing a deaf role. That’s how far we’ve come.

Deaf people can act. Just because the part is deaf doesn’t mean that we’re acting as ourselves. It’s a ridiculous argument. I’m glad we were able to stand firm [when casting “CODA”]. It worked out for the best.

What do you see as the film’s lasting impact, especially for the deaf community?

You can tell great stories with deaf actors. You can have successful films. You can have critically acclaimed films. Telling universal stories with people who typically have not been afforded the opportunity to be in film or to have their stories told, can be done.

We’re just another community that happens to use subtitles. People love to read subtitles these days. People turn on the captions on their TVs. I think they’re starting to realize, as a result of “CODA,” that deaf actors are just as capable as anyone else and can tell a familiar story from a fresh perspective. And that’s what “CODA” did. It brought a fresh perspective to what’s considered a young adult or a coming-of-age film, or a film about music, or a film about working-class families, whatever you want to say “CODA” is about.

Growing up, you saw the deaf actress Linda Bove play Fonzie’s love interest on an episode of “Happy Days.” What impact did seeing her have on you?

Oh, a huge impact. Everybody understands the importance of role models and mentors. But I really hadn’t seen anybody on television who was like me or who I could look up to and say, “Oh, I want to do that,” until I saw Linda. I had been acting already, but to see it on television gave me more drive and more incentive. To see a deaf woman acting opposite “The Fonz,” it was a dream come true.

You and Henry Winkler, who played Fonzie, remain friends, right?

Oh, in fact, we’re going out on speaking engagements in the next year. We tell our mutual stories about the importance of mentorship and inspiring children.

I wouldn’t be where I am today if it weren’t for Henry Winkler. He’s the one who really helped me out after the Oscars, when it seemed like my career prospects were going to be quite dim as a result of those people who said, “Why is she getting the Oscar? She’s deaf playing deaf.” Or, “She won out of pity.”

You were 21 years old when you won the Oscar for Best Actress for “Children of a Lesser God” in 1987. Did you feel pressure to be an advocate for the deaf community at that time?

I didn’t feel the pressure until people would say, “Marlee, you have to speak up for us, you have to advocate for us.” I was more than happy to take on the mantle of responsibility. As much as it helped the community, it helped me, too.

When did you start feeling comfortable in the role of advocate?

When I was sitting in front of Congress and I told them that televisions needed to be equipped with devices that allowed closed-captioning, things we’re so accustomed to now — and to watch each member of the Senate panel say “yes.” That was like 1991.

Or when I was on [the TV news show] “Nightline” in 1987, talking about the importance of having a deaf president at Gallaudet University, which is the only liberal arts university for the deaf in the world.

There were certain moments in my career that I realized, OK, the power that I have, the access to the public’s attention that I have, is a result of who I am and the Oscar that I won. So why not take advantage of it?

September is Deaf Awareness Month. What’s your message for our audience of PR professionals and communicators? How can we be better allies and more inclusive communicators?

You need to include people in the conversation who typically have been underrepresented.

If your aim is to reach as many people as possible, you have to understand that 20 percent of the population has a disability or is deaf. And more often than not, they’re left out. And one could benefit greatly by including them — not just because it’s the right thing to do, but also in terms of commercial success for whatever project you’re trying to put out there, because that’s a large number of people. We represent millions and millions of dollars of consumer buying power. And by including us, you’re ahead of the game.

In today’s politically divided world, what can you say about the importance of kindness and civility and how we treat one another?

It’s an old adage: Treat others as you would like to be treated. I think people often forget that. People can be selfish when it comes to thinking about how others should be treated. They often speak before they think. People don’t remember the golden rule, which is to love thy neighbor as you love yourself; to speak to others as you would want to be spoken to.

Civility is sorely needed in these times. People have to remember it’s about being polite. You can still disagree, but gosh darn it, I don’t know what got into people’s heads or who it was that told them it was OK to include physical violence or verbal violence. Just be kind. You can still speak your mind, but do it in a way that’s respectful.

What can attendees look forward to during your keynote speech at ICON 2022 in November?

Some heart, some inspiration, some humor. And a perspective they may not have taken into consideration before.

I may also be the first deaf person they have met in person. So I want to dispel any misconceptions or preconceived notions about what it’s like when someone they’re talking to happens to be deaf.