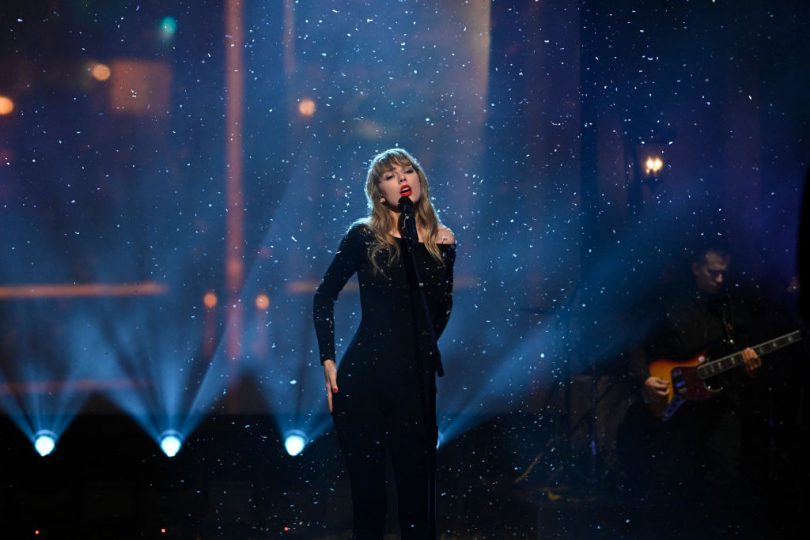 Taylor Swift seems to be everywhere. In 2020, she dropped surprise records that would become two of her best albums, folklore and evermore. In 2021, she re-released (with never-before-heard bonus tracks) two of her earlier records, Fearless (Taylor’s Version) and Red (Taylor’s Version), the latter of which debuted Nov. 12 and was streamed 90 million times on Spotify its first day.

Swift, 32, made music history when a 10-minute-long version of beloved heartbreak anthem “All Too Well,” from Red (Taylor’s Version), debuted at No. 1 on the Billboard Hot 100 chart — the longest song ever to reach that peak. She even wrote, directed and performed in a short film based on the song. On Nov. 23, her album evermore received a Grammy Award nomination for album of the year. (folklore earned that honor in 2021.)

In 2014, Swift stunned the music industry — and received respect as an activist for music rights — by pulling her albums from Spotify and other streaming services, announcing an exclusive deal with Apple Music instead. While Spotify users could listen to Swift’s music for free with ads, Apple Music is only available to paying subscribers. In an Op-Ed for The Wall Street Journal, Swift wrote that “valuable things should be paid for,” emphasizing the value of her music — and that of others.

Whether you’re a diehard Taylor Swift fan or just know her songs from the radio, her smart moves in 2021 and in the past offer lessons for PR professionals.

• Remember that you can always rebuild your reputation.

After taking a 17-month hiatus in 2016 and 2017, Swift reemerged in a way people didn’t expect. In her August 2017 comeback song “Look What You Made Me Do,” Taylor joked that the “old Taylor” was dead. The album that followed, reputation, showed she was moving beyond the public feud with Kim Kardashian and Kanye West that had surrounded her the year before.

With a solid communications plan, any brand can similarly reinvent its image and reemerge anew.

• Know that fans welcome a refresh.

Even when an organization isn’t trying to rebuild itself after a crisis, switching up the way it does things can spark positive buzz from media and consumers. In her latest song, “Nothing New,” Swift — who started as a country singer, became a pop star and has since blossomed into a serious musician and smart businesswoman — laments the constant pressure she faces to reinvent herself, always fearing that fans will lose interest and move on to the next new thing.

Brands face this pressure, too. What happens when something new (and possibly better) comes along? Will consumers remain loyal or take their business elsewhere? By shaking things up once in a while, companies can retain interest while still delivering quality.

Reinvention sometimes makes sense for a company, as long as the organization remains true to the vision its brand was built on. What does the company stand for? What are its values? What do its people care about?

When an organization reinvents itself with these questions in mind, it can, in the words of Swift’s 2020 song “willow,” recover and “come back stronger than a ’90s trend.”

• Maintain control of your brand’s message.

Longtime Swift fans knew that a 10-minute version of her beloved track “All Too Well” existed, but many thought they’d never get to hear it. As part of her rerelease of Red (Taylor’s Version), she listened to fans and included the extended track on the album, a decade after the shorter original version had been released.

Her recent performance of the song on “Saturday Night Live” became a trending topic, demonstrating Swift’s ability to score earned and social media attention while still maintaining control of her message.

She rarely shares every exciting detail of her new work at once, opting instead to release a steady cadence of announcements. (Sometimes she’ll stay quiet for several months before surprising and delighting her fans with news.)

As communications professionals, we should keep Swift’s approach in mind as we plan our own announcements. It can be tempting to dump every new thing your company is doing in one press release, but important details might get lost. Journalists and consumers may not focus on your main points.

Of course, we’re not all superstars like Taylor Swift. Reporters won’t drop everything to cover our new product. That’s why we should hold onto some exciting news to ensure a steady drumbeat of coverage all year long.

Swift’s ability to recruit former collaborators for her album rereleases shows her loyalty to them — and their loyalty to her. In public relations (and in life), it’s also essential to nurture our contacts and never burn bridges.

The communications world is smaller than we realize. Relationships and loyalty will always matter — something we know all too well.

Brooke Metz is a senior account executive at Edelman and lives in Atlanta.