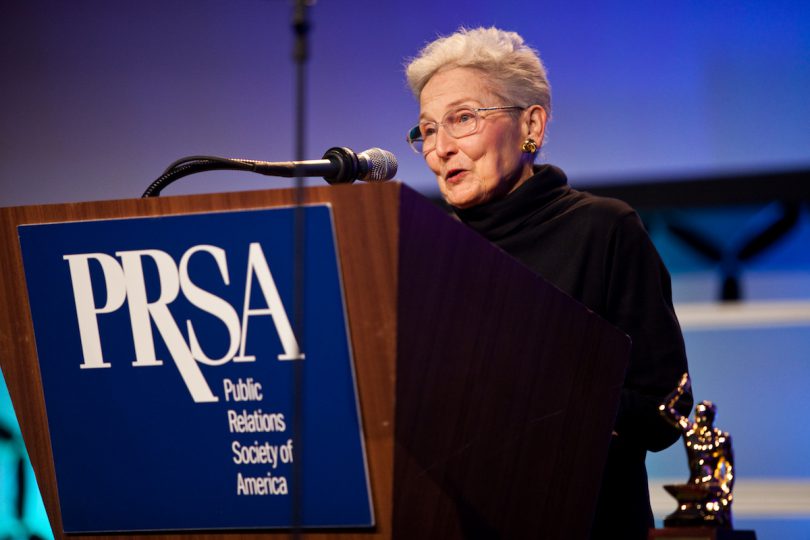 Douglas Ann Newsom, Ph.D., APR, Fellow PRSA, a longtime PRSA member and decorated PR educator, died on May 24 in Fort Worth, Texas, after a long illness. She was 87.

Newsom was a Texas Christian University professor emerita of the Schieffer School of Journalism and authored numerous books. She wrote “This is PR: The Realities of Public Relations,” first published in 1976, and was later joined by co-authors Dean A. Kruckeberg, Ph.D., APR, Fellow PRSA, and the late Judy VanSlyke Turk, Ph.D., APR, Fellow PRSA in subsequent editions.

“It’s difficult to imagine the public relations scholar/practitioner community without Doug,” Kruckeberg said. “She was a great influence and role model for hundreds of educators as well as for untold numbers of her former students who had gone on to successful professional careers.”

With more than 40 years of experience in public relations and education, Newsom was a trailblazer who set many firsts, including the first woman to win PRSA’s Educator of the Year Award in 1982, the first PR educator to be president of the Association for Education in Journalism and Mass Communication (AEJMC) in 1985, and the first recipient of the Educator of the Year award from the Public Relations Foundation of Texas in 2008.

Newsom was a 48-year member of PRSA. She served as president of both the Dallas and Fort Worth Chapters and was a national faculty adviser to PRSSA. She served as chair of the College of Fellows in 1992.

“Public relations has been my career path for as long as I can remember. Many colleagues guided that path and offered advice and wise counsel,” Newsom said at the time. “Doing the same for others is what I try to do through LinkedIn, articles, textbooks and during conferences. My mantra at TCU was ‘the most important part of your education was learning how to learn.’”

In an interview with campus publication TCU 360 in November 2007, Newsom explained her unique first name, which has been passed down through her family. Her father was Jeremy Douglas, and Newsom, an only child, was named Douglas Anne. “From an early age, she was simply called Doug. She said her full name was used only by her mother when she was in trouble.”

Newsom said that, as a child, she went by “Little Doug” because she shared the name with her father. When friends called the house by phone, they had to specify which Doug they were requesting.