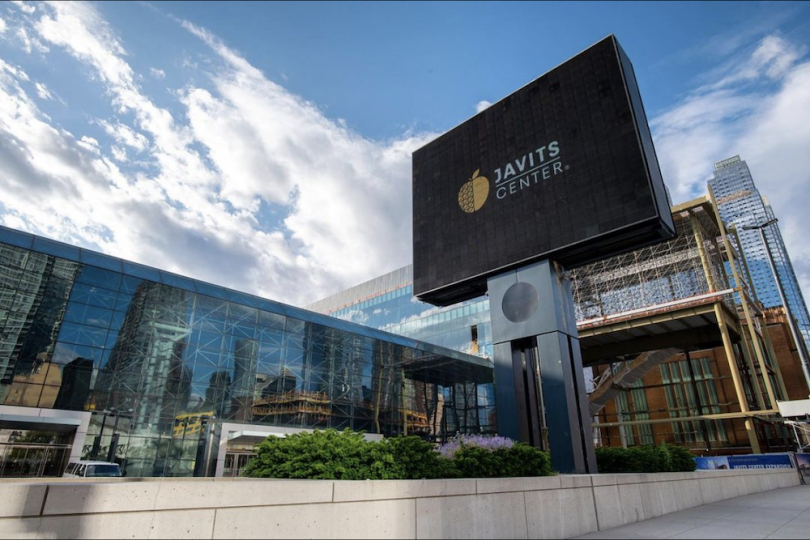 In March 2020, as New York City became an epicenter of COVID-19 infections, its Jacob K. Javits Convention Center was transformed from a top trade-show destination into a FEMA-operated medical facility — in just one week. Today, it’s a vaccination site.

Sclafani recounted how the Javits Center, home to the International Auto Show and New York Comic Con, worked with 20 different local, state and federal agencies to convert the 2.1-million-square-foot convention center into a field hospital with 2,000 patient units. What follows is an edited transcript of Sclafani’s remarks.

On the timeline leading up to the conversion:

The Javits Center is the busiest conference center in the country, with nearly 2.3 million people coming through its doors each year. On Friday, March 13, 2020, we sent our staff to work from home. The following week, calls started to come in about how we were going to be set up as a field hospital.

More than 20 city, state and federal agencies were involved. Five-hundred-plus employees worked to put the hospital together. We worked with FEMA and the Army Corps of Engineers, as well as others.

The Javits Center has 4,000-5,000 construction workers. It usually held 175 events a year, and suddenly, we had to pivot and build a hospital. We treated it like an event build-out — a high-stakes one, but similar.

Convention centers have expertise in logistics and people-flow. The difference this time was, “Are we putting our lives at risk, and what are we doing to protect ourselves?” Throughout the building, we installed new, enhanced air filters like those you would find at a hospital.

We brought in specialized cleaners to disinfect the areas that needed disinfecting. Temperature checks at the doors restricted access to certain areas. By doing those protocols, it was a safe environment, despite the circumstances.

On coordinating with the military and other agencies and stakeholders:

Everyone worked very well together. You’re dealing with the top professionals in the city, state and country.

This is unprecedented — so everyone brought their expertise to the table. We had 2,000 patient units, 50 mobile bathrooms and showers, a pharmacy, a nurses’ station and a doctors’ station.

Originally, the hospital was meant to be for non-COVID patients to relieve the burden on the hospitals, but it became a COVID hospital, which meant new restrictions.

On concerns keeping him up at night:

[T]he crisis at the time was so much of an unknown. That was the scariest part. All of us were thinking we could bring the crisis home to our families, right? When I go home at the end of the day, can I kiss my children? What do I do with my clothes? That was probably one of the greatest challenges — at least for me in my career — on how to deal with that.

My wife is a nurse practitioner. She suggested that I would have two sets of clothes. I would have a set of clothes for Monday that I’d wear, come home, wash them, put them aside, and then wear the second set of clothes, and then alternate. And at the end of all of that, we ended up throwing out those clothes.

It sounds a little crazy but, in essence, you needed to do that at that point. So that was just an extra level of stress that I dealt with, but certainly others did too.

On emergencies and crisis planning:

The Javits Center was a staging area for first responders after 9/11. It served as the main collection point for Puerto Rico after the devastation of Hurricane Maria.

We view the building as a New York City community partner. We have shown the value of having a big, open space indoors, available to the city and state as needed when times get tough. It just makes sense — as a convention center — to have this role.

On the communications function:

One of my goals was to facilitate communications with our employees who are not here. I started a daily email wrap-up of everything happening around the city, around the country, around the world and in the building. It was meant to keep us connected.

I’ve been writing it every workday, and I’m still doing it a year later. It gets forwarded to our stakeholders and vendors and contractors, everyone wanting to know what’s going on. Employees have been thanking me, saying, “I knew what was happening because of the emails.”

I was giving everyone talking points every day for the past year, so we’re all saying the same thing. And as other executives and employees are contacted by their alumni networks or their friends, they’ve come to me to ask, “What should I say? Should I use what’s in the email?” “Absolutely,” I told them, because everything I put in those emails is designed for the public to consume.

In terms of external communications, it’s fielding requests from “60 Minutes” to local news channels, giving [reporters] as much access as we can. The stakes are high and everyone’s got pressure on themselves. So helping [journalists] in that moment lends itself to stronger relationships down the road.

I only had two people under me, one of whom was furloughed. Without events taking place in the building, our budget has been devastated. We’ve taken pay cuts. I have a number of external vendors, such as a photography team, a videography team and a graphic design team.

But in those initial stages, I struggled to get a photographer and a videographer to the building. The people I worked with on a regular basis were too afraid to come. When the hospital came up, I wanted to record everything for historical purposes. It was a struggle. I managed to get some content for social media and our reports.

On working with the media and getting messages out:

Reporters, elected officials — when all are willing to work together, you end up with a better product. You can say, “I can’t offer you that but I can offer you this…” Sometimes we would record onsite and distribute it to media asking for something.

On the expansion of the convention center:

Other convention centers also were hospitals and are now vaccine sites. This reinforces the importance of these types of buildings. There are not many of them and they are unique. We’re proud of what we’ve done. We also built a 30,000 square-foot broadcast studio to hold events in the fall, which was successful, and then we transitioned into a vaccination site in 2021.

There is also a new project build-out. We were four city blocks and now we will be six city blocks with the expansion project.

If people always think of us as a hospital, that could be difficult for us. It shows our versatility and much more.

We will have a rooftop garden with fruits and veggies to use in the kitchen. We’re adding new space to social distance and already have a robust sustainability program. We’re in a good position, and this will all be over soon.

We will gather again because it’s human nature.

On lessons learned from this experience:

One thing that hit home for me from the beginning [of the pandemic is that, in PR, we tend to be] focused on a press release — on one particular story we’re going to get published. You tend to think that’s all you need to do: Write the press release and send it out. It gets picked up and you’ve done your job. But the press release is just the beginning. The story’s the most important thing. We remember stories. We don’t remember press releases.

I focused on making sure [the Javits Center was] seen as a good community partner because that’s going to last way beyond COVID. That goodwill that people have when they think of us is going to translate into business down the road when we can host events again. The story is the most important thing — not necessarily just the press release, but also social media, word-of-mouth, flyers, your website, etc.

On a message of hope:

The vaccination center is a much better story than a hospital. It’s a more positive story because we’re giving people hope. In the emails, in our social media posts, we’ve emphasized the concept of not giving up. Don’t give up on New York. Don’t give up on this building. Don’t give up on each other. It’s a message that people want to hear.

There’s also a wall of thanks on-site, where people leave messages to help reenergize the community.

Being a hospital and a vaccine site has created a tremendous amount of goodwill. I think it will make people want to have their events here in the future. We will have live events as soon as it’s safe to do so. It’s a process.