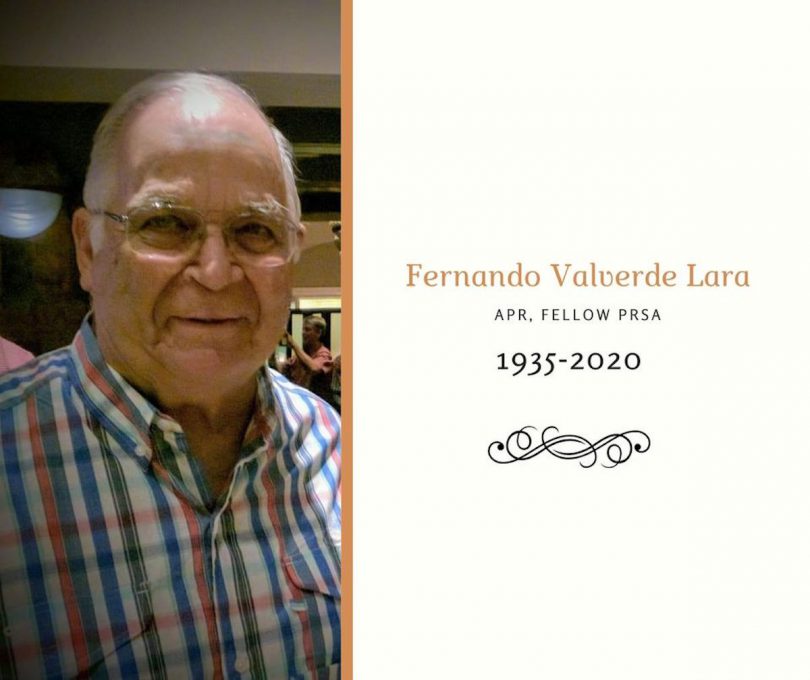 Fernando Valverde, APR, Fellow PRSA, who many consider to be the father of public relations in Puerto Rico, died on Oct. 10 He was 85.

Valverde’s dedication, sense of ethics and encouragement made him a role model for his peers.

“Fernando Valverde was a pioneer of public relations in Puerto Rico,” said Jescel Rolón, president of the Puerto Rico Association of Professional Relations (ARPPR). “His contributions to the profession, his passion and his dedication remain the most important legacy of his life.”

Rolón announced that the association will dedicate this year’s annual ARPPR Conference on Oct. 15-17 to Valverde as a posthumous tribute.

Valverde was ARPPR’s fifth president, serving in 1979-1980. He was the first PR professional to obtain the Universal Accreditation (APR) in Puerto Rico. In 1992, PRSA inducted Valverde into the College of Fellows.

In 2016, ARPPR renamed its Presidential Award — which is presented during the annual conference — as the Fernando Valverde Award to honor his journey of a lifetime in public relations.

A personal friend of the late Edward Bernays — known as the father of modern public relations — Valverde organized two visits to Puerto Rico that included talks and presentations for students, interviews in the media and special participation in the ARPPR Excel awards.

After his retirement, Valverde resided in Kissimmee, Fla. He is survived by his wife Idalia and four children.