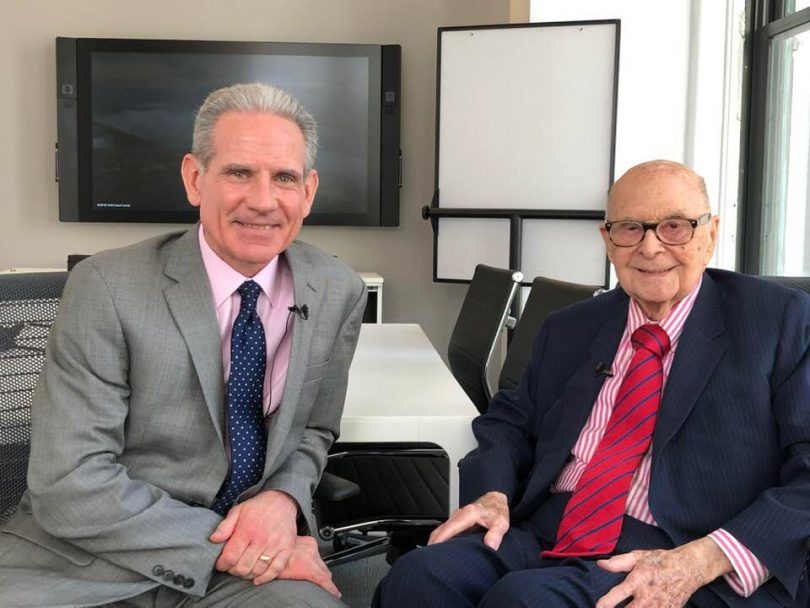 For PR pros worldwide, Jan. 10 was as consequential as Thomas Edison’s death for the engineering profession, or Henry Ford’s for the automotive industry.

That day, we learned Harold Burson, APR, Fellow PRSA, had joined the ranks of those storied pioneers, gone but not forgotten, with their legends destined to grow. Immediately, our colleagues around the world published tributes, consistently noting how he had positively changed their lives, their stories tinged with sadness but also gratitude and pride for having had a relationship with him.

Harold Burson, named the 20th century’s most influential PR practitioner by PRWeek, felt his PR legacy was defined by the following two contributions.

His first contribution was the influence of Burson-Marsteller, which led the way for agencies to evolve from a “cottage industry” to an international institution. When he first teamed with ad executive Bill Marsteller in 1953, the largest PR firm was Hill & Knowlton with about 100 employees.

His second accomplishment was the seminal moment of combining advertising and public relations. Decades before “integrated communications” was coined to describe a more comprehensive approach to organizational strategy, Burson and Marsteller called it “total communications,” and their offering changed the game. Take a moment to contemplate that PR globalization and integration owe much of their origins and maturation to a single person. What a towering legacy.

What can we learn today from Harold Burson as we contemplate his passing? As someone who first met him about 25 years ago, has read his books and posts and has been privileged enough to hear him speak and meet with him over the years, I am immediately reminded of several valuable lessons for students of public relations. And Mr. Burson believed and demonstrated that we should all be perpetual students.

“Being curious is a great property,” he often said. And this was from a man who read some 35 books a year. Mr. Burson hired for that characteristic, looking for those professionals with broad knowledge of the world and enthusiasm for diving into new content areas. That sort of professional would be of great value to clients and to any organization.

He also wanted people who could “recognize what the story is,” a wonderfully concise way to describe the ability to determine and construct organizational narratives, an essential and enduring PR skill.

A champion of research

Research was fundamentally important to Mr. Burson. He had said that our profession has an increasing tendency to “get exquisite answers to the wrong problems.”

Last year, I asked him how we could avoid that tendency and he replied, “I can give you the answer in one word: research.” Defining the problem must precede strategy formulation, and he stressed research as the first step in order to avoid ineffective answers. Mr. Burson consistently practiced that approach, and the results speak for themselves.

Mr. Burson attributed his success in leadership to “hiring better people and letting them do their thing.” He was far from a micromanager, taking obvious pride in his agency’s record of preparing employees for leadership positions, whether it be there or for a client or competitor.

He also took responsibility for employees who didn’t make it at Burson-Marsteller. “We would blow a quick whistle when we found that someone wasn’t right for us, and I considered that my fault,” he said. “I always thought I should have done something different and better to determine if someone was right for a job, so it was fairly well-known that the person you wanted to meet with should you be let go was me, because I tended to have the softest touch when it came to severance arrangements.”

Getting along with others was an important skill, not a cliché, for Mr. Burson. Recognizing that a PR agency or department must work in teams, he valued collaborators — not because they are nice (although that’s beneficial) but because they are effective.

He also recognized what he, as founder and CEO, was particularly good at, and he focused on it. “I got my kicks out of relationships with CEOs,” he noted. He was a valued counselor to such leaders as Coca-Cola’s Roberto Goizueta and Johnson & Johnson Corporate Vice President Bill Nielsen.

As a true counselor, he didn’t lead with communications tactics or even strategies — he focused on organizational goals and problems and assumed responsibility for them. He empathized.

What Mr. Burson achieved over more than 70 years is more respectable for how he did it — with humility, kindness and concern. Being with him was such an enjoyable experience thanks to his gentle manner and charm.

Here was a leader who often felt the weight of crises and critical decisions that would affect lives and careers, but he still took time to connect with people regardless of station, writing thoughtful letters that are now stored as keepsakes in countless personal files.

Of course, life lessons from Harold Burson are too numerous and profound to be contained in one article, and will take the work of many to capture with sufficient detail and insight. What lessons from him do you have to share? We’ll all benefit if you do.

Anthony D’Angelo, APR, Fellow PRSA, served as PRSA’s Chair in 2018. He is a professor of practice in public relations at Syracuse University’s S.I. Newhouse School of Public Communications and director of its Executive Master’s Program in Communications Management. He has served in PR leadership roles in the corporate and agency sectors for more than 25 years, most recently for ITT Corporation.