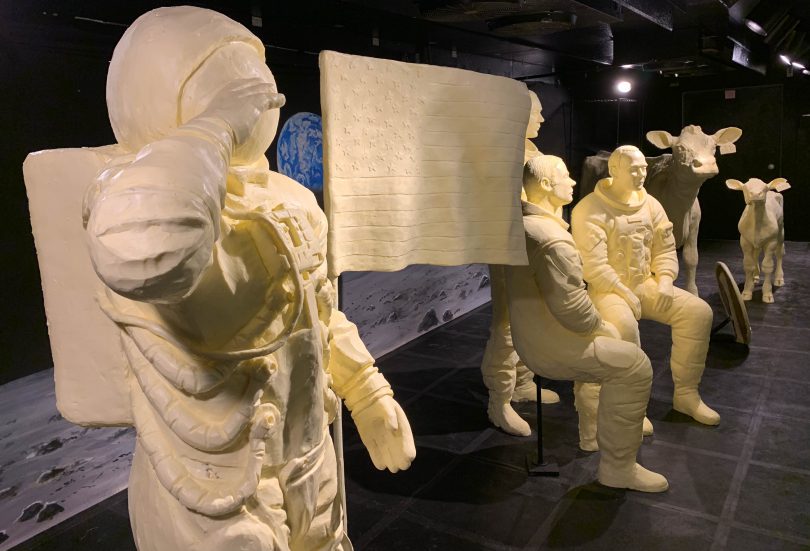 Are you struggling to make your recurring content interesting? Do you dread having to push out the same press releases each year? Are your scheduled posts just copied and pasted from last season?

Scheduled content can be a double-edged sword. Sure, it’s dependable and easy to come by. But it can be difficult to make the same annual package interesting or relevant. Often, telling stories over and over can make them seem stale, even to people who believe in the content itself.

But have no fear. Your content doesn’t have to be boring. Just turn to 2,200 pounds of butter for inspiration.

At MediaSource, we’ve been working with the American Dairy Association Mideast for nearly a decade to promote their annual butter display at the Ohio State Fair. Each year, artists turn massive quantities of butter into sculptures that draw hundreds of thousands of visitors.

The concept stays the same — it’s a sculpture made of butter. But that doesn’t mean that the promotion, coverage or storytelling strategies related to display are flavorless. Creating the yearly hype around the tradition can serve as a roadmap for how to keep all kinds of content fresh, even when it repeats.

Here’s how taking tips from the butter display campaign strategy can keep your annual content interesting and noteworthy:

Whip up a hook

The bulk of your story may be the same, but its presentation and details can change each year. Take a page out of the butter cow’s book and focus on the accompanying content to provide a new hook to keep the story relevant and newsworthy.

The 2019 display is a nod to the 50-year anniversary of the 1969 Apollo 11 mission to the moon, portraying the mission’s crew alongside the famous butter cow and calf. The 2015 display included Ohio State University football coach Urban Meyer months after the school won the 2015 NCAA National Championship. All the way back in 1983, two months after “Return of the Jedi” was released, the butter cow was accompanied by a Darth Vader sculpture.

As the communications agency working with the ADA Mideast to promote the butter display, we steer the focus toward those new and exciting attributes each year, adjusting the outreach and strategically telling the most eye-catching version of their story. By focusing on the right aspects, the story can reach the widest audience possible while avoiding becoming a retread of past years.

Churn out a surprise

If everyone already knows what you’re about to announce, why should they be interested when you announce it? Adding an element of surprise to go along with an ever-changing theme can be a way to both extend publicity and keep your audience on their toes.

Before it’s unveiled each July, the theme of the annual butter display are kept a secret. Sure, everyone knows that the cow and her calf will be there, but who or what will join them?

Being able to maintain that mystery helps create a sense of suspense that translates to a general audience. News sources don’t know the year’s topic, which makes the announcement a newsworthy event itself and the lead-up to that announcement its own news cycle. This year, that suspense led The Columbus Dispatch to post a media gallery of old butter display photos in advance of the unveiling.

What can your brand do to bring some suspense to your annual stories? Are there aspects of your content that lend themselves to an unveiling or a special announcement? If your audience knows exactly what to expect year after year, then they won’t have a reason to stay interested.

If you can’t find ways to be excited about your recurring content, neither will anyone else.

Inspiration can strike from any number of angles. Ask yourselves if there’s a buzzworthy event or national talking-point to pin the story to. Can the release of your content be tied to a major holiday, anniversary or news story? Find something that already comes with built-in excitement and use that to gain momentum.

Rather than recycling the same versions of your annual content, package it in a way that’s new. It just happens to fall on the same time each year!