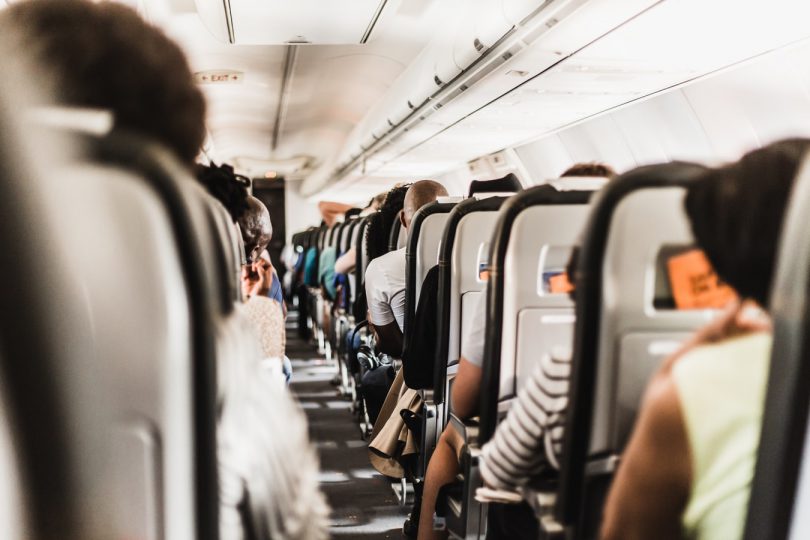 I travel a lot for my job and have a lot of travel stories that teach me life lessons. Let me share an experience that a few of you can relate to and what it taught me.

I boarded my connecting flight, eased into my aisle seat in row 25 and unzipped my bag to pull out my laptop.

But it wasn’t there!

You know the feeling when a sudden crisis hits. Your brain goes into rapid-fire. Here’s the staccato of thoughts that coursed through my head, all in a split second:

Where is it? It’s still under your seat on the plane you just got off!

That plane is going to take off and return to Salt Lake City in 10 minutes!

This aisle and jetway are full of people to climb over — but every second that passes, it will get worse.

What happened next reaffirmed to me a lesson about the power of intention, when you find yourself doing something that would normally feel uncomfortable.

Like when you need to “interrupt” a journalist’s day to propose a story idea you think they should cover; or even follow up when you haven’t heard back from them.

Many PR practitioners let uncertainty they are feeling in their gut creep into their language in the emails they write to media.

Subtle words like sorry, just, hopefully and might communicate that you’re not sure of yourself, and that you don’t expect your contacts to pay attention based on the value of what you’re about to give them. So they usually don’t.

For example, when following up with a journalist after initial interest appears to wane, here’s a common approach:

Sorry to bug you. Just wanted to check in and see if you might still be interested in this idea?

When you tell a journalist that you’re “bugging them,” that’s often how they end up feeling about you. But you convey the same point with much more power, and without any rudeness, when you simply write:

Checking in to see if this idea is still alive?

Now back to the airplane. I am not the type of person who muscles his way into things. I do not line up for doorbusters on Black Friday. I do not edge my way in front of other people in lines.

But in that split second when I resolved to GO GET THAT LAPTOP OFF THAT PLANE, I had a conviction firm enough to do something that normally would have made me uncomfortable. In this case, it didn’t embarrass me at all.

I threw my bag over my shoulder, picked up my roller suitcase with both hands and moved my way along the aisle. “Excuse me … pardon me … I need to get off the plane … thanks so much,” banging shoulders the entire way.

It’s amazing how much room is actually in those aisles when you push the limit. Took about 10 seconds.

You’d think people would be offended or at least annoyed, but nobody was. When I looked at their faces as they saw me coming, there wasn’t any frustration. They simply leaned out of the way. After a few seconds, the people in the front of the plane started stepping out of the aisle. The flight attendant even threw my suit jacket to me from the closet, otherwise I would have forgotten it.

It was like they all assumed, “Wow, he must have a really good reason to get off this plane” and didn’t judge. If anything, the expressions they gave me were more like, “Hope everything turns out OK.”

I ran through the airport to my previous gate. Arrived just in time to see the agent seal the jetway door shut.

Lungs heaving, I wheezed out, “Laptop?”

The gate agent smiled and pulled the laptop out from under her desk. A kind, unknown fellow traveler had turned it over to the airline.

I got rebooked on the next flight, and three hours later I was enjoying a meal in Memphis.

I knew I had a good reason for acting as I did. And because I demonstrated that knowledge through my words and actions, the people around me believed that I did, too.

It’s the same when you write pitches and follow-up emails. If you view it as simply “following up” because you have to, and even use those very words, then “follow up,” it rarely works. The recipient doesn’t have any reason to believe there is anything different about your outreach from the hundreds of other formulaic emails he or she has received recently.

But if you really believe in your story, then you don’t hedge your language to avoid offending or annoying. You simply state what you have to offer. Your certainty of purpose comes across and resonates.