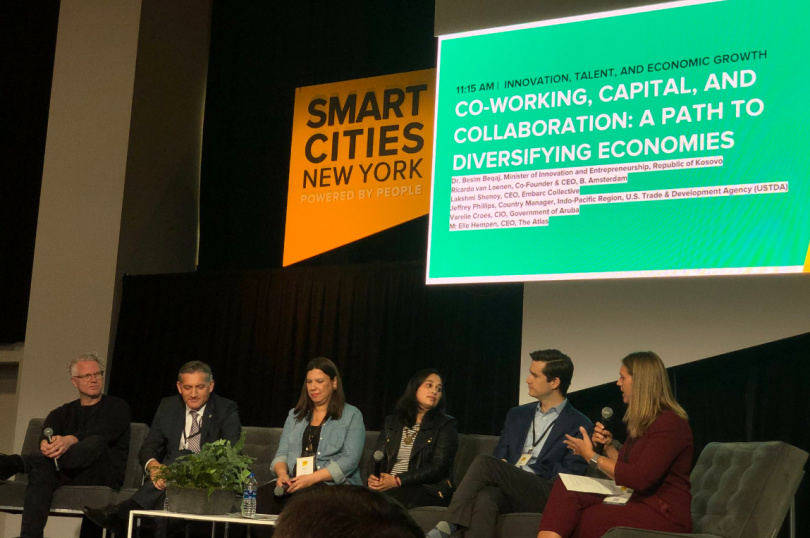 A recurring discussion at the annual Smart Cities New York conference was how tech innovations have the capacity to improve both the lives of urban citizens and the work small businesses do — if people are ready to adopt them.

“Technology alone does not solve problems,” said Jerry Hultin, chairman of the Global Futures Group and the founder of Smart Cities New York. “You need people engaged to make the solutions.”

PRsay attended the conference — which took place at Pier 36 in Manhattan — on May 14, and came away with the following observations:

On a panel titled “The Future of Work: The Revival and Reimagining of Retail,” Vikrum Aiyer, vice president of public policy and strategic communications at Postmates, talked about how his company is working to help the small businesses they service.

Though Postmates is a food-delivery platform pitched at busy consumers who don’t have time to go to a restaurant, it also can be useful for the eateries themselves. Restaurants can use the app’s data, said Aiyer, to get precise information on what menu items are selling the best, which can inspire necessary changes to everything from prices to recipes.

“If local businesses are plugged into new technologies, it can help them grow,” he said.

For Aiyer, who previously worked in the U.S. Department of Commerce, helping mom-and-pop restaurants build their customer-bases and modernize their businesses is a major part of what Postmates does. Traditional retail may be changing, but that doesn’t mean the vendors themselves can’t still successfully sell their products.

The direction of retail is brick and mortar with an e-commerce platform, he said, adding that a Postmates motto is “anyone with an internet connection and idea can sell all over the world.”

During a morning Q&A with Verge reporter Andrew Hawkins, Lyft COO Jon McNeill said that one of his company’s top focuses is environmental sustainability. Last year, said McNeill, Lyft became carbon neutral — meaning that the company is working to offset all of its carbon emissions by funding renewable energy projects.

McNeill also said that Lyft is now testing an autonomous vehicle program in Las Vegas, where users can take a ride to their destination in a self-driving car accompanied by a safety driver behind the wheel and an engineer in the passenger seat monitoring the system at all times.

But Lyft’s efforts to make cities safer and more eco-friendly aren’t just about lofty plans for the future. During his talk, McNeill discussed his company’s pro-mass transit efforts, including putting $50 million into local transportation initiatives in U.S. cities.

Lyft may be a ride-sharing app, but that doesn’t mean it can’t encourage subway and bus commuting — especially in cities like New York where traffic congestion and accidents are a recurring issue.

Many of the panelists and speakers at Smart Cities New York admitted that the hardest part of leading a tech company isn’t creating the tech; it’s getting people to integrate it into their lives.

Aiyer talked about this onboarding issue, saying that tech companies need to work harder at closing the gap in understanding between creators/experts and prospective users. If they fail to do so, then they may find it difficult to cultivate a broader appeal beyond investors and top stakeholders.

“Startups need to know the onus is on them,” he said. “Education needs to acknowledge the literacy gap, and go beyond just saying, ‘here’s my app.'”

For speaker John Paul Farmer, director of technology and civic innovation at Microsoft, his company’s key for tackling this literacy gap started with simply being aware that there was one. Innovation, he said, occurs when the following four steps are implemented:

Microsoft’s “prototype” for onboarding people into the world of tech is its Tech Jobs Academy, an 18-week, boot camp style technical training program providing in-demand IT skills that has enrolled war refugees and immigrants.

According to Paul Farmer, 94 percent of Tech Jobs Academy graduates have earned positions in tech-related fields, marking a small but important step toward a more diverse and inclusive industry on the whole.

After all, a great strategy for inspiring individuals to adopt your tech is to hire workers who resemble — and understand — the people you’re selling to.