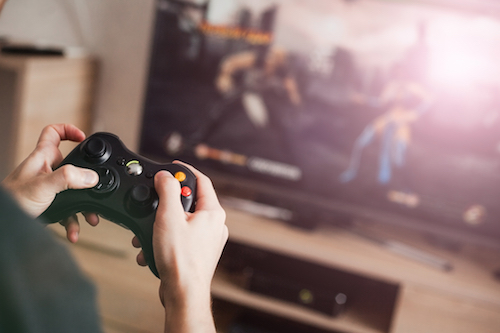 While video games are commonly considered a tool to help people unwind after work, a recent study by Brigham Young University suggests they may have a function at work, too.

“To see that big of a jump — especially for the amount of time they played — was a little shocking,” said study co-author and BYU associate professor Greg Anderson. “Companies are spending thousands and thousands of dollars on team-building activities, and I’m thinking, go buy an Xbox.”

For the study, researchers recruited 352 university students and organized them into 80 teams, making sure that none of the members already knew one another.

The teams competed for cash rewards in a geocaching game called “Findamine,” where players were given short, text-based clues and tasked with finding geographical landmarks.

After the first round, the teams were randomly assigned to one of three 45-minute sessions — team play on commercial video games (specifically “Rock Band” or “Halo 4”), quiet homework time or training discussions on how to improve team results in Findamine — before partaking in another round of searching for geographical landmarks.

Though those in the training discussions reported having more cohesive teams, participants in the commercial video-game sessions raised their subsequent average scores of the landmark game from 435 to 520.

In addition to improving collaboration among office mates, video games can also boost morale and camaraderie for remote workers.

According to the Harvard Business Review, employees who work from home or on a freelance basis often “fear that their colleagues are working against them” and “feel excluded from the company culture.”

It was this internal separation that inspired Kuty Shalev, founder of New York City-based strategic software firm Clevertech, to schedule multiplayer video-gaming sessions for her workers. When you’re forced to work together to stay alive in “Fortnite” or “League of Legends,” you have no choice but to communicate.

And communication, inevitably, helps inspire trust, friendship and greater productivity — even if some of your employees don’t have the luxury of a communal office water cooler to chat near.

“In these heightened [game] environments, people learned that they needed to speak up the moment they foresaw trouble, so they could renegotiate and form new goals or forge new paths,” said Shalev. “That alone has had a huge impact on interpersonal and work relationships within our own company.”