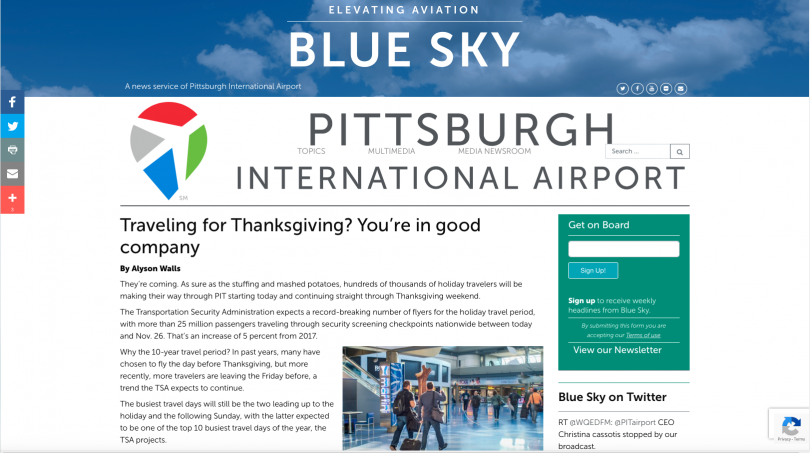 When a mainstream news outlet allocates reporters, resources and publication space to an article on the travel industry nowadays, it’s often because a crisis is involved — whether it’s a passenger getting dragged off a flight or a 10-month-old French bulldog dying in an airplane overhead storage bin.

However, these crisis-related pieces encompass only a small portion of what’s happening in the travel, tourism and aviation industries. There are other, less-sensationalized stories playing out as well, but because publications often don’t possess the bandwidth to explore them, they aren’t getting covered.

“The media landscape is continuing to change,” says Bob Kerlik, vice president of media relations at Pittsburgh International Airport. “Newsrooms across the country are continuing to shrink with less and less resources. We see this as both a necessity and an opportunity to begin telling our stories and stories within the industry.”

In response, Kerlik, a former transportation reporter for the Pittsburgh Tribune Review, and the Pittsburgh International Airport have started Blue Sky — an in-house news service where the Airport can break its own stories and not have to rely on the media reach of other publications.

“It’s about getting more information to the public, direct and unfiltered,” says Kerlik, who worked with Ragan Consulting Group to get the initiative started. “We want to be the trusted source of airport and aviation news.”

Citing in-house publications launched by Coca-Cola, Disney and American Express as sources of inspiration, Kerlik wrote, in an article introducing Blue Sky to the public, that the site’s stories will give cover specific, yet universal topics for any frequent traveler — such as what happens to luggage after it’s dropped off at the ticketing counter and the future of airport modernization. Other recurring Blue Sky subjects will range from developments about the Pittsburgh International Airport to updates and insights into the world of aviation.

From a communications perspective, Blue Sky’s creation is noteworthy in that reflects a PR strategy based on owned media — and not earned. In other words, rather than pitching publications on the happenings of Pittsburgh International Airport, the Airport is using its own platform and staff members to break the news itself.

However, Blue Sky won’t just be a place for Airport press releases and sponsored content. Rather, Kerlik wants the news service to abide by journalistic protocols, saying the publication will “hold daily news budget meetings and follow an editorial process like a newsroom.”

He also suggests that a podcast may be in the works, but that hasn’t materialized quite yet. At the moment, the immediate goal for Blue Sky is just to cultivate an audience and share fascinating, non-catastrophic air travel stories.

“In the short-term, we hope to increase the airport’s media reach,” says Kerlik. “But as the media landscape continues to shift and traditional media continues to shrink, our goal is to become the source of news that people go to for aviation trends, airport news and great storytelling.”