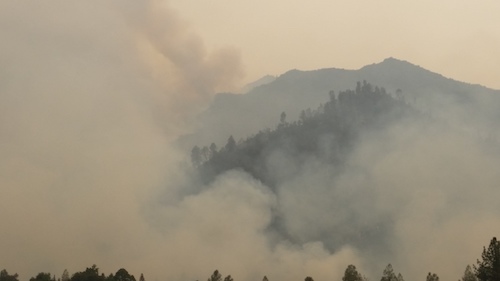 Over his 22 years as public affairs officer at Yosemite National Park, Scott Gediman has experienced a myriad of crises on the job, from floods and rock falls to hantavirus outbreaks.

“It seems like my life here is a perpetual crisis,” said Gediman, a longtime PRSA member.

However, this summer he faced one of his greatest challenges yet: the Ferguson fire in Northern California. The massive blaze closed most of the park — including Yosemite Valley — for three weeks and killed two firefighters.

The closure affected both the park and the surrounding communities during the height of the summer visitor season. The Ferguson fire was fully contained on Aug. 19, burning about 95,000 acres.

I spoke with Gediman by phone on Aug. 22 about his experiences.

What was your routine while Yosemite National Park was closed?

The fire started outside the park and moved toward us. An incident-command team came in and took over. They had 5,000 people — a huge operation.

Here in the public affairs office there are just two of us — there used to be five, and then there were four, and then three. We have a huge workload.

Jamie Richards, the park ranger who works with me, was assigned to the fire camp. That left me alone managing the press, doing 40 to 50 interviews a day, with six or seven satellite trucks here, and writing news releases. I was also working with the incident-command team about the fire, how big it was, how much acreage, containment, smoke, etc.

My house is in a different section of the park, and that whole area was evacuated. My family — my wife and two kids — had to go out of town because the smoke was so bad. I work in Yosemite Valley, so I stayed in a hotel room at Yosemite Lodge. I was working seven days a week. Physically and mentally, it was hard.

As the PR person, I have to look at impacts to visitors, including international visitors whose flights and hotels were being canceled. I always have a balancing act with the media: I don’t want to minimize what’s going on, but I’m also careful to avoid too much doom and gloom. When people start to cancel into September or October, there are millions of dollars of impact.

We always attract a lot of local, regional, national and international press. But what surprised me about this fire — and I’ve been here for 22 years now — was not just how much press we got, but that it eclipsed [news coverage of other California wildfires]. Those 40 or 50 interviews I would do in a day would be out of 70 or 80 phone calls. I just could not get to all of them.

What was unique about this fire was that it was occurring outside of the park; it was slow-moving, and they couldn’t just suppress it, because it was happening in remote, rugged areas. They burned a fire line around it and waited for it to burn into the fire lines, and it took over a month. But the press wanted flames and panic. 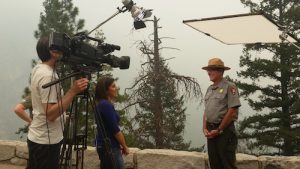 How do you manage speculation with the press?

It’s a constant challenge. I’m always very careful. I don’t speculate; I stick to the facts. Yosemite is a wild place by definition. Things happen — floods, fires, rock falls. So I always try to say, “These are the current conditions in the park.” We want to present people with the best information.

When we shut Yosemite Valley the fire folks were saying, “It could be weeks or months.” So I told the media, “It’s closed indefinitely.” We’d had five years of drought and millions of dead trees from bark beetles, and then this fire.

If I said, “We’ll open next Friday,” and hotels started taking reservations or tours started booking and then we didn’t open, people would say, “Why did you say it would open and it did not?”

It’s really tricky. Every time I send out a news release or make an announcement on behalf of the park, it impacts businesses and people’s travel plans.

Do you also manage social media for the park?

We have a social media team. As chief of the public affairs office, I write the news releases and the messages, and then the social media folks post them on Facebook, Twitter, Instagram, etc. They help reinforce our messages with the public.

How did you meet press demands during the fire?

One day during the closure, I went to the store to get a sandwich and a soda. There were three satellite trucks in the parking lot. I walk in and they’re chasing me down like paparazzi: “We want an interview, we want an interview!”

A colleague will say, “Just issue a statement.” But it doesn’t work that way. The TV folks want an interview on camera. Individual interviews are also how we convey our message. I’m a firm believer in that. Our messaging is more effective and the news coverage will be more positive if the news outlet — whether it’s print or broadcast — can get that individual attention. It results in better stories because you’re spending the time and effort.

When it comes to managing a crisis, what’s your advice for other communicators?

Have your messages ready. Be prepared with your talking points and be ready to communicate them.

Consistency is also important. I’ve seen people give different messages. Nowadays, with the instant news cycle, if one media outlet gets one message and another gets something different, it erodes your credibility.

Be responsive. I have a triage here: If a news crew is in the park, they have first priority. If they call on the phone, that’s second priority. Email is third priority.