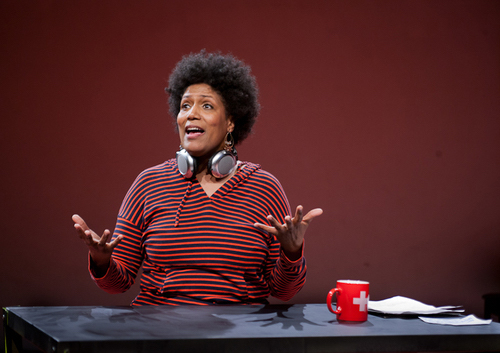 Nancy Giles, CBS “Sunday Morning” contributor, comedian, actress and self-described “Accidental Pundette,” spoke with Strategies & Tactics ahead of this Thursday’s Silver Anvil Ceremony, where she will serve as the evening’s host.

A veteran of Chicago’s esteemed Second City improv troupe and winner of the Theater World Award for the off-Broadway musical “Mayor,” Giles appeared  on the TV drama “China Beach” for three seasons. She has also made appearances on “Law and Order,” “Spin City” and “The Fresh Prince of Bel-Air.” An accomplished voice-over and radio artist, Giles has served as the voice of The Food Network for over 10 years, and has many other diverse work credits.

“I want to make people laugh, and I want to entertain them, but I also want to provoke thought and discussion,” Giles says, adding that she believes “humor bridges what divides [people] and can even stop people from shouting at each other.”

You’ve held many different jobs in your career — comedian, actor, news commentator, podcast host. How do you describe yourself?

I never say “journalist,” although people have called me one, and mostly they call me one in an accusing way when they don’t like my opinion. Journalists are supposed to just tell the story and keep their opinions out, and what I was initially hired for at “Sunday Morning” on CBS was to do opinion pieces. But that’s only part of what I do.

I’ve been doing voice-overs the entire length of my career — more than 30 years. I’ve been lucky that I can wear many different hats, because I think I would have been dead in the water in this career otherwise.

What is the most important thing you’ve learned so far about engaging an audience?

I try to make my points in a light way that resonates with people, but maybe makes them laugh and makes them think. Obviously, when I’m doing a scripted drama, I have certain constraints as to the script and what I’m saying.

But with my approach to my own work — be it stand-up comedy or solo shows or improv or writing — I try to get people laughing first. I think that’s an important thing. It opens doors. It keeps communication going, [instead of] if you’re yelling or just being angry.

Do you have any public speaking tips for PR pros?

I love being in front of an audience even more than being in front of cameras. There is something tangible about an audience, whether they’re laughing or sighing. As long as you don’t hear cellphones going off, there’s electricity that’s just there; it’s always fed me and just been exciting. You never know what’s going to happen.

There’s a live vibe that I love a lot. I get nervous, but it’s nervous excitement before I do a speech or before I go onstage. It’s because it really matters to me and I want to do a good job. But I would say to anybody who’s not used to doing public speaking: If they get nervous, then it’s nothing to be worried about. The best people get nervous because it matters, and they want it to matter. Nervous energy is good. It means you care, you know?

You did a very eloquent piece on Bill Cosby recently. How do you normally select your subject matter?

For “Sunday Morning,” I’ve pitched story ideas or commentary ideas to them, which they either go for or they don’t. In the case of Cosby — which I did have a lot of feelings about, but I didn’t know if I could necessarily get them down on paper — my boss called me on Friday of that week and said, “The verdict came out. Have you got some thoughts?” I stopped everything I was doing, sat down and started writing, rewriting and cutting. We shot it the next day, on Saturday, and then they edited it and it went on the air on Sunday. Sometimes, it happens that fast, where they’ll call with a topic.

What are some challenges of the newsgathering process today, and determining the credibility of news? How has the communications landscape changed?

The 24-hour news cycle has not necessarily been our friend, because it becomes a whole time-filling machine. A story now seems to be covered ad nauseam, to the point where any impact [it may have had] gets watered down. And I’m saying this as somebody who has — in addition to writing about and commenting [on] things on “Sunday Morning” — been on panels, mostly on MSNBC, and talked about different news and cultural stories on Ari Melber, Joy Reid, Chris Matthews, Lawrence O’Donnell’s shows (and I have the utmost respect for them).

But at some point, I started wondering if I’m part of the solution or part of the problem. I don’t know if it’s really helping — talking about these stories from all these different points of view and commenting — especially because it doesn’t seem like anyone is able to reach anyone else.

I’ve enjoyed being on those shows and, look, I am honored that I’m in a position where I can sometimes be part of those national conversations. I would like to think when I do go on, maybe I’m adding a different angle to what’s already been said.

What are some of your media habits and news sources?

You’ve given several commencement addresses. What advice would you share with the graduating class of 2018?

I talk to young people all the time and say: Get involved. It might not be the highest-paying job, but if you’re interested, if it’s something you think you could do a good job at, then try to be involved and make a difference. Don’t just sit on the sidelines and complain. A lot of young people are rolling up their sleeves and they seem to be more involved than I might have thought before. If I just went by what I thought I was seeing on social media or on TV, then I would have thought they all just wanted to be hip-hop artists or line up to audition for “American Idol.”

I’ve really been encouraged by young people and what they can do, and their capacity for understanding, acceptance and love.