Editor’s note: This post is a part of a series of guest posts from the PRSA Georgia Chapter publicity committee for the PRSA 2015 International Conference, November 8 – 10. Follow the Conference conversation by searching the hashtag #PRSAICON and following our PRSA National Events Twitter handle, @PRSAevents. 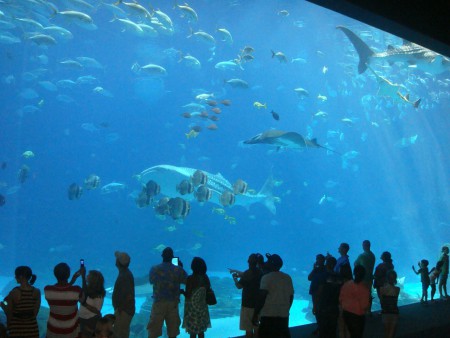 Georgia Aquarium, home of the AT&T Dolphin Tales show, is the largest aquarium in the U.S., with 10 million gallons of galleries, exhibits and aquatic animals, including beluga whales. Georgia Aquarium is the only aquarium outside of Asia to house the whale shark, the world’s largest fish. Visitors can even get up close and personal with these gentle giants in the aquarium’s swim and dive program.

…stroll through the collections of art from around the world without leaving the city.

With an eclectic permanent collection that boasts more than 13,000 works of art, the High Museum of Art is the premier art museum in the Southeast. The High partners with art museums around the world, such as the Museum of Modern Art, New York and The Louvre, to bring the world’s best art to Atlanta. Past exhibitions have included masterpieces by Pablo Picasso, Andy Warhol, Claude Monet and Leonardo de Vinci.

Born and raised in Atlanta, Coca-Cola is synonymous with our city. Visit the World of Coca-Cola to learn the story of the famous soft drink. Go back to the early years of Coke’s creation in Atlanta and follow the global brand through the decades. After you’ve refreshed yourself with more than 60 products from around the world, step out of the museum’s front door and into the hub of the convention district.

…find out why the greatest American novel was written in “The Dump.”

Atlanta is home to the Margaret Mitchell House, featuring the furnished apartment nicknamed “The Dump” by Mitchell and where she wrote her Pulitzer prize-winning novel, “Gone with the Wind.”

…race the gold shoes for a gold medal.

…be a weatherman and news anchor, all in the same day.

Ride the world’s longest freestanding escalator to go behind the scenes of the first global news network at the Inside CNN Studio Tour. Learn how to report the weather using a green screen, watch the newsroom floor as stories from around the world unfold, and keep your eyes peeled for an Anderson Cooper or Robin Meade sighting!

…fly to the world’s most accessible airport.

As the world’s busiest and most accessible passenger airport, Hartsfield-Jackson Atlanta International Airport (HJAIA) serves as a major origin, destination and connecting point between America and the world. With 80 percent of the country within a two-hour flight and more, HJAIA exceeds more than 97 million passengers annually with nonstop service to 150 U.S. destinations and more than 75 international destinations in 50 countries. The Maynard H. Jackson Jr. International Terminal is a great addition to HJAIA, allowing passengers to access the landside without having to use an automated people mover.

…find out what it takes to earn a Nobel Peace Prize or two.

Atlanta is one of the only two cities in the world to lay claim to two Nobel Peace Prize winners – Martin Luther King Jr. and former President Jimmy Carter. See the medals on display and learn about their legacies at the Martin Luther King Jr. National Historic Site and the Jimmy Carter Library and Museum. Atlanta’s history in the Civil Rights Movement was punctuated in 2014 when the Center for Civil and Human Rights opened, giving visitors a place to explore struggles for equality throughout history and engage in conversations about the future.

…order an F.O. and a naked dog walking.

Only the folks at the world’s largest drive-in will know that you’re really asking for a frosted orange drink and a plain hot dog to go. The Varsity was established in Atlanta in 1928. Two miles of hot dogs, a ton of onions, 2,500 pounds of potatoes, 5,000 fried pies and 300 gallons of chili are made from scratch daily.

Atlanta may have more than 70 streets named “Peachtree,” but don’t let those tricky trees confuse you: Peachtree Street runs through the heart of the city and will be the only guide you’ll need during your visit. From trendy Buckhead through artsy Midtown to the convention and entertainment district Downtown, simply step off Peachtree Street’s sidewalks to visit the must-sees.

Atlanta is home to not only the NFL Falcons, NBA Hawks and MLB Braves, but also to the NASL Silverbacks and WNBA Dream. Atlanta’s teams play year-round, so business travelers can walk out of a meeting and into a game. In 2017, Atlanta will welcome a new MLS team, Atlanta United FC. In addition, Atlanta hosts a number of national and regional sporting events annually.

….watch a three-course meal go full-circle atop the tallest hotel in the Western Hemisphere.

Stone Mountain Park is Georgia’s most-visited attraction. Get your adventure on by making the 1.3-mile hike to the top of the mountain, where you’ll be rewarded with panoramic views of the entire city.

…follow the footsteps of the country’s civil rights leaders.

In 2004, the International Civil Rights Walk of Fame was unveiled at the Martin Luther King Jr. National Historic Site. Using genuine shoes from each of the honorees to create the footsteps, the Walk of Fame inducted 17 inaugural members, including Jimmy Carter, Jesse L. Jackson Sr., Thurgood Marshall, Rosa Parks and Andrew Young. Each year, more foot soldiers are added to the Walk of Fame. There are hundreds of additional spaces designated for future placements of worthy footsteps.

…see puppets that are much more than socks.

The Center for Puppetry Arts, the nation’s largest puppetry center, hosts exhibits of famous puppets, presents both family and adult shows throughout the year, as well as offering workshops and classes. It is the largest nonprofit organization in the U.S. dedicated to puppetry and was chosen by MSN.com as one of the top 10 children’s museums in the U.S. In November 2015, a new expansion will open featuring more than 300 of Jim Henson’s puppets.

Rachel Peavy, director of communications, ACVB heads ACVB’s public relations department, driving communications strategies that increase visibility of Atlanta as one of the top U.S. travel destinations and which promote brand awareness that positively impacts Atlanta’s $13 billion hospitality industry. She is a former PRSA Georgia Chapter Travel & Tourism SIG Co-Chair and is serving on the host committee for the 2017 PRSA International Conference. Follow her on Twitter @PRRachel