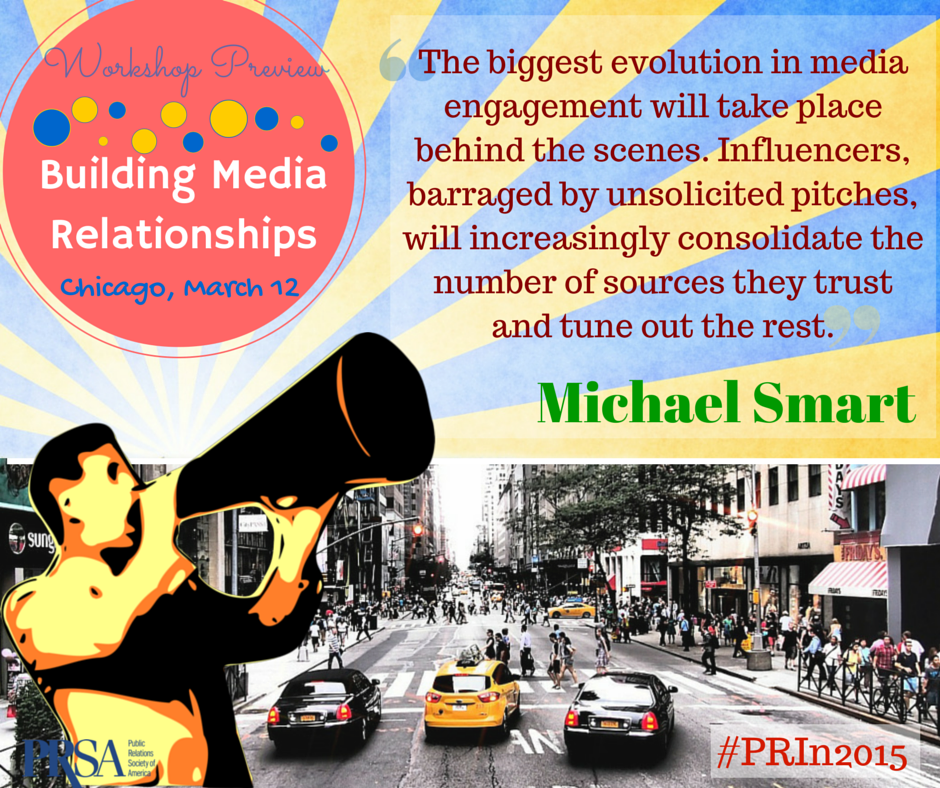 Some public relations practitioners revel in it, others dread it – pitching isn’t quite a science as much as it is an art.

It’s not always easy to know off-hand what journalists and bloggers will be looking for from sources or which topics will pique their interest, however, good public relations pros learn early in their careers that bombarding a list of 200 reporters with the same “insert-name-here” pitch is an easy way to get placed in a “Worst Pitch Ever!” article. The most effective PR people know that building solid media relationships and tailoring outreach is their best bet for landing a client the key piece of coverage they all desire, but even that is easier said than done.

Although knowing how to do something might be half the battle, it doesn’t always translate to being able to do that thing well – that’s where training comes in. We reached out to Michal Smart, one of the leading media pitching coaches in the industry to discuss media relations and pitching in 2015 in advance of his upcoming pitching workshop, “Building Media Relationships.” He offered up some tips, tactics and insight that will help get you the coverage you want this year.

What is the one, most important thing that public relations practitioners should do before they begin a media pitching project?

Michael Smart> Achieve clarity about how the results of the project will achieve bottom-line results for your employer. All the great media relations in the world isn’t effective if it doesn’t support our employers’ ultimate objectives.

MS> After determining your business goals, put yourself in the mindset of your target influencers – be sure to understand deeply what they need to provide their audiences. Then figure out how to mesh your business objectives with those journalists’ and bloggers’ needs.

What do you predict will be the biggest evolution in media engagement in 2015 and how can PR pros take advantage of that or adapt to the change?

MS> The biggest evolution in media engagement will take place behind the scenes. Influencers, barraged by unsolicited pitches, will increasingly consolidate the number of sources they trust and tune out the rest. This is a positive development for PR pros who understand how to get noticed, because after breaking through the clutter they will find it even easier than before to maintain strong media relationships and achieve consistent placements with their core influencers.

With so many pitches coming in from so many potential sources, how does one differentiate themselves in 2015?

MS> Two primary ways to differentiate yourself as a resource to media:Share a story idea that is so compelling and so absolutely relevant to their coverage that they stop what they are doing to cover it. After proving yourself in this way, you can maintain your correspondence with media and they’ll be open to your more typical ideas.

Use alternative channels to prove your credibility and knowledge of their coverage areas. In addition to emailing your reaction to a story, you can post a comment on their least-trafficked platform that adds value and propels their story forward. Reporters are telling me, “I’m going to open emails from people whose names I recognize from other platforms.”

Bottom line, how do I get my client in The New York Times (or other major media outlet) this year? And do I even want to get them in the NYT? Is there a new outlet that’s more influential?

MS> That’s a very insightful question. The number-one most stated goal from people who take my seminars is, “My boss wants us to get in (either the NYT or WSJ).” One NY Times reporter told me succinctly: “The best way to get my attention is to get me an interview with someone who normally wouldn’t want to speak with me.” Aside from that, landing top-tier media relies on a really creative angle that affects or interests people all over the country and usually is about something bigger than just one organization.

To your second point, there almost always is a more targeted or relevant outlet that reaches more of your target audience than a top-tier outlet. One of my clients, for whom the NY Times is typically the Holy Grail, landed coverage on a new science-focused web site that was shared 9,900 times on Facebook alone.

What is the best way to building an effective media tour in 2015?

MS> Unless you’re at a large company or player in your market, it’s best to initiate media contact digitally, then ask for a few minutes on the phone, and eventually ask to drop by.

Is a media tour still relevant or is there another method that will engage media better?

MS> Media tours are still worthwhile – just don’t refer to them as “media tours.” Journalists don’t like the idea of being part of what they view as a traveling dog and pony show where they are one stop among many. They are also wary of fully committing time very far in advance when they know they might be pulled away at the last minute. So keep these principles in mind when planning media visits:

What is the most difficult, but worthwhile media engagement you’ve ever worked on?

MS> The most difficult but worthwhile media engagement I ever worked on was a labor of love for a small team of cystic fibrosis researchers who passionately believed they had found a new way to treat that terrible disease. But the scientific establishment was wary, and so were the media. A New York Times reporter flew out and spent a day with them and even wrote his story, but it was spiked by an editor. A Today show crew shot for a day, but then called me back later to say that the footage wasn’t working. But they actually came BACK and re-shot it, and a lengthy positive piece aired. It was great to see the researchers’ persistence rewarded.

I’m a seasoned PR pro with a vast network of well-developed media contacts, why should I attend a professional development session like yours or change what I’m already doing?

MS> Media relations is changing so quickly there are always new tools and approaches to consider. At the same time, because of the harried nature of their work, media relations pros can get distracted from enduring principles that work regardless of tools or the environment. Experienced pros who come to my seminars say they have never previously stepped back from the bustle and spent an entire day or two analyzing and refining their overarching approach to media relations. And after doing so, they always find things to change and to add to their toolkit.

Any overarching advice to help practitioners elevate their media engagement strategy this year?

MS> Most people don’t want to hear what I’m about to share. They would rather hear about a new shortcut that promises easy access to lots of eyeballs. But the number differentiator I see in people who are achieving big-time media relations results is diplomatic but dogged tenacity. Reporters often complain about follow up emails and calls, and I don’t blame them. Most PR people do it wrong. There are ways to follow up without being annoying. When you’ve done your homework and you KNOW your pitch is relevant and useful, that brings the confidence that drives you to continue to email or even call until that pitch is considered. And that dramatically increases the number of your resulting placements.

Michael Smart is the media pitching coach PR pros turn to when they want to boost their positive media placements. He’s trained more than 6,000 communicators from agencies large and small, from Fortune 50 companies to regional non-profits.