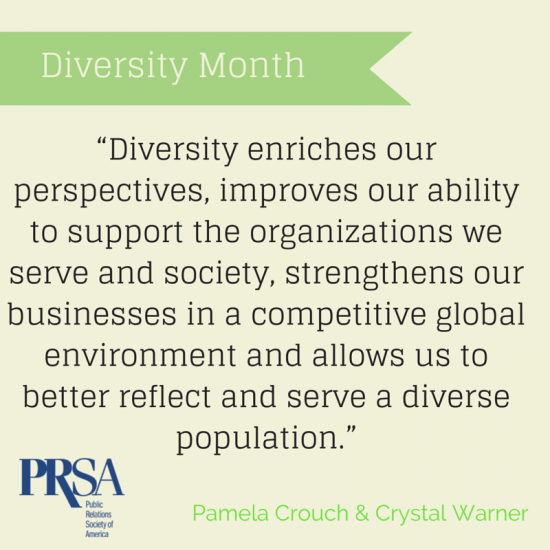 “My race is double, not half.” – Race Card Project

We’re mixed – half Asian, half Caucasian.
While our genes may only be “half” of each race, our backgrounds are a combination of two uniquely different heritages that gives us “double” the cultural perspective. We’re among a growing population of multiracial individuals who represent the increased cultural diversity of our global society.

We’re millennials. No generation before has had as much access, technological power or infrastructure to share their ideas as quickly. Not only are we the most diverse generation, but we’re also the first to grow up with the multicultural mosaic as a part of our core DNA. We embrace a wide range of cultural influences, giving us unique skills and perspectives.

We’re migrators. Neither of us are originally from Orange County, but we “migrated” to Southern California because of the diverse people, resources and opportunities that we saw in the region.

On September 18th, OCPRSA hosted its 10th Annual Diversity Forum, Moving the Needle: Exploring the Past Decade of Diversity in Business, PR and Communications. Marisa Vallbona, APR, Fellow PRSA and President of CIM Incorporated, opened the event with congratulating the OCPRSA diversity committee for their tenth anniversary. Ms. Vallbona, a multicultural woman, reminded guests of PRSA’s commitment to diversity and the importance of embracing diversity on a professional and personal level. Moderator Richard Chang of the OC Register led a panel discussion with leading diversity practitioners in agency, corporate and education PR including, Joe Keenan of MWW, Lynn Joliffe of Ingram Micro and Anne Dean, APR of Education Management Corporation. The esteemed panelists highlighted the importance of diversity in the workforce and covered topics such as public relations for the LGBTQ market, hiring a diverse workforce from a human resources perspective and diversity in higher education, respectively.

Embrace Diversity
By 2020, the country’s workforce will be older, more racially and ethnically diverse, with more women. By 2050, we will be a “majority minority” nation. Nationally, minorities represent 30% of the population, but only 16% of PR professionals are minorities. Minority under-representation will only continue to grow at a staggering rate unless we make diversity a priority. We need to make it a priority today, not tomorrow, because the growing minority and increasingly complex multiracial population will only continue to expand and evolve. As so aptly put by Mr. Keenan, “businesses that don’t embrace diversity will get left behind.” Organizations that aren’t adaptive and innovative to the changing population, trends and technologies will lose out on the immense purchasing power of these diverse groups.

Evolve Perspectives
Not only do we need to expand the definition of diversity beyond just the “visible” differences (race, gender, age) to include the “invisible” differences that make everyone uniquely different, but we also need to evolve perspectives beyond categorizing people into “boxes.” Although the U.S. Census Bureau has evolved their forms to allow multiracial individuals the option of checking more than one box to identify their race, there are still inherent limitations of forcing people to choose which “box” they want to identify with. Maybe we should think outside the box and evolve the discussion from adding new categories to redefining the categories (be that millennials, multiracials or multiracial millennials) and what the implications of them are.

Educate Others
Diversity enriches our perspectives, improves our ability to support the organizations we serve and society, strengthens our businesses in a competitive global environment and allows us to better reflect and serve a diverse population. In order to make diversity a priority, we need to educate organizations on the advantages of having a diverse workplace (e.g. increased productivity, creativity and problem solving). Upper management needs to define what diversity would mean for their organization and then build out a multicultural practice into their business plans, which could include expanding their recruitment and education efforts. It’s then our job to hold management accountable and then build engagement within local PRSA chapters and PR communities.

“Diversity is the one true thing we all have in common. Celebrate it every day.”