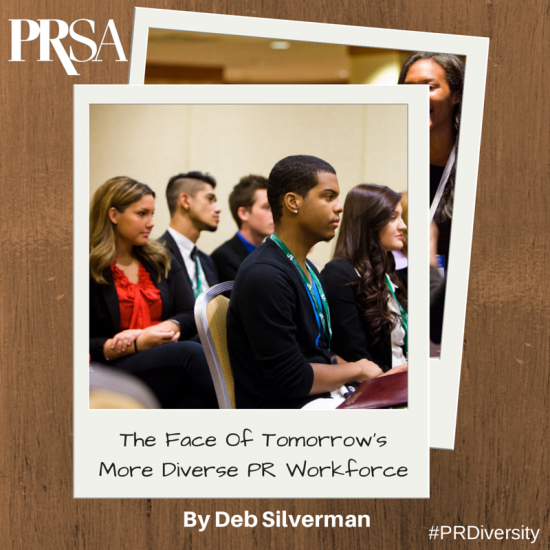 A recent article in PRSA’s Tactics captured the attention of my graduate students and resulted in a fruitful classroom discussion of diversity in the public relations workforce.

The article, “Dr. Michael L. Lomax on Creating a More Diverse PR Workforce,” summarized the speech that Dr. Lomax, president and CEO of the United Negro College Fund, gave at the PRSA International Conference on Oct. 12. He noted that although America has a Black president in the White House and the influence of diverse consumers has skyrocketed, America’s public relations workforce does not reflect the country’s diversity.

We reviewed Dr. Lomax’s comments in my graduate seminar earlier this month, and my students – a thoughtful, active group eager to discuss public relations issues – were up to the evening’s task. It is a diverse class of 16 students in terms of race, gender, and age: eight students are African-American, one is Hispanic, and seven are white; three are male, 13 are female; and four are in their forties or fifties, with the remaining 12 students a generation younger, in their mid-twenties to early thirties. All are employed either part- or full-time, most in fields outside of public relations.

“Why isn’t there more diversity in the public relations field”? I asked them. Their answers focused mainly on racial and gender diversity, but provided valuable insights nonetheless.

“Corporations aren’t thinking about diversity,” replied one student, who is employed at a local business. She believes that not enough managers are making diversity in their workforce a high priority.

Two other students noted that companies may hire those who look like existing employees, unless the companies are trying to target more diverse customers. In that case, companies may make additional efforts to recruit minority and/or female job candidates.

Several students pointed to the influence of their families in choosing a career path. “My mom wanted me to be a doctor or lawyer,” said one student, and others concurred. They said that “public relations professional” just wasn’t on Mom’s or Dad’s list of career options!

Many of my students were unaware, when they were high school students, of what a public relations career entailed. “When I was in high school, guest speakers talked about careers in the military, law, and medicine – but no one mentioned the work done by journalists or public relations professionals,” one student commented.

Although there are more women than men working in public relations today, women still face an uphill battle in the workplace overall, according to one older male student who owns a business. “It’s still a man’s world, and women have to work twice as hard as men to succeed,” he said, as several female students nodded in agreement. His comments are supported by statistics on the number of men who hold the top positions in America’s public relations firms, indicating that roughly four out of every five PR leadership positions are held by men.

So how can America’s PR workforce become more diverse?

I believe that education is key, starting with outreach efforts targeting diverse student populations in middle school and high school. Tell students what “public relations” is, the education that is required, and the many job opportunities that are available after graduation. Share the latest information on PR careers from the Occupational Outlook Handbook published by the U.S. Department of Labor.

Several PRSA and PRSSA chapters already have or are planning outreach programs to local schools, such as Buffalo Niagara PRSA and the SUNY Buffalo State PRSSA chapter, where I serve as faculty advisor.

Scholarships, fellowships, and internships targeting minority students are vitally important, such as the PRSA Foundation’s PRIME Scholars, PRSA Diversity Multicultural Scholarship, Marcia Silverman Minority Student Award and Ofield Dukes Multicultural Student Award; FleishmanHillard’s Alfred Fleishman Diversity Fellowship Program; and the LAGRANT Foundation’s Scholarship Program. I share such opportunities with my students as soon as I receive the information, and I’m sure other educators do, too.

The “face” of tomorrow’s more diverse public relations profession is already on America’s college campuses, as I know from my own increasingly diverse PR classes.  Let’s continue the forward momentum so that very soon, America’s PR workforce will reflect the diversity of the nation’s population.

Deborah A. Silverman, Ph.D., APR, Fellow PRSA, is a member of the PRSA Board of Directors, serving as its liaison to the PRSA Diversity Committee. She is an associate professor of communication at SUNY Buffalo State and faculty advisor to its PRSSA chapter.