As we approach the Delegate Assembly meeting in Washington DC October 11, I’ve had some interesting conversations with a number of PRSA members about the proposed bylaw amendment calling for two non-APR members being allowed onto the PRSA National Board of Directors. It’s a bold move for PRSA, and one that we’ve talked about for a few years but have never made a reality. This time is different.

Why? Because surveys we’ve commissioned by Kelton Research, Ketchum, and Organizational Performance Group clearly show a loud and growing voice among our membership that they want some non-APR members on our National Board of Directors. We can’t ignore the facts in front of us.

Does this dilute the APR? Absolutely not.

In fact, this is a question I’ve heard in a few of the conversations I’ve had. While the individuals I’ve spoken with all believe the bylaw amendment will make our membership stronger, they ask what this move will do to the APR. Will it weaken the credential?

When you consider that there are 17 seats on the national board of directors with only two Director-at-Large positions allocated to non-APR members, it’s evident that the credential still holds value. Any member with or without an APR who qualifies for the National Board of Directors can run for Director-at-Large, so those two seats might not always be occupied by non-APR members. Additionally, in order for those non-APR members to advance to higher positions within the board, they will have to earn the credential as only qualified members who hold the APR may serve as Directors and on the Executive Committee.

When I was elected to the PRSA National Board of Directors representing the Western District as a Director, I was just honored to be there among such capable leaders. I learned so much about leadership my first year, and I continue to learn every day I serve.  Those of us on the board learn from each other and admire each other’s strengths. We also recognize that there is a tremendous talent pool within our Society and we haven’t begun to scratch the surface.

We need to bring in new leaders and we can’t do that unless we admit that just because a practitioner doesn’t hold the APR, it doesn’t mean they aren’t outstanding practitioners and leaders with a lot to contribute.

If you had told me back in 2007 when I was chair of the Universal Accreditation Board that I would take this stand, I wouldn’t have believed it. Now I realize that it’s okay for us to be different. We’re all in this to advance the profession. Let’s work together to make PRSA better. 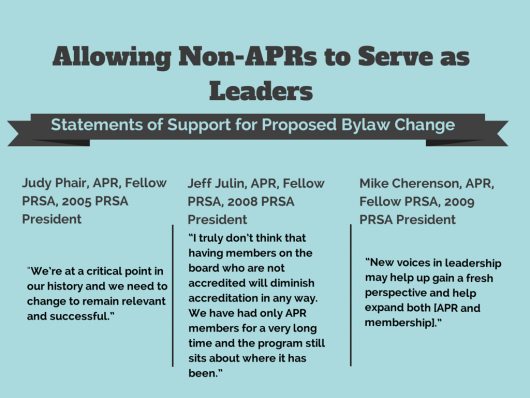 Marisa Vallbona, APR, Fellow PRSA, serves on the PRSA Board of Directors and is president and founder of CIM Incorporated, a Southern California-based public relations firm with offices in Los Angeles and San Diego.She is also the co-founder of PRConsultants Group, a national network of PR firms. She has won four Silver Anvil awards from PRSA and a Silver Anvil Best of Show. You can follow Marisa on Twitter at @mvallbona.