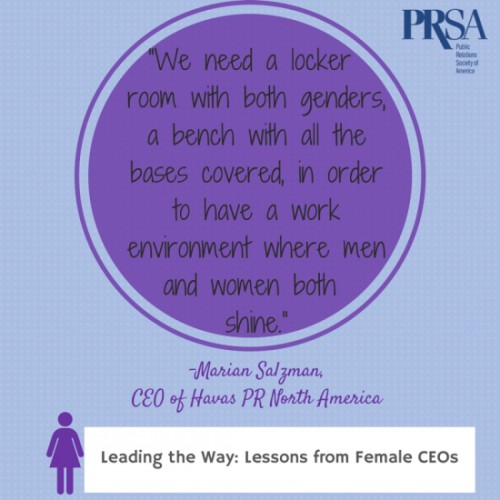 That’s a question a lot of media watchers have been asking lately. Now that the rules of communications and interaction are being rewritten by a generation of digital natives who live their lives online 24/7, it’s time to reevaluate what this job—which I have loved ever since I made the shift from advertising to PR about six years ago—really means.

Flash back 15 years and there were contrary streams of thought around PR. It was a pink-collar occupation, something attainable for girls who didn’t want to teach and definitely didn’t want to work in the service industry. Simultaneously, it seemed to offer the ultimately frothy, fizzy lifestyle, thanks to the libidinous Samantha Jones on “Sex and the City,” whose work looked to consist of little more than glamorous parties and art openings, and whose income bankrolled a snazzy loft in the Meatpacking District.

Public relations was never actually like that, of course, and by the time I made the shift to PR, we were out of the “Sex and the City” era and beginning the noirish “Mad Men” era, which presented its own romanticized version of not PR but of advertising. Although none of us wants to return to the sexism of the ’60s, hardworking copywriter Peggy Olson now seems like a better role model than party thrower Samantha Jones.

Even so, I made the leap to a job that is dynamic and draws on instinct as much as analytics, with rules that are constantly being rewritten. I find it exhilarating and rewarding, as do the talented men and women who work for me. But I can’t help noticing that so many of my staff and colleagues are women. Public relations is still a pink industry.

Leeza L. Hoyt, president of the Hoyt Organization, recently examined the reasons on CommPRO. The numbers that she pointed out are even starker than I’d thought: “Ragan.com … reported that 73 percent of the Public Relations Society of America’s members are women. Other studies point to as much as 85 percent of the industry [being] female.” (The Bureau of Labor Statistics [BLS] puts it closer to 60 percent.)

Hoyt argues that the reasons for this aren’t just the media depictions and perception that it’s a more glamorous alternative to teaching. She cites many women’s desire for work-life balance—PR lends itself more readily than some other occupations to flexible hours and working from home—as the first reason. That’s not to say anyone thinks PR is an easy job, but in our real-time, digital age, a lot of the work can be done from home.

Next, she gets a bit stereotypical, noting: “Let’s face it. Women like to talk…. Shaping and honing the message is a natural process for most women.” And women, she writes, are less motivated by money than men are.

But in the upper echelons of PR, the top brass are still typically men. Edward Bernays is widely considered the father of public relations, and Hoyt says she couldn’t find a mother. Maybe that’s because women feel less need to take credit—and understand that PR that’s well done speaks for itself. We’re less interested in the glory and more tuned in to the fundamentals of messaging and creativity.

Last month, Olga Khazan raised the same question in The Atlantic, asking, “Is it because of a lack of better options—or is it, in fact, the best possible option?” In an article that was widely shared, she posited that the freedom and sometimes even ad hoc nature of PR makes it a desirable profession for women, one they make an informed choice to enter into, often after trying something else.

Khazan writes of a woman who “fell into PR after a false start in another career—data shows that the vast majority of PR workers majored in something other than communications or marketing. Her situation is also typical, in the literal sense of the word, because [she] is a woman.”

And so, Khazan argues, it’s time to take PR more seriously. She cites a compelling post in Jacobin by Jennifer Pan that called PR a uniquely feminine form of “emotional labor.”

But before I go too far into feminist arguments and counterarguments, Khazan—who writes that she herself worked briefly in PR as an intern before choosing a career in journalism—quickly comes back to explain that “the feminization of PR isn’t a product of some sort of mass hysteria (sorry) by female liberal arts majors. It’s very rational. Jobs for public relations specialists are growing at 12 percent a year…. These jobs also have something that most stereotypically ‘female’ jobs don’t have: good pay. While female news reporters make $43,326, on average (to men’s $51,578), female PR ‘specialists,’ the lower-level job in the BLS categorization, make $55,705…. The average for full-time female workers is $37,232.”

That’s good news for those of us in PR, of course. But we need a locker room with both genders, a bench with all the bases covered, in order to have a work environment where men and women both shine. My biggest regret about switching from advertising to PR has been leaving a gender-neutral, everything-goes-world to thrive in a light pink ghetto.

A post of mine last year after the Cannes Lions festival got a lot of attention when I said this:

The best Australian work exudes a great masculine energy, something we’re sadly missing over here. The American PR industry has become so feminized and so politically correct that I worry about where the edge has gone. It’s not even in Brooklyn or Long Island City anymore. We’ve institutionalized all the hot shops, softened their edges and finishing-schooled the brashness right out of them.

I am certainly not knocking equality. I just wish men and women could park gender at the door when they walk or telecommute into the workplace. Only then can we close the gap that still feels real between the pink press pit and the male heads of holding companies. And, just for the record, as one of those women who have sat like a bridge between them (the men in pinstripes) and us (the women in DVF and Theory), I don’t sit in an office—although I was given one, the only one at my agency—but in the press pit where awesome men and women toil.

Marian Salzman is the CEO of Havas PR North America and chairs the Global Collective, the organizing collaborative of all of the PR assets of Havas. Marian also advises the Berlin School of Creative Leadership’s M.B.A. program and is a member of the mentoring board of Brown University’s Women in Business. Follow her on Twitter @mariansalzman