Public Relations is often about juggling responsibilities, wearing many hats and managing multiple projects at one time. We must seamlessly move from our pitching responsibilities to dealing with a crisis. Sometimes we’re faced with an ethical conundrum at the same time that we are polishing off a brand journalism piece for a client website and simultaneously 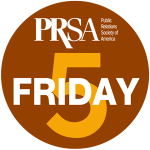 dealing with customer service issues on social media channels. With a regular assortment of responsibilities, a PR practitioner is rarely bored.

In this week’s Friday Five – an analysis of the week’s biggest public relations and business news and commentary – we will discuss public relations stories concerning various topics. We’ll look at a PR professional’s unethical offer to a journalist, a follow up on a journalist who answered every PR pitch for a week, a survey on how Americans trust the mass media and the NFL’s PR effort. We’ll also examine how women’s roles shift during a crisis.

PR pitch: We’ll pay you to mention our clients (CNBC)

A CNBC freelancer shared a pitch he received from a public relations professional last week. It read:

“I would be asking you to include our clients in stories you’re working on (assuming there’s a natural fit) or pitch your editors on new stories that include discussion of our clients. We’re not looking for you to promote or shill for anything. Just include discussion of our clients in a natural, organic way. What we’re paying varies wildly depending on quality of the secured hit. We’ve paid up to a dollar per word for great placement. What payment structure would you be comfortable with?”

George Johnson, chair of PRSA’s Board of Ethics and Professional Standards (BEPS) is quoted in the article, saying that this type of behavior would violate at least three provisions in the PRSA Code of Ethics. The PR agency, Status Labs, claims that they would not ask a journalist to do this without a form of disclosure.

Read the full article on CNBC and let us know what you think of this proposition in the comments section.

Dear PR People Everywhere: I Am Not Your Savior (Newsweek)

Last week Newsweek reporter Zach Schonfeld opened the eyes of many PR professionals after he reported on his experiment to answer every PR pitch that came his way for one full week. This week, as a follow up to his original piece, Schonfeld seems baffled that the PR industry has learned from his experiment and wants to thank him for it.

“But suddenly, the PR world cast its seedy eyes on me, a new idol: What can you teach us from your journey into hell? How can we improve the PR/reporter relationship? Do you control your CisionPoint profile? Why not just reply asking to be removed from all those lists?”

What did you take away from Schonfeld’s article? Read his full account via Newsweek.

How much value do you or your clients place in obtaining a media placement? Does it matter that 60% of Americans do not trust the media?

According to Gallup, “After registering slightly higher trust last year, Americans’ confidence in the media’s ability to report “the news fully, accurately, and fairly” has returned to its previous all-time low of 40%. Americans’ trust in mass media has generally been edging downward from higher levels in the late 1990s and the early 2000s.”

Does this change your perspective as a PR professional? Read the full article via Gallup.

Ad Review: NFL PR Effort Is as Laughable as Its Morals (AdAge)

In February, after Ray Rice was caught on tape dragging his fiancée out of an elevator, the NFL made the decision to only suspend him for two games. Following public backlash, the NFL changed its policy toward domestic abuse for all cases moving forward. While some thought this was the proper response, it was eventually trumped by another video from inside the elevator which showed the devastating knock-out punch from Rice that started the examination.

While the Baltimore Ravens and the NFL released Rice indefinitely, the article author Ken Wheaton explains why this was a problematic PR move: “Message: Domestic violence will be punished when caught on embarrassing videotape. Mr. Goodell and the League then swore up and down that this was the first they’d seen of the video. It was a page straight from the ‘They’re Idiots, They’ll Believe Anything’ PR playbook. And then the AP reported that someone had sent the video to the NFL back in April.”

Read the full article, including more troubling evidence, via AdAge.

Why it takes a crisis to get women in leadership (Fortune)

Roger Goodell, NFL commissioner, announced this week that he hired three new professionals to “help lead and shape the NFL’s policies and programs relating to domestic violence and sexual assault.” What did these professionals have in common? They were all women hired to work in a male-dominated office.

Caroline Fairchild, Fortune reporter, explains why the NFL took this step: “Why does it take a full-blown crisis for organizations to bring in women to key leadership positions? The answer is a complicated one, but it is perhaps rooted in the stereotype that women don’t take risks. As the NFL works to restore its image as a family-friendly organization worthy of female fans, the last thing it wants is to bring in risk takers who could make the problem worse. Instead, they hire women who they believe can manage the crisis in a calm and effective manner.”

Read the full article, along with quotes from experts on how the NFL crises could’ve been avoided by having women at the helm to begin with, via Fortune.