When a tragedy occurs, PR professionals should understand that there is a fine line between an opportunity and shameless self-promotion. This week, with the death of beloved actor and comedian Robin Williams, we had the unfortunate opportunity to see many practitioners blatantly step over the line for the benefit of their clients and organizations. While some misdirected tactics may be a lesson in how not to respond to a tragedy, we have benefited from some appropriate responses.

In this week’s Friday Five – an analysis of the week’s biggest public relations and business news and commentary – we share five recent news stories demonstrating the right and wrong ways to respond to tragedy. We’ll look at PR pitches aiming to capitalize on Robin Williams’s death, hashtag activism following the shooting death of Michael Brown, NASCAR’s response to a fatal accident and Malaysia Airlines’ reliance on social media after two tragedies. Finally, we’ll analyze the media’s coverage of the Ebola outbreak.

The heart wrenching death of Robin Williams elicited many strong responses by fans and followers. Instead of respectfully honoring the late actor, certain PR practitioners decided to use it as an opportunity to tout their brands or products – none many of which actually had nothing to do with suicide prevention or Williams.

Read the full article, with other perplexing examples, via the Washington Post.

#IfTheyGunnedMeDown and What Hashtag Activism Does Right (Time)

After Michael Brown, an unarmed African-American 18-year-old, was shot to death in Ferguson, Mo. by a police officer, the media quickly shared a photo of him apparently “flashing gang signs.” Certain members of the media judged Brown by one photo, grabbed from a collection of pictures available online. While angry protesters took the street in Ferguson, across the country, others took to social media using the hashtag #IfTheyGunnedMeDown coupled with photos – one photo that might be considered more benign than the other  – to show how off base assumptions can be.

The author, James Poniewozik, explains why this “hashtag activism” worked well: “#IfTheyGunnedMeDown was a simple, ingenious DIY form of media criticism: direct, powerful, and meaningful on many levels. It made the blunt point that every time a media outlet chooses a picture of someone like Brown, it makes a statement. It created identification: so many ordinary people–students, servicemen and women, community volunteers–could be made to look like a public menace with one photo dropped in a particular context.”

On Saturday, star NASCAR driver Tony Stewart hit and killed 20-year-old Kevin Ward Jr. in a tragic collision during a race. Amidst accusations about Stewart’s intentions following the incident, Stewart’s representatives stated that he would race again less than 24 hours after the accident. While Stewart ultimately decided not to race, NASCAR crafted the following tweet about the incident: 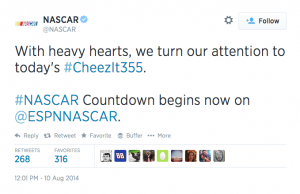 NASCAR’s series of tweets intentionally coupled their response to the accident with promotion of another race. The tweets were a part of a string of missteps by the Stewart camp and one of the largest professional sports entities in the world.

Read more about the aftermath of the collision via Salon.

In a short period of time, the crisis communications team at Malaysia Airlines had to handle the disappearance of Flight 370 and the downing of Flight 17. While at first the airline’s Facebook and Twitter accounts served as a memorial to the victims, it is now the center of their brand rebuilding strategy.

Malaysia Airlines began a social media push in late July to repair their brand. They launched two high-profile hashtag campaigns, #staystrong and #flyinghigh, with the slogan “Tough times do not last, tough people do.” While the author, Robert Mann, notes that social media cannot heal all of the airline’s wounds, it might help to start the process.

Read the full article via AdWeek.

Dr. Sanjay Gupta believes there is a panic in the United States stemming from the television coverage over the outbreak of the Ebola virus in Africa. He notes that TV news paired with people not reading the full story, but only headlines is what’s to blame.

Dr. Gupta said, “There are people who are really, really sort of nurturing that hysteria… And the other side, the other extreme is people [who] are completely dismissive of fears, very clinical, just presenting the science. And as you might guess, I think the right way for television is somewhere in between, obviously making sure the science trumps it.”

Read more from Dr. Gupta and the CDC director via the full article.