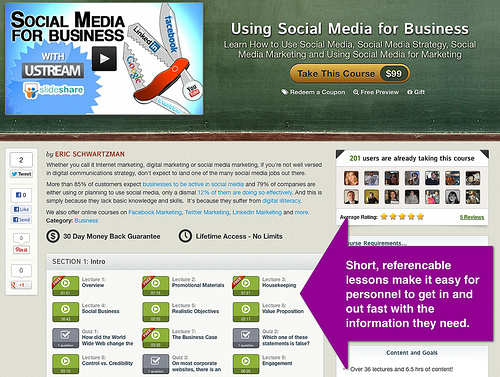 As communicators have focused on building out these channels independently, it has become clear that social marketing by itself isn’t enough. Social media is unlike mass media; distribution alone doesn’t penetrate the social filter. In order to reap gains, conversations or action must take place. With no clicks, the whole exercise is for naught.

So what do you do? Involve your team and broader organizational stakeholders. Scaling social media engagement through enterprise-wide social media training is about mobilizing everyone to collaborate transparently.

Assuming your organization has a fair, responsible social media policy (i.e., one that doesn’t scare everyone into complete silence), the easiest next step is to scale engagement.

Employees have a vested interest in the organization’s overall success. However, we also know that external communications — particularly when they’re driven by those unskilled in the art of public disclosure — can easily be taken out of context by competitors or critics and quickly spin out of control.

When you’re ready to bring colleagues together to start playing as a team, and perhaps even discuss the prospect of securing a portfolio of social media training online with your boss, here’s what you need to know about how online social media courses can help prepare the organization for greater success: 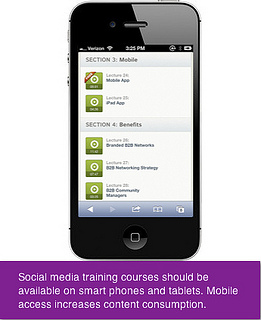 1. Social media is a team sport. On social media, reach is a factor of engagement. The more people like, comment, retweet and +1 a share on a social network, the broader and further it travels. Posts that attract the most engagement are also the most visible. When someone interacts with a post on a social network, they do so in front of their online friends. If any of their friends engage, that message gets passed along. If you train the whole company and teach how to engage in company communications, the result is social media marketing at scale.

2. Policy isn’t enough. A social media policy is a critical component of any social media strategy. However, a policy only provides value if people actually read and understand it. “Probably as important as the policy itself is the training and the guidance that you give people around the policy. The best policy in the world is kind of useless if it sits on a shelf or it’s on your intranet and either people don’t look at it or really understand the nuances,” Daniel M. Goldman, general counsel at the Mayo Clinic, told me in a recent episode of the social media podcast On the Record…Online when discussing HIPPA compliant social media policies.

3. Official channels are less trusted. As much as digital natives have the impulse to share, most organizations have the impulse to channel communications through a public relations representative or their leadership. Now that everyone’s on social media, that strategy doesn’t work as well. Here’s why: there’s an increasingly wide gap between the degree of trust we have in institutions versus their leadership. It’s even wider for government than it is for business, and it shows that relying exclusively on CEOs and official spokespeople for external communications is a losing strategy. We trust subject matter experts more than the PR of the C-suite, research shows.

4. Industry leaders are tech savvy. Digital leaders in business outperform their peers in every industry. Businesses that invest in technology-enabled customer engagement and internal operations initiatives are, on average, 26 percent more profitable, and enjoy 12 percent higher market valuations, says a new report from CapGemini and MIT. Given the ease with which it enables collaboration, social media has the potential to supercharge customer and employee communications.

5. Training helps minimize employee turnover. Over the last two years, nearly half of all employers have had to deal with the misuse of social media by employees (or former employees). During that same period, nearly half of all employers have allowed access to social media sites at work, and these numbers are steadily rising. But less than one-third actually train personnel on the responsible use of social media at work, according to a recent report by Proskauer International. Providing access to social networks in the workplace without offering social media training is an ineffective way to achieve compliance.

Your colleagues are already using social media in the workplace to stay current on industry trends, collaborate with their coworkers, and to source and procure suppliers and service providers. Search tools and social media make it easier for them to get their jobs done. Why wouldn’t they take the shortest path to achieving their objective, and why wouldn’t you encourage them to do so? Remember, the by-product of all those online discussions is an arsenal of tweets, status updates and posts that become a trail of digital bread crumbs that lead back to you.

Eric Schwartzman is CEO of Comply Socially, an online social media training provider, and best-selling co-author of “Social Marketing to the Business Customer.” His “Social Media Bootcamp” is available to readers of this blog for 50 percent off through May 1, 2013.