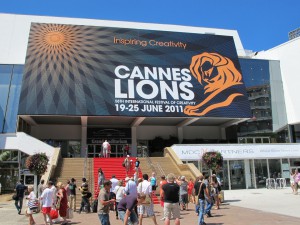 It was a jam-packed week at the Cannes Lions International Festival of Creativity and I’ve taken in as much as humanly possible, picking and choosing the most interesting speakers and topics to me. The best way to provide a round-up is to impart one key factoid, quote or provocation from each of the presentations I really enjoyed:

This was my third year at Cannes, having served on the inaugural PR jury in 2009, and each time I’ve thoroughly enjoyed Saatchi & Saatchi’s New Directors Showcase. It is about as far away from PR as it can get, but it’s highly entertaining to see the excellent videos and films from new people.

My favorite this year was called “Dogboarding” by The Daniels, featuring dogs as skateboards and smaller ones as rollerblades. Hysterical; but importantly, no animals were harmed in the filming.

The 2011 PR Cannes Lions were among the first to be awarded earlier in the week and showcased some great work. It continues to be a disappointment that so many of the awards went to non-PR agencies. Of the 11 Gold Lions, only one was awarded to a PR consultancy, Prime PR in Stockholm, Sweden, for its Electrolux Green Range of Vacuum Cleaners campaign (my personal favorite). The Grand Prix went to Clemenger BBDO Melbourne for its Break Up campaign for National Australia Bank. Six awards in the Silver and Bronze categories went to PR firms; but out of a total of 28 Silver and Bronze Lions, it’s still an underwhelming representation.

Fingers crossed for a better year for PR firms in 2012. The client community is taking more notice (Clients accounted for 20 percent of delegates this year.), so it’s becoming increasingly important!

And with so many clients at Cannes, it was a great venue to launch my book, “The Changing MO of the CMO,” in a workshop I shared with retired Unilever CMO Simon Clift, retired Diageo CMO and Wharton professor Rob Malcolm, and Marc de Swaan Arons of EffectiveBrands.

MaryLee Sachs was most recently U.S. chair and worldwide director of consumer marketing at Hill & Knowlton. She is the author of “The Changing MO of the CMO: How the Convergence of Brand and Reputation is Affecting Marketers.”