As public relations evolves to include data analysis that measures campaign results, communicators might be reluctant to embrace these new tools that have not traditionally been part of the profession.

But according to Mark Weiner, chief insights officer at PublicRelay — a Tysons, Va.-based media analytics company for communications professionals — while some measurement programs can be complicated and expensive, “there’s also a cost for not doing it.” And some campaign-measurement tools are inexpensive or even free.

Weiner spoke with John Elsasser, editor-in-chief of Strategies & Tactics, during a Feb. 17 livestream on PRSA’s LinkedIn page. The event kicked off the new Strategies & Tactics Live series, which gives readers deeper context on articles published in the award-winning publication and the chance to meet its contributors. The live webinars will also be recorded and archived on PRSA’s LinkedIn page. 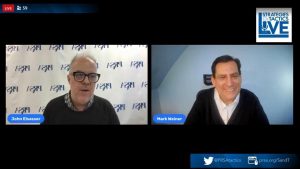 Weiner’s article “5 Ways to Measure PR Performance, Value and ROI” appeared in the January 2022 issue of Strategies & Tactics. As the article pointed out, free tools such as SurveyMonkey help communicators measure the success of their campaigns. And as the definition of communications broadens to include paid and owned as well as earned and shared media, PR teams are now responsible for monitoring their website traffic. But they can use free analytics tools such as Google Search Console.

“There are ways to integrate those data streams and analyze them more holistically, where we can segment the contribution that media, social media or the website has made on business outcomes,” Weiner said. A human element is needed to interpret the data and thus inform business decisions, he said.

To measure the efficacy of your communications campaigns, “Begin simply, but simply begin,” Weiner advised. “The process has a way of evolving once the commitment is made.” Think about campaign results that are measurable, reasonable and meaningful for your organization.

Most often, PR people measure their campaigns to prove the value of their work, he said. But value judgments are subjective. What you measure should depend on the organization’s objectives and the resources available to the communications team, he said.

Measuring communications results lets PR pros speak the language of the boardroom, which is data, Weiner said. He’s encouraged by the number of data scientists now working at PR agencies and on corporate communications teams. “This is a big departure. The profession is catching up with business.”

Once an organization’s leaders “develop an appetite and an understanding for what is meaningful, reasonable and measurable” in public relations, “they will evolve, as the communicator evolves,” he said. “It’s a key that unlocks the limitations that others impose over public relations.”