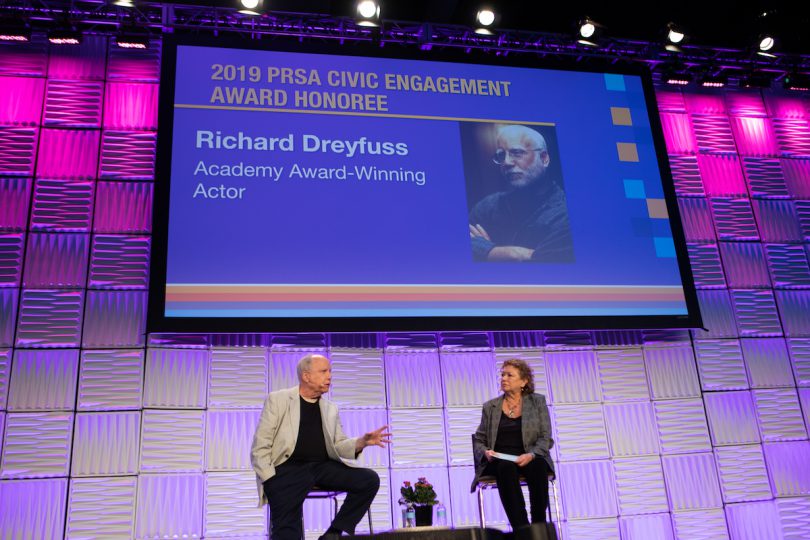 PRSA presented Richard Dreyfuss with its inaugural Civic Engagement Award yesterday during the 2019 International Conference in San Diego. The Academy Award-winning actor, who is passionate about bringing civics back to the American classroom, founded The Dreyfuss Civics Initiative to prioritize civics education.

In a conversation with Rita Tateel, president of the Celebrity Source in Los Angeles, Dreyfuss said that he “comes from a very political, activist background” and was inspired by his great-aunt and grandmother who were activists and wanted to see change and promote the will of the people. “I’m always asking myself: What would my grandmother do in this situation?” he said, noting he’s acting in “a lot of movies, and they all share in reflecting my own ethics and beliefs.”

Civics, which he defined as “your involvement as a citizen in the political activity of your nation, and maintaining civility and civic discourse,” remains top of mind for him.

Dreyfuss eventually took an acting hiatus to attend Oxford University to study civics, “a word that is intentionally boring,” he said. “It’s not the word that I care about; it’s the actuality [and activity] of civics.”

He noted that while civics had been a cornerstone of education in schools, it began to disappear in the early 1970s, and was obsolete by the mid 1980s.

“There’s nothing funny about it; it’s a desperately critical, damaging thing,” he said. “We’ve lost the only binder that has kept us together as a nation, and we’ve been in a spiral of decay ever since.”

We need to learn civility and how to talk to people with different views than us, he noted. “Civics is learning how to share political space with those with whom you disagree. The fact that it’s not being taught has consequences that we’re living through right now.”

Dreyfuss sees the importance of learning about mortgages, financial planning, creating a budget, home economics — what you need to know when you’re try to buy a house, work, have a family or buy a stock.

“We just yell and scream at each other and interrupt — and we don’t teach any alternative. We need to get people to speak with each other across this bitter divide,” he said.

He put out a call to action for our society to respect teachers more and to teach kids to debate. “Be comfortable with civil discourse. Teach them to form and write clear thoughts and opinions. Don’t shy away from teaching this in schools,” he said. “Every separate generation has to do this for themselves.”

Dreyfuss stressed that we must remind young people that they have an obligation to themselves and their nation. In addition, we must allow teachers to teach the subjects that they’re passionate about without being inhibited by opinionated parents, he said to an applause from the audience. “My goal is to make sure that the [applause] that you just expressed lives past the moment you get to your car.”

“We need to teach our kids how to run our country, before they are called upon to run our country… if we don’t, then someone else will run our country. “[Don’t] give up any notion of participatory citizenship, which is the highest sovereign power. You have the right and the power to put someone in office. And you are responsible for changing our school system.”

Dreyfuss implored the audience to “tread quickly” and to think things through. “Until we get that civic engagement back, we will be dragged back and forth from one partisan passion to another,” he said. “We need to remember that due process is the process due to any human being in any decent society.”