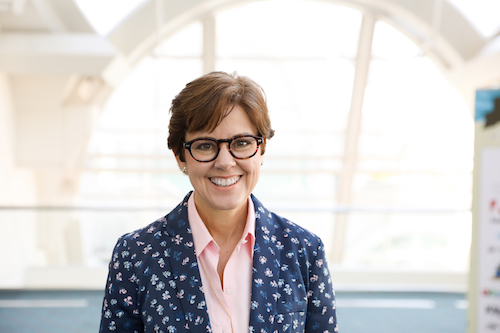 Ann Handley starts each day by writing an email to herself.

For the Boston-based content strategist and digital marketer, it’s one way that she practices what she teaches: making writing a habit.

In her daily emails to herself, “I don’t write about anything in particular,” said Handley, who will be the General Session speaker Oct. 9 during the PRSA 2018 International Conference in Austin, Texas. “Some days I’ll have something on my mind, and some days I won’t. You don’t have to use a quill pen and Heirloom stationery and write beautifully. You just need to write down a few ideas every day, and not worry about anybody ever reading them or whether they even sound coherent. It’s the art of developing a habit.”

In anticipation of Conference, Handley — who is the author of several books, including “Everybody Writes: Your Go-To Guide to Creating Ridiculously Good Content” — caught up with PRsay to discuss her strategies for improving one’s writing.

What’s your definition of good writing?

We all want that magic formula. [Laughs] But the truth is that there’s no one way to write well or one thing that makes great writing. There’s no template.

But good writing does have some common themes. First, it’s real and honest, and sometimes raw. It feels like it’s telling the truth. When I say that to a professional audience, they might respond, “Well, yeah, but I’m writing about a technology solution.” It doesn’t matter to me what you’re writing about. Are you expressing a fundamental truth or describing pain that your audience feels? Do they recognize themselves in what you’re writing? That’s what I mean by honest.

The second common theme in good writing is that it’s specific enough to be believable, but universal enough to be widely understood. So even if you’re writing about yourself or your own particular problem, or about the pain of a specific person, at the same time you’ve got to make it feel more universal than being just about that one person, to give the reader a reason to care.

The third thing about good writing is that it has a sense of style, a recognizable tone of voice. I’ve been editing marketing and PR professionals for a long time … and that [lack of style and voice] is the downfall of many professional communicators. They take themselves out of it too much. A lot of that has to do with the approval process and writing by committee, and all the things that I know communicators have to deal with. However, the onus is on them to be adamant that the writing has to feel like it’s written by a real person, that it has a recognizable point of view and some style.

Why is making writing a habit so important?

Writing well isn’t just about marketing, or a skill that you need for your job — it’s important in your life. You have to be able to communicate your ideas with clarity whether you are writing for a professional audience or just communicating your ideas in any format. Writing well helps you think better, because you’re thinking of the audience at all times.

When you adopt the habit of writing regularly, you get better at it as you go along. And your confidence increases — not only to express your ideas, but to express them publicly. Because when you do anything in public, it makes you vulnerable to criticism. Writing regularly helps you develop a more confident tone in your writing, which also gives you confidence to grow as a person and a professional.

Many people have the idea that writing is hard, which I think stops them from sitting down to write. But you can reframe how you think about writing.

What’s the best way to build a writing routine?

It’s as simple as committing to it. I hated going to the gym for the first few months, but I forced myself to get in the car and go. I had an accountability partner, my trainer, who would kick my butt if I didn’t show up.

I also have an accountability partner [for my work] who I meet with every week. We review what we’ve done and the projects we’re working on. I don’t work for him and he doesn’t work for me, but we are in the same industry. We help each other stick to our goals.

What are some common writing mistakes that you see?

Writing by committee is a real problem. It strips the humanity from any piece of writing. I talk to many writers who face this issue. A lot of it comes from the fear organizations have of appearing less professional somehow. So they write by committee, and it makes the writing boring.

The answer is to find great writers and let go of that fear. My life’s work has been to get companies to embrace the idea that their writing voices matter.

To learn more about the PRSA 2018 International Conference including programming and registration information, visit here.