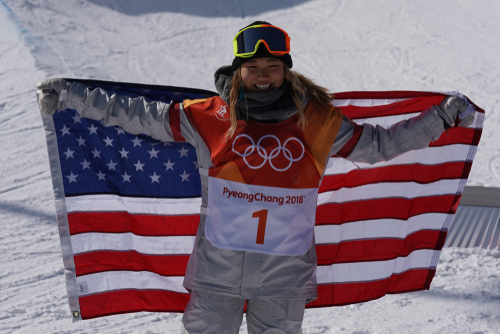 From Chloe Kim’s spectacular, gold medal performance in half-pipe snowboarding to Nathan Chen’s unprecedented five quads in figure skating, the 2018 Winter Olympics in Pyeongchang has offered exciting escapist entertainment and world-class competition for all. But for PR professionals, the Olympics are also an opportunity to monitor a variety of communications-related topics — personal branding, corporate sponsorships, new technology — on a universal stage.

PRsay talked with Hanna Bolte, APR — co-chair of PRSA’s Entertainment and Sports Communications Section — about NBC’s VR feature, her favorite commercials, and how Olympic athletes can maintain their brand equity long after the closing ceremonies.

What’s your impression of NBC’s presentation of the Olympics so far, specifically its social media coverage?

It’s been a really enjoyable, breezy experience. This is partly due to some of the new on-air talent — from Tara Lipinski and Johnny Weir to primetime host Mike Tirico. The faces and voices we are seeing look and feel different, diverse, young and individual.

The power of brand is front and center, with athletes as influencers, influencers as fans and the media creating a news feed. And there’s the new hashtag vocabulary. The change in voice and style has lightened and aged down a bit.

NBC has done a great job with the transitions from its many platforms, from primetime and morning shows to cable, social and streaming. It’s been a pretty flawless hand-over from event to event.

Regarding social media, the Snap feeds are great (and I like seeing how NBC is messaging and framing its social content) but it’s the unplanned social posts that truly capture my attention. For instance, comedian Leslie Jones’ posts are amusing — specifically her fashion commentary and her crush on Shaun White’s coach.

Thanks to social this isn’t like any other Winter Olympics experience. The expansion of those platforms is changing how we view and follow the games. You get the feeling of the fun now, in addition to the thrill of competition.

What do you think of NBC’s VR feature? Do you see it as a practical tool that provides a new perspective for viewers or is it more of an attention-grabbing ploy?

I think VR works with these enormous sporting events in that it helps bring a unique experience to the fore. I wouldn’t say it’s an attention-grabbing ploy, as it it provides a deeper fan experience.

I’m a VR fan but it’ll be interesting how the medium keeps these users post-games.

Adam Rippon has been a viral sensation this year despite not being the most spectacular figure skater at the Games. Considering his popularity, is it better for an athlete’s personal brand to be the best in their sport or the most popular among viewers?

I think it’s a balance. We’re witnessing the top caliber of athletes in each discipline. Their hope is to win gold, silver or bronze. It’s a validation of their talent and hard work, as well as an establishment of their equity.

At the same time, all the athletes are acutely aware of the financial branding possibilities that come with being an Olympic athlete when they return home. This is their job interview for future sponsorships and opportunities. They are there for their athletic prowess, but they need to have that popularity and engagement with viewers to build brand equity.

What are some examples of brands using their Olympic advertising platforms effectively?

Toyota has had a very successful branding campaign with their ads, highlighting both the Olympic and Paralympic teams. It was a super showcase of both inclusivity and the future of sports.

Visa has done a smart job showing personality and the competitive spirit of the athletes themselves. United’s superhero-focused ads are cute and I like how they’re rolling out different versions as the games progress.

I think the earned media winner, however. is the Winnie the Pooh franchise. You can’t buy better buzz than getting your character thrown at gold-medal Japanese figure skater Yuzuru Hanyu.