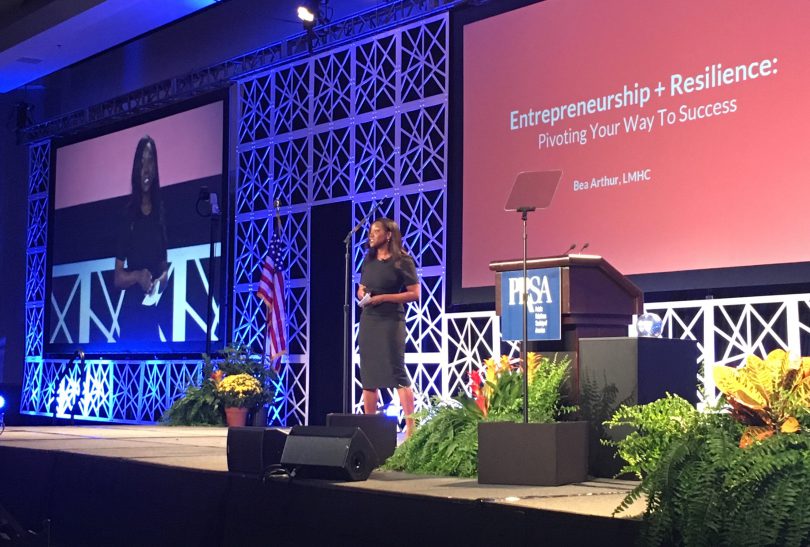 Bea Arthur’s one-sentence bio notes that she “is a successful therapist, entrepreneur and media personality.”

During her General Session today at the PRSA 2017 International Conference in Boston, Arthur had encouraging words for budding entrepreneurs.

“Anybody can do it. I did it. And I am literally not that special. I don’t have an MBA,” the founder of the think tank “The Difference” told attendees.

She was quick to note that she hasn’t always been so successful, that there is a trade-off for being a business owner.

“My last business put me in debt that would make your student loans blush,” said Arthur, speaking in particular to the PRSSA members in attendance. “I was so broke, I was evicted from my home of 10 years earlier this year.”

She admitted that her mind wasn’t in a great place. (She had also recently broken up with her boyfriend of two years.)

However, despite multiple setbacks in her personal and professional life, including a trying experiencing of getting rejected on ABC’s “Shark Tank” in 2013, she maintained a tenacious mindset that allowed her to continue to find success.

“That’s the thing — all you have to do is keep at it. Why am I here as a keynote speaker? Because I kept trying,” Arthur said. “The secret to success is resilience. Period. There’s nobody in the world who has made it who has had it easy. But they did have these three things: strength, stamina and stubbornness.”

In her estimation, stubbornness doesn’t get enough credit — it’s usually seen as a negative quality, especially in young women, she said.

“I’m a very stubborn somebody. But that’s what kept me going — that’s what kept pushing me,” said Arthur, a clinically trained practitioner. “It’s important to know that you have to have a single-minded obsession with seeing your vision in the world, otherwise it’s never going to happen.”

Arthur, who has run several ventures, including Pretty Padded Room, an online platform that virtually connects people seeking therapy to licensed therapists, took time to host a “Shark Tank”-type session during her presentation.

She invited several Conference attendees to pitch their business ideas. Arthur said that she’d write up the best-sounding company in an article for Forbes, where she is a contributor.

She listened to the various pitches and offered constructive tips, such as narrowing down an idea to five key points and eliminating jargon.

Arthur, who also serves as a “Fox & Friends” contributor, then shared thoughts from her experiences on “Shark Tank,” the popular series where budding entrepreneurs present their ideas to a panel of business titans.

For starters, it’s a long, arduous casting process. She described how excited she was for the chance to be on the show. Then reality set in. “It’s kind of like walking down a hallway and you think there’s going to be a surprise party for you. Then you open the door and get jumped.”

The “Shark Tank” rejection was difficult for her. “I cried a lot,” she admitted.

There was a five-month lag time from filming to the airdate. So she used that period to pull herself together (“I forced myself to get off my futon”) and find a business partner, in this case a CTO.

“I got to take some things off my plate that let me focus on growth,” she said. “By the time the episode aired, I was in a real position to not only lead the conversation about what happened in the episode, but also had the vision of my company to get me into a room to talk with investors in a different way than what they had seen.”

She ended her talk with something that she has learned from the ups and downs of her entrepreneurial career: “The best part of going through hell is that you come out on fire.”

John Elsasser is PRSA publications director. He joined PRSA in 1994.