Stuck with a story that’s not new? One way to create timeliness is to find a way to tie it in to a holiday.

Stuck with a story that’s not new? You already know that one way to create timeliness is to find a way to tie it in to a holiday.

Valentine’s Day may have come and gone, but St. Patrick’s Day, Earth Day and Mother’s Day will be here sooner than you know it. So, I wanted to share some lessons learned regarding how to approach holiday messaging.

While powerful and timely, holiday messaging can also be challenging. You’re not only competing for the scarce time and attention of journalists, you’re competing with all the other people pitching whatever’s relevant to the calendar item you’re chasing.

So, take a step back and consider ways to come at that holiday like no one else will. Here are two examples: one building on the holiday, the other (a little like this post) developing content after the fact. Valentine’s Day — Everybody pitches gift ideas, relationship research, restaurants — shoot, zoos are pitching stories about animal couples. But, nobody is pitching NERDY stuff on Valentine’s Day!

Last year, I stopped by to visit my old team at BYU where I used to help publicize student and faculty achievements. My former coworker Joe Hadfield was leading a discussion about some esoteric physics work that undergraduates were involved in. They create structures at the atomic level.

Joe looked at the calendar, saw Valentine’s Day approaching, and wondered. Physics isn’t a natural tie-in for the holiday, but what if . . . the physicists could make a nano-sized Cupid? He asked them, and they said “Sure.” 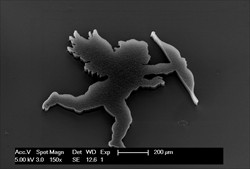 This photo taken through an electron microscope, was the key content element of the pitch that he started shopping a couple days before the holiday. And the geeks at Wired and CNET snapped it up, kicking off a cascade that went all the way to France’s second-largest paper.

Halloween — You can imagine the crush of calls to TV and radio assignment desks with variations on the same spooky stories during the run-up to Halloween. But there’s no competition for Nov. 1.

That’s why a medical clinic hosted a “trick-or-treat trade in” during the two days after Halloween. Kids could bring in their candy, combat childhood obesity and receive a movie voucher for every three pounds of sweets they donated. The collected candy is sent to overseas military.

For two years in a row, the story has found traction on “the day after.” Media relations pro Mary Rice and her team at Penna Powers Brian Haynes came up with the idea. I’ve since heard that it’s also used by dental clinics in other markets.

So, when you’re looking at your upcoming St. Patrick’s Day, Easter or Cinco de Mayo stories, consider unorthodox outlets to pitch, variations on the typical time element, or other counterintuitive ways to outflank your competition.

Michael Smart will be discussing a lot more of these tips and tricks for turning routine facts into compelling news angles at his Pitching Boot Camp in Chicago early next month. And the following day, he’ll cover ways to get on journalists’ and bloggers’ radar screens, even when you have nothing to pitch — that’s part of his Building Media Relationships workshop.