At the PRSA 2013 International Conference in Philadelphia, Ustream’s senior vice president of marketing, David Thompson, and the vice president of digital and TV entertainment at Emmis NY, Lin Dai, hosted a workshop titled “Live Video Meets PR and Advertising: How to Extend Your Reach and Win New Customers.” It became clear during the workshop that publicists are interested in integrating live video into their publicity plans, but many of them either didn’t know where to start or they already had a plan but weren’t sure how to get the best ROI. Integrating video into your B2B and B2C plans has been such a hot topic lately; we’re fielding inquiries like these more and more lately. And because we get questions like these so often, I decided to write an article highlighting David and Lin’s five points for how to seamlessly integrate live video into your publicity plan. 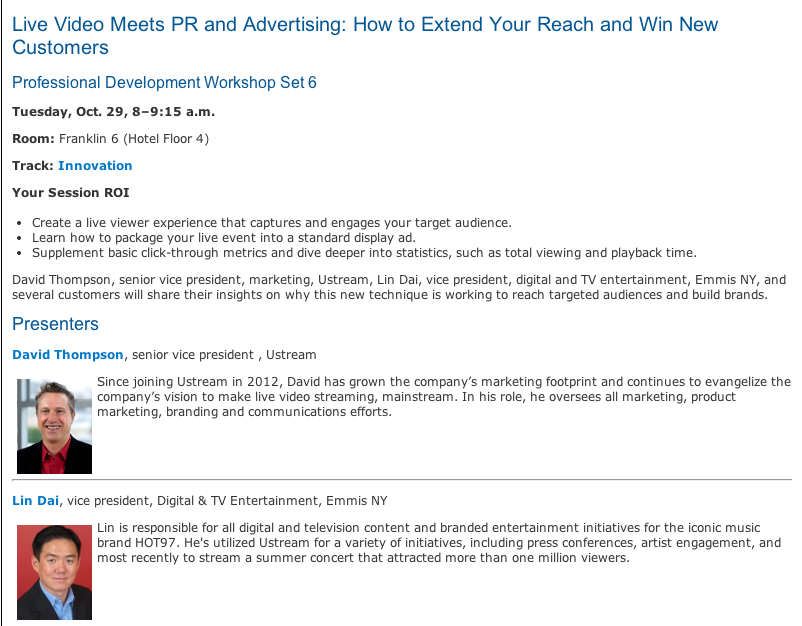 1) Create a more intimate experience for your audience.

With live video in the mix, your audience is not only experiencing your news or announcement live, they are actually seeing your spokesperson in person, rather than just reading a static quote on paper. If you also include a social media campaign, your audience can feel an even greater connection to your brand if your spokesperson answers questions tweeted during the live webcast (Ustream’s Social Stream provides this type of seamless integration). Whether you are a consultant, work in an agency or represent a business, videos make events, press releases, pitches and announcements more engaging for your audience. Creating a live experience that caters to your target audience is as easy as pressing “Go Live.”

2) Start with what you already do, and add live video to it.

You are already planning press events, product launches, branded content, custom shows, infomercials, webinar series and customer recognition awards — so why not just add video into the mix? Live video adds another layer of depth to your campaign, allowing your audience to expand outside of the office or pressroom and onto people’s phones, tablets and computers. Depending on how fancy or simple you want to get, it can be as easy as setting up a webcam and buying a microphone and some lights.

Going live boils down to four things: good lighting, a quality camera, speedy Internet and clear audio. You want your executive (or client) to look great, so testing these four items and being ready to go live at any moment will make everyone more comfortable. It’s always better to plan and practice before a crisis hits, so find the time to not only test the equipment, but to have your spokesperson practice on air so that they feel more comfortable in front of a camera.

BUT it is OK not to be perfect. The flaws can be endearing to your audience and ultimately make your spokesperson more relatable.

4) Measure the effectiveness of live video.

In September, we launched our new LiveAd feature, which combines the power of live video with digital advertising. The analytics integrated into LiveAds easily show you the power of live video advertising, featuring data that allows you to collect leads and monitor click-throughs, hover-overs, mute/unmutes, view times (imagine someone taking 15 minutes to read your press release!), and integrated Facebook and Twitter shares.

Ustream’s analytics console that is included with all channels also lets you see analytics in real time, including where your viewers are located geographically.

5) How do you keep the feeling of live alive, even if it is no longer live?

Many of you are trying to reach audiences across multiple time zones, so a live event in California may not seem plausible for someone to watch in Tokyo. With Ustream’s Live Playlists feature, you can easily put the original live broadcast on a continuous loop allowing the conversation on social media to continue on. 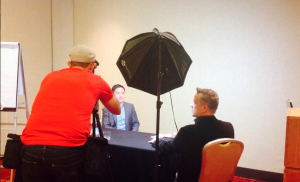 David Thompson and Lin Dai after their PRSA session

If you are still feeling iffy about live video, why not test it out? Next time you are at your child’s football game, or if you’re visiting a new location in your city, take out your smartphone, download the Ustream app, and “Go Live.” If that’s too much, then quickly stream yourself from the webcam on your laptop. You won’t regret taking a chance on live video.